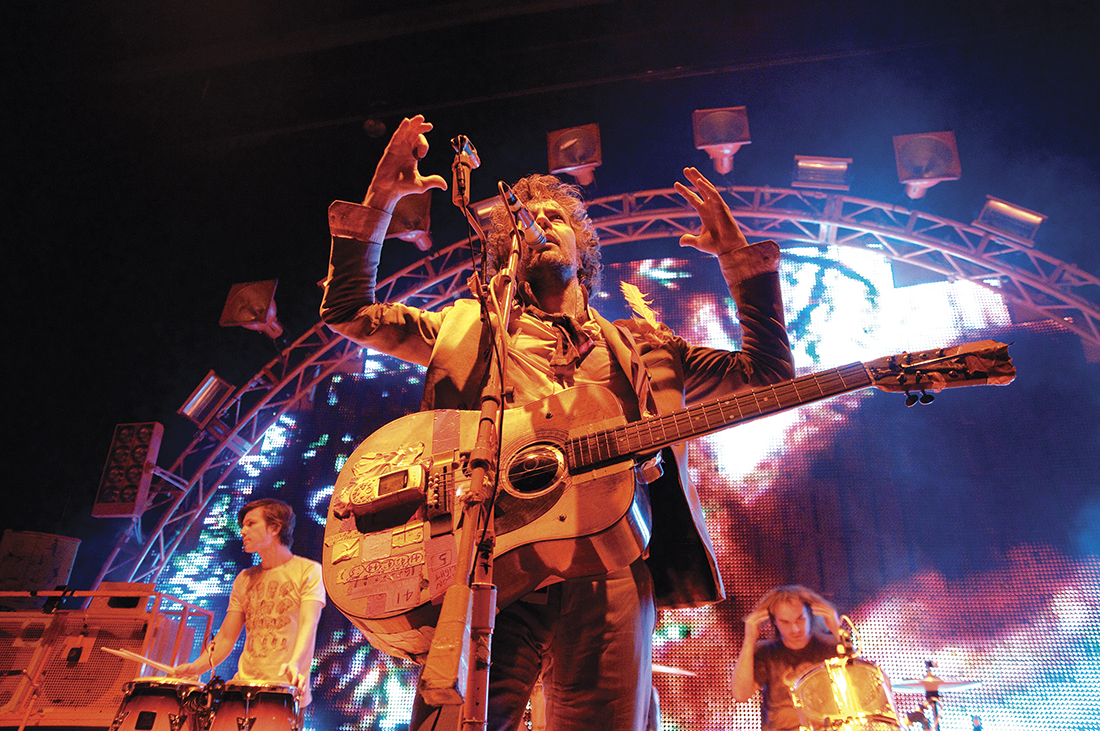 Flaming Lips
July 16
Acclaimed Oklahoma rockers Flaming Lips have made a career out of throwing listeners and critics for a curve. But the Lips as … cynics? According to initial reports, the band’s latest release, The Terror, had the band saying farewell to the warm and fuzzy optimism that fans have come to know and love, instead embracing more skeptical undertones.

Steve Martin & Edie Brickell
July 1
Well, this looks interesting: Steve Martin and Edie Brickell collaborating for a one-off project entitled Love Has Come for You. Considered a creative milestone by both artists, the 13 original “rootsy” compositions were co-written by Martin, an award-winning banjoist, and Brickell. The work is a stark departure from anything they’ve previously produced.

The Copyrights
July 4
The folks at 222 Ormsby have scheduled a July Fourth celebration with Illinois pop-punk headliners The Copyrights and local troubadour Maxx Gregg, who is running the show and hosting a cookout in true holiday tradition. Located in Mt. Oliver Borough, the show space is a hotbed for touring and Pittsburgh-based underground artists.

Dave Koz and Friends Summer Horns Tour 2013
July 12
Anyone in the mood for super-smooth jazz? Join Dave Koz and his friends for their summer tour. Koz will be kicking out summertime jams with such esteemed guests as Gerald Albright, Mindi Abair and ex-Tower of Power member Richard Elliot at Robert Morris University’s Sewall Center.

Dick Dale
July 21
Check out legendary surf-rocker Dick Dale as he tears through single-note staccato guitar histrionics that have influenced everyone from Jimi Hendrix to Eddie Van Halen. Dale also has been an innovator who developed new equipment with Leo Fender that helped push amplifier technology to new frontiers, so an evening with this near-mythical fretmaster should be one to remember.


The Long Knives
Holy Ghost Points
For Pittsburghers who prefer guitars set to stun, enter The Long Knives, a duo issuing direct and heartfelt pop overtures with thick layers of distortion. The Knives have that early-’90s indie-rock thing going on, making them one of those rare musical acts capable of evoking good noise from a few instruments. That The Knives can keep the intensity of a song such as “Burning Angel” through such smoldering numbers as “Roses & Rings” further demonstrates their ability to handle firm meditations in contrast with the white noise that permeates this release. Should you give The Long Knives’ Holy Ghost Points a listen? Most definitely. It wouldn’t hurt to take in a live show either.

Frizz
Tape
“Oh, cool,” I thought, as Frizz’s album opener “My Advice” cut blissfully to the chase with a tone of unforgiving and troublesome ribaldry. “I hope this keeps up.” It didn’t, which was fine — the record actually got better. Frizz nods off into “Some Noise,” where things get really trenchant and weird. The band has a knack for coiling itself around the songs without letting things get too personal. There’s something about the culmination of an album with a few knots existing upon the foundation of a common thread. Frizz does just that — with a few choice surprises that carry the listener out to the bitter end.