The Beat: Feel the Rush

The members of Canadian rock band Rush are making a pit stop at CONSOL Energy Center. 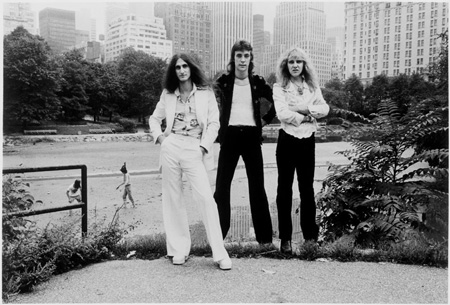 Sept. 11
Canadian prog-rockers Rush will be taking center stage at the CONSOL Energy Center in support of their latest release, Clockwork Angels.  Rest assured that extended drum solos, effects-laden guitars and esoteric lyrics delivered in high-pitched frequency will be the order of the night.

Sept. 1
Columbus-based trio Rascal Flatts is touring in support of the group’s eighth release, Changed, at the First Niagara Pavilion.  Since the boys’ previous albums have achieved platinum status, it’s safe to assume that they’ll be raring to go on this tour stop. Besides, the lead singer’s stage name is Gary LeVox (no, really). So I’d expect nothing less than high-falutin’ vocal pageantry.

Sept. 11
I’m sure that Pittsburgh’s under-30 hipster contingent has already marked this down on their iPhone calendars — but just a friendly reminder: Blue-eyed wonder Sondre Lerche will be performing at the New Hazlett Theater this month. Spanning numerous genres, Lerche has chiseled out a unique niche in the music world, with his latest release (Bootlegs) being a live album. So join this talented Norwegian for a night of swooning and perfect pop sensibility.

Sept. 13
Baltimore’s Wye Oak will be making a stop at Mr Small’s. And I, for one, am pleased as porridge, since my previous attempt to see the pop duo was stymied by a sell-out (obvious proof that this pair is popular). The duo is currently in the midst of a nationwide tour, so they should be in top form once September rolls around.

Sept. 22
Making their way to St. Vincent College for a sure-to-be-stellar Saturday night concert, the fellas of Third Eye Blind are returning after a quiet few years (their last album, Ursa Major, dropped back in ’09). Having sold millions of their albums worldwide, odds are that the crew will play such hits as “Jumper” and “Never Let You Go,” just to pump up their fans (new and diehard alike). That’s how it’s going to be.

The Adult Section
by The Karl Hendricks Trio
Don’t let the specs fool you: Karl Hendricks can kick butt. Not in the Saturday-night-bro-on-Carson-Street way, either.  More like the subtle tremors and brutal measures of honesty that Hendricks has written throughout the last two decades, deftly tracing steps from anger to sadness to humor like the off-kilter metronome that the pulse of every relationship — good or bad — is based on.  Songs such as “After Four Beers” and “Please Don’t” carry the weight of previous Hendricks fare, which is always welcome, considering the multitude of solemn carnival barkers dispensing their wares upon the musical landscape nowadays.  But what’s really impressive is the way the trio still sneaks in new ways to tell the maddening stories that should turn our hearts and minds against the lucky ones, the ones with the winning smiles, yet still leave us with some modicum of hope.  My guess is that, unlike those shrill voices pandering to the masses about palm readings and over-sized stuffed animals, The Adult Section leaves listeners feeling like they’ve won something worthwhile.

The Day the Volcano Screamed Death /Where the River Narrows 7”
by The Ceiling Stares
With boy-meets-girl vocals and guitars that zoom like a perfectly coifed pompadour, the Ceiling Stares answer the age-old question: What if the band X had left its sunny LA environs and set up shop in the Pacific Northwest? (Actually, I’d be willing to wager that nobody has ever asked that question.) The Stares’ latest release, a two-song single, certainly elicits such postulations. Take the dirge-y opening bass line shuffle of “The Day the Volcano Screamed Death” to side two’s up-tempo rocker, “Where the River Narrows,” and throw in some keyboards that call to mind latter-day groups such as Wye Oak and Beach House … and you get a nice mix of sounds that fall in and out of grace with the notion that a Pittsburgh band can, in fact, color our dear rivers with a fuzzier shade of green.