The Backyard Buzz: How to Harvest Your Own Honey

Honeybees are essential to our ecosystem, and the environment in Pittsburgh is ideal for cultivating your own hives. Local beekeepers are eager to share the basics to help you get started. 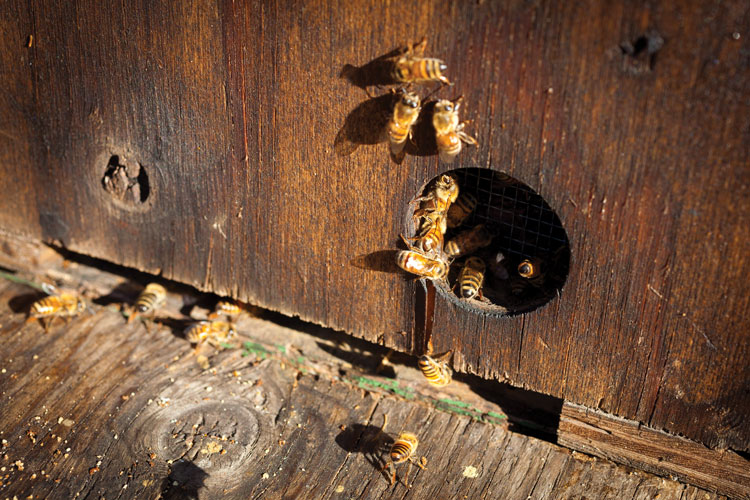 Through her career, WTAE-TV reporter Michelle Wright traveled to the Flight 93 crash site on 9/11, covered the Quecreek Mine rescue in 2002 and donned scrubs to observe a kidney transplant.

But one assignment took her from reporter to hands-on hobbyist to business owner. In 2007, Wright was assigned to report on colony collapse disorder, a condition in which adult worker bees abandon their colony and leave the queen and immature bees behind.

“As I continued doing follow-up stories, I became fascinated with bees and bought a hive and a protective suit and got started,” says Wright. She now maintains 15 hives at sites throughout western Pennsylvania, including the Sisters of St. Francis convent at Mount Alvernia in Millvale, a family homestead garden in Penn Hills and an organic farm in Evans City, Butler County. She’s looking to expand her operation this year.

Although Wright sells the honey produced by her bees and uses their beeswax to create body-care products for her line The Wright Stuff, she says bees play a far more critical role in the ecosystem than merely producing a versatile byproduct: Honeybees keep us fed by pollinating about 80 percent of the fruits and vegetables in our diet.

“We desperately need honeybees to keep providing the wonderful variety of things we eat,” Wright says. 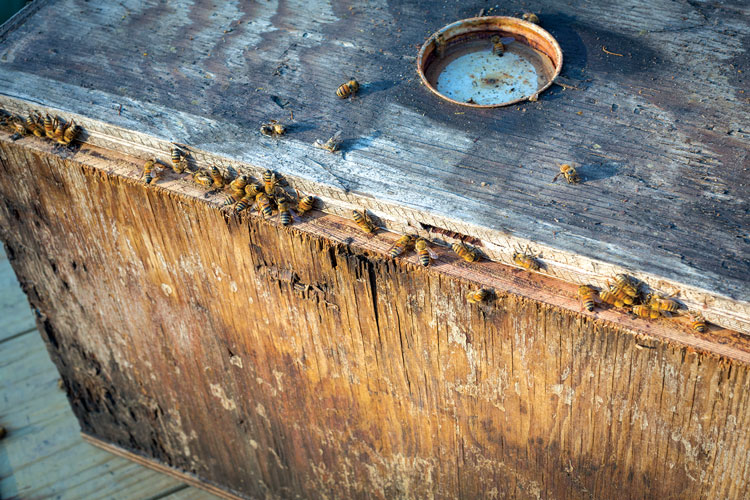 As more residents of Pittsburgh and surrounding communities integrate urban agriculture into their lives, they, too, are recognizing the essential contribution of bees to our food supply and the increasing risk that colony collapse disorder and other bee-related diseases — as well as other dangers such as pests, pathogens and pesticides — will endanger the species. In order to help save these insects, more people in western Pennsylvania and elsewhere are turning to backyard beekeeping, says Eastern Apicultural Society Certified Master Beekeeper Stephen Repasky. Rapesky owns Meadow Sweet Apiaries in Brookline, is the president of Burgh Bees in Homewood and vice president of the Pennsylvania State Beekeepers Association. 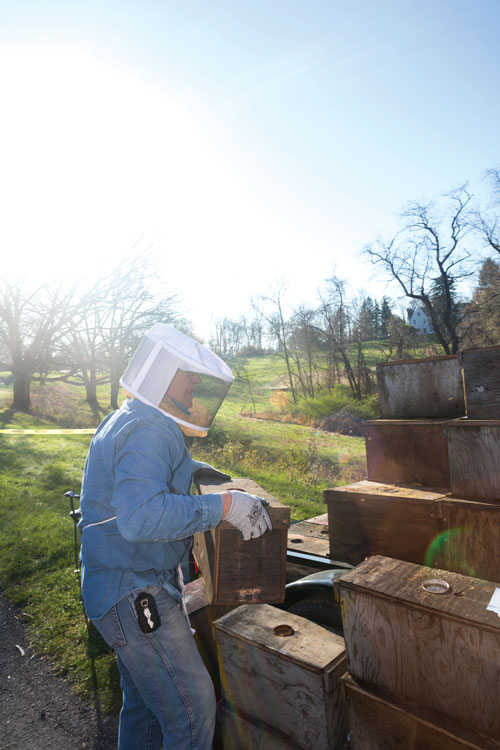 A volunteer unbands nucleus colonies, or nucs, in preparation for Nuc Pick-Up Day at Dundee Farm in Sewickley Heights.

“There is a big growth now for urban agriculture — everyone wants to go back to the grassroots, knowing where their food comes from and raising chickens and raising bees,” says Repasky.

He also says bees kept in an urban setting may be healthier than those raised in a rural setting. In Pittsburgh, pesticides are used less often — when compared to rural areas with farmland — and there’s easy access to rivers and green spaces.

There also are more plants available over a longer period of time in Pittsburgh due to the microclimates here — temperatures vary between regions, allowing plants to bloom at different times. This is beneficial for bees: They can access a variety of plants for pollination and honey production.

Although honeybees are self-sufficient, they rely on beekeepers — for management of diseases and pests — as much as beekeepers rely on them.

“Globalization has bombarded honeybees with viruses and mites, and they are very dependent on their natural defenses, hygienics and nutrition to try to keep themselves stabilized,” says beekeeper Christina Joy Neumann, owner of Apoidea Apiary in Shaler. “Anything we do in regards to water, good nutrition in the form of plants and anything that can give them an energy boost naturally is great.” 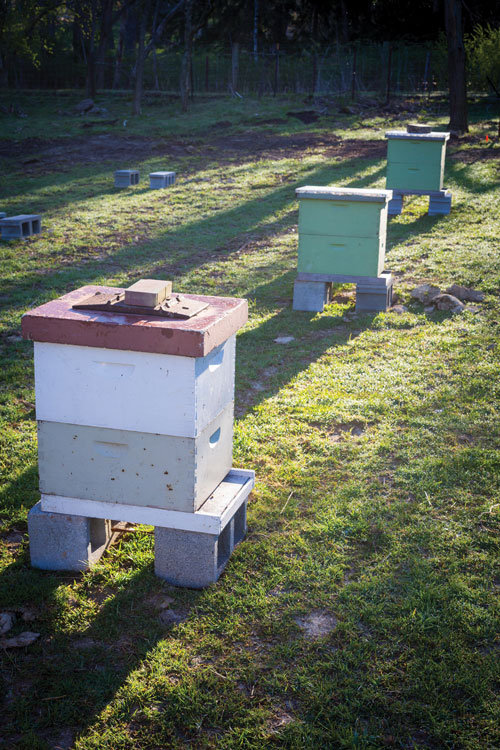 The Langstroth hive is one of the standard, frequently used structures in North America. Frames within the body of the hive make it easier to manage bees and extract honey.

Neumann studied architecture at Carnegie Mellon University. After college, she worked with termites while attending a workshop on biomimicry — a discipline that relies on patterns and strategies found in nature to devise sustainable solutions to human challenges. Termites, like bees, are social insects, so her transition from working with termites to keeping honeybees came naturally, she says.

Using her architecture skills, Neumann specializes in designing and implementing “bee gardens” and meditation gardens to help sustain bees and their lifestyle. At her triple-lot apiary on the homestead that has been in her family for five generations, her yard includes various zones for honeybees and other wildlife.

“Bees and flowering plants have a very ancient relationship of evolution, and you really can’t think about one without thinking about the other,” says Neumann. 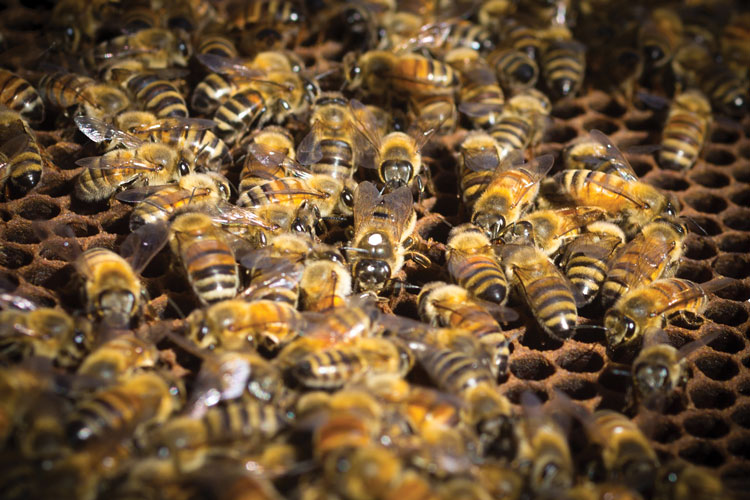 A small pond in the middle of her bee garden is shallow enough for bees to use for dissolving and diluting honey, evaporation cooling on hot days and drinking without drowning. A water source is necessary for honeybees and the other forms of wildlife that frequent Neumann’s garden. “When you’re designing for bees, you’re designing for a variety of wildlife,” she says.

To those who are interested in keeping bees and designing their own bee gardens, Neumann suggests diversifying their plantings. This helps to prevent disease that could ravage one species from affecting others. She also suggests turning over some of the lawn to forage plants, such as dandelions, and ground-cover plants such as clover.

Neumann harvests between 2,000-3,000 pounds of honey a year from 40-60 hives placed in eight yards around the region for the apiary. At Apoidea, she works to maintain and cultivate the gardens to ensure there are a variety of plants for the bees to pollinate and use for propolis, the substance from tree buds used by bees to seal gaps in the hive and varnish honeycombs. 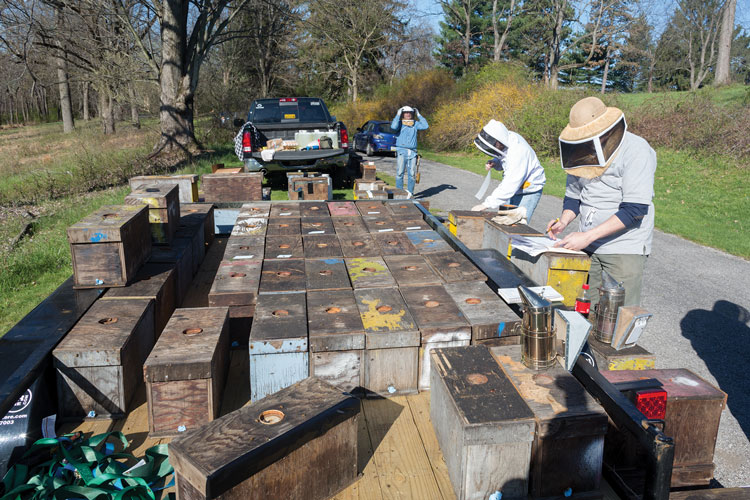 Repasky’s friends and fellow beekeepers volunteer to organize nucs for pick-up. Each nuc has five frames and includes a queen, bees of all ages, honey and pollen.

“We’ve been developing these gardens for maybe 15 years, and there is still constant evolution,” says Neumann. “It takes about 10 years to see a nice development.”
Repasky recognizes beekeeping as both an art and a science. To be a successful beekeeper, you first must learn the biology of beekeeping before you can appreciate the art, he says. At Meadow Sweet Apiaries, an urban bee yard, he oversees about 100 honeybee colonies.

A second-generation beekeeper who has worked with honeybees since he was 4 years old on his family’s farm in Apollo, Repasky recommends that new beekeepers start out with two colonies — a manageable size that also allows the beekeeper to compare and contrast the two hives. 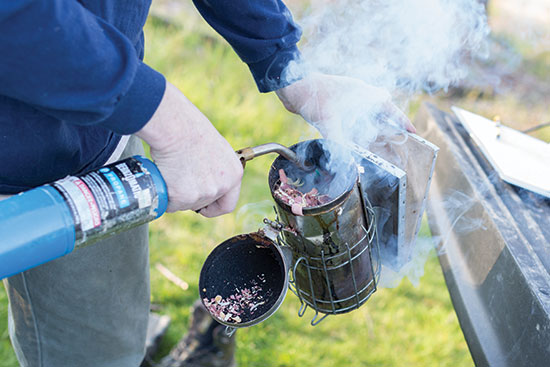 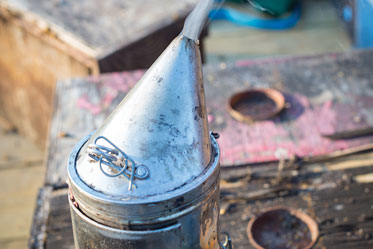 “It might take you two to three years just to learn the basics, and you can make a lot of mistakes along the way,” Repasky says. “The bees teach you a couple of lessons in the process. We never stop learning.”

​Repasky advises would-be beekeepers to find an experienced mentor and take a class in beekeeping, which may help them to be sure they wish to follow through. Some people may shy away from beekeeping after learning of start-up costs — roughly $700 to $1,000 for two colonies and equipment — but expenses will be minimal after that.

He also stresses the importance of becoming familiar with processes and regulations for both beekeeping and food production. After you install beehives, you must register them through the state Department of Agriculture and pay a $10 fee that covers two years; the fee does not change based on the number of hives or the number of locations where they are kept. Inspections of the hives occur biannually during the active bee season, which runs from May through mid-October. 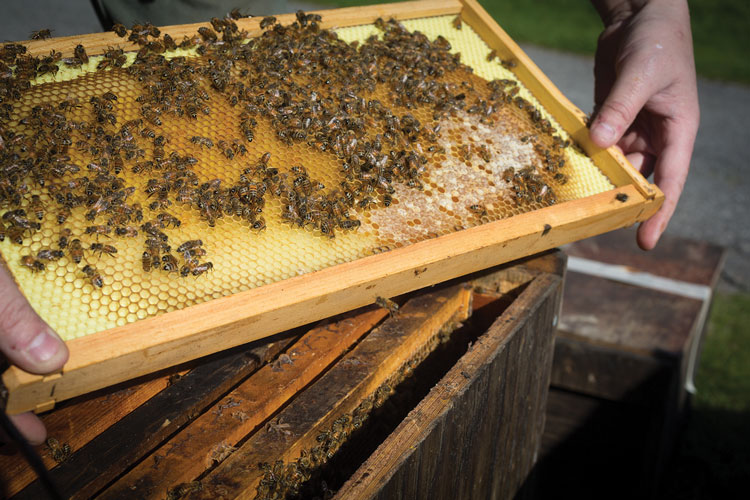 People who produce honey as a hobby without intent to mass-produce — such as selling it on-site or giving bottles as gifts — are not required to register with the state as a honey-production site.

“Roughly 85 percent of all beekeepers [in Pennsylvania] have less than 10 hives, so most are what we consider ‘backyard beekeepers,’” says Repasky.

Those who plan to sell through stores or boutiques, however, are required to register with the Department of Agriculture Bureau of Food Safety. Inspections of honey production facilities occur once a year. 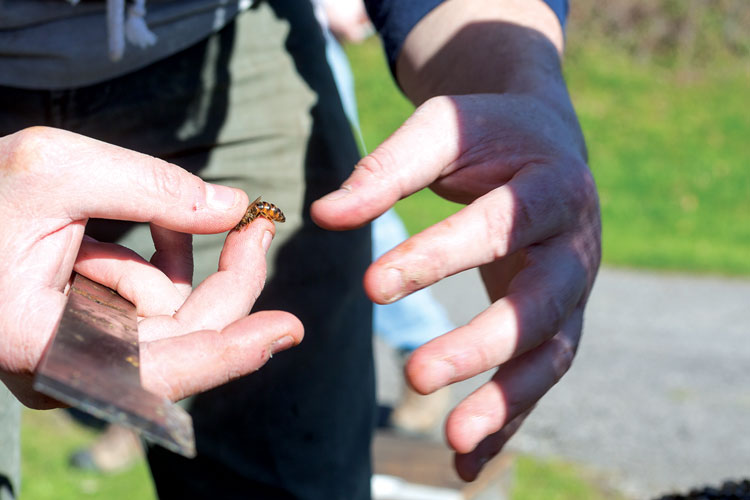 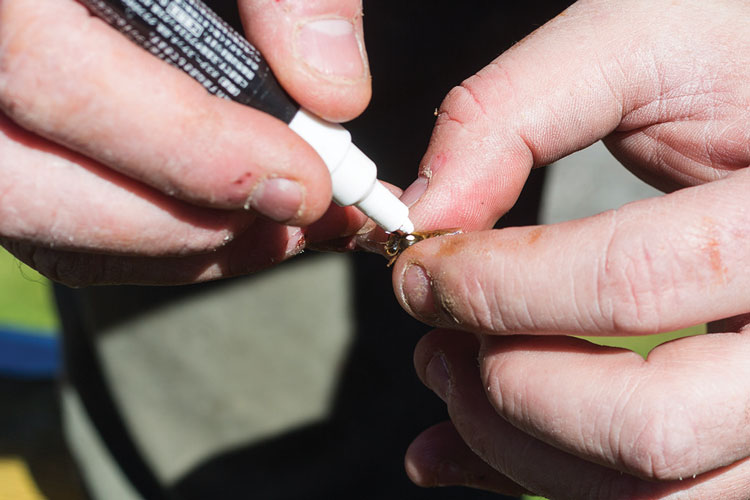 A beekeeper places a dot with a white paint marker on the queen bee for easy identification in the hive.

Random inspections also take place, sometimes during honey extraction or in response to a complaint.

As for Wright, her interest in beekeeping remains strong almost a decade after researching for her article. Her advice to prospective beekeepers?

“Find a mentor and take a class and be ready to get stung one or two times.” 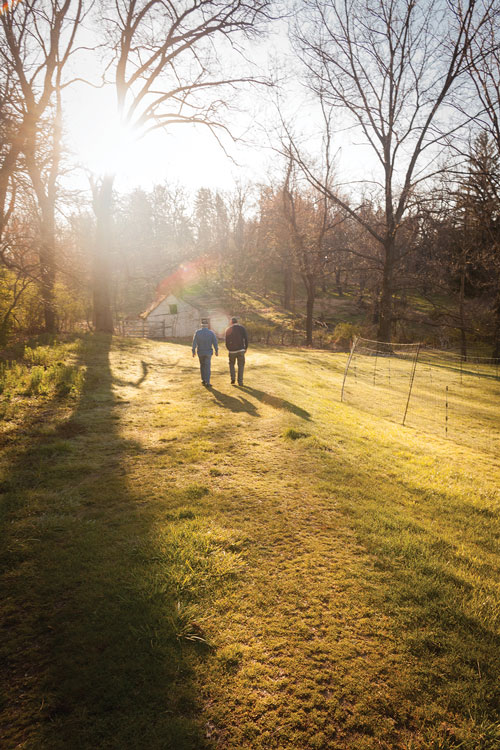 This article appears in the June 2016 issue of Pittsburgh Magazine.
Categories: From the Magazine, HOME + Design, Hot Reads