The Analyst Has No Clothes

Declared dead by TV chuckleheads a week ago, on the seventh day the Steelers rose again and the Ravens were eating crow. 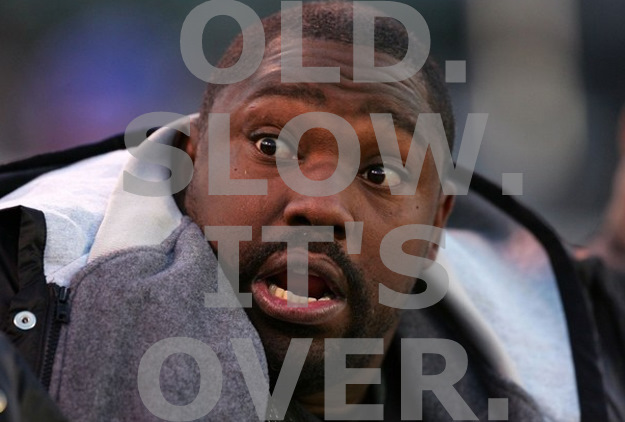 On Showtime's "Inside the NFL," a show that serves as a kind of soft-lit Elk’s Club for wild-eyed, self-satisfied NFL pensioners, former Pro Bowler and current Stay Puft Marshmallow Man Warren Sapp declared the Steelers' defense “old and slow" after Week 1. “It’s over,” he went on to say.

Now, I have come to accept this kind of shallow buffoonery from the emotional bullies at ESPN, but for a boutique product like "Inside the NFL," which exists solely to provide the sort of tangible insight and mental nourishment that our famished minds crave after ESPN’s steam-punk Speed Racer infographics whiz and whirl around us in our post-Sunday stupor, I except a little more maturity and restraint. Instead, Sapp is just another internet troll with a makeup artist.

While he’s indeed correct that the Steelers’ defense is old (they do in fact have the oldest average age in the NFL this season), an analyst who had actually done his homework may have pointed out that the Steelers had the second oldest defense in the league last season and somehow hobbled their way to Dallas for Super Bowl XLV.

An even smarter analyst would have pointed out that while the Steelers may be old and, yes, even slow, the zone-based defensive system which was been in place for a decade, and which has carried them to three Super Bowls, relies much more on anticipation and awareness than it does on speed. The Steelers rarely match up man-to-man. If the gaps in the Steelers’ defense are a little wider than usual, and they were certainly miles-wide against Baltimore, it has much less to do with the agility of Ryan Clark or James Harrison and more to do with mental errors, misjudgments or faulty reads.

And yet the wisest analyst of all, the proverbial one-eyed man in a blind world, would have taken in Sapp’s inflammatory comments, turned to the Showtime cameras and shrugged, “I don’t know, dude, it’s just like one game, you know? This league is bonkers. I literally haven’t the faintest idea what is going to happen each and every week. I am utterly clueless and that is precisely why this game is so much fun.”

Instead, Sapp’s compatriots cackled and hooted in rap-battle theatrics as he went on to say that his 13-year-old daughter could cover Hines Ward. Nevermind that anyone getting paid to enlighten fans on the game of football should know that Ward is effectively the third option in the Steelers’ passing game, the glorified slot receiver went out and made an absurd swan dive catch on the sidelines on Sunday to show that he’s still a factor. Ward was well covered on the play. It didn’t matter. If only Mercedes Sapp had suited up instead of catching the Dolphin Tale 3D matinee.

Here’s the trick to enjoying the NFL: Mute everything. Mute the television, the talk radio group therapy sessions and even your own expectations. The Media Industrial Complex of the NFL depends on unqualified speculation, overreaction and hysteria. Two days ago, the Baltimore Ravens were a media obsession, believers were testifying that Joe Flacco had made a Scott Bakul-ish Quantum Leap overnight and scientists had begun harvesting Ray Lewis’ joyful tears to develop a cure for Marino Malady and West Texas Chuckle Sickness (otherwise known as Deion’s Disease).

This weekend, the insurmountable Ravens were defeated by Medicare recipient Matt Hasselbeck, last scene at 4 a.m. as the BEFORE picture on a poolside Propecia commercial. Hasselbeck’s Titans slow-roasted the Ravens’ perpetually jacked-up, frat-swagger-powered defense for 358 yards through the air, and Flacco was transmogrified into his old dunderheaded self, chuck-and-ducking his way to a 47-percent completion percentage and two interceptions (his ESPN Total Quarterback Rating: Lackadaisical/Bootstrapless).

There was nuttiness abound in the NFL this week, and as the yellow dust of another Dorito-binged Sunday Funday settled onto your sectional sofa, every team in the AFC North was 1-1, every team's secondary looked downright geriatric—even the improbably stacked Eagles, who gave up four touchdowns to Ginger King Matt Ryan, and every team looked entirely beatable—even the defending Super Bowl champeens of Green Bay, who gave up 423 aerial yards to rookie Cam Newton and barely escaped from the smoldering cauldron of corporate luxury suites that is Bank of America Stadium in pleasant Charlotte, N.C.

Everyone is simultaneously terrible and dangerous. The NFL landscape is a lawless powderkeg of streaky gunslingers, mentally constipated coaches, inconsistent refereeing and an absolutely staggering amount of commercials for Papa John’s pizza and big-azz trucks. Those empty suits on the television screaming at you in verbal CAPS LOCK, telling you that they can make sense of this mess with statistical Ratatouille or simply because they played in this LEAGUE and can thus derive that a certain team JUST HAS THE LOOK, they are most certainly bluffing. 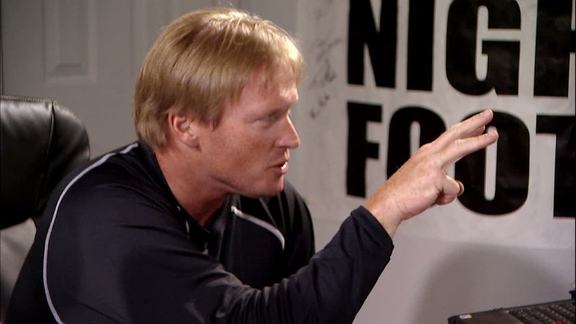 "THIS GUY really knows how to GRAB A SADDLE AND RIDE, BOY.
And what really sticks out to me about this guy? MANNERS."

Nobody knows anything, especially the analysts conducting free association with masculine words and playing with enormous gray-market iPad screens for hours on end.

As a fan, the only way to escape from this numbing echo chamber is to do the unthinkable: separate the game from the spectacle. Watch the games, then do something else. But then what? So much of what fuels the NFL’s popularity is the pomp, the sheen, the power rankings.

As Casablancas once theorized (the musician, not the film), America is a place where cities come together to hate each other in the name of sport. Would we ever really want to go back to a world without the flame-baiting chuckleheads? Do we secretly relish Warren Sapp saying that the Steelers are washed up and done?

More importantly, do the Steelers?

In the wake of the Week 1 humiliation, the chorus of Steeler Nation was, Stop Hatin’!

The quiet, sly response coming from the Steelers’ locker room was just the opposite: keep hatin’.  No, seriously, keep hatin’. For some reason, we need you to.

Despite the shellacking in Baltimore, the crusty old Steelers know this: They know they can win football games, even Super Bowls, when their quarterback isn’t at his best. The Ravens (not to mention the Patriots and Packers) don’t necessarily have that luxury. As far away as Baltimore's Week 1 success seems today, it may seem like decades ago when winter comes around and Flacco, the man with the 60.1 post-season passer rating, puts his trembling hands under center once more.