The 5W's of Bridal Parties

Here's all you need to know about trends and traditions in bridal-party etiquette. 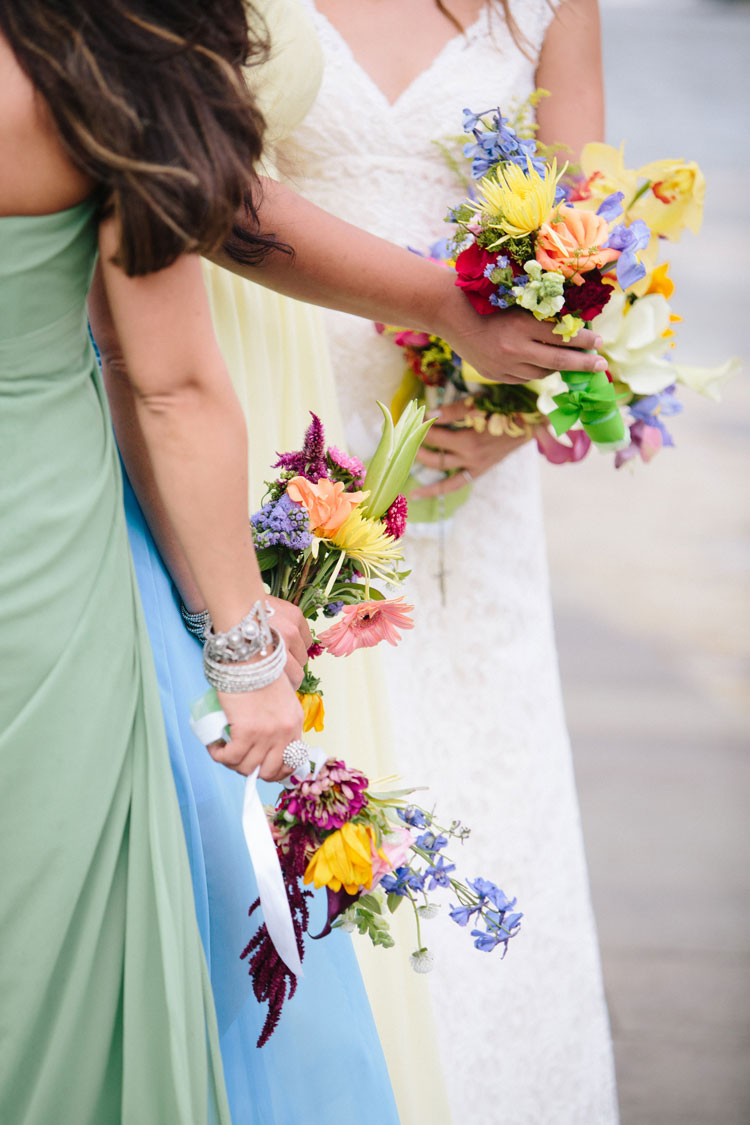 What are the ins and outs of participating in bridal parties? We consult experts and former brides to create a one-stop shop for answers. 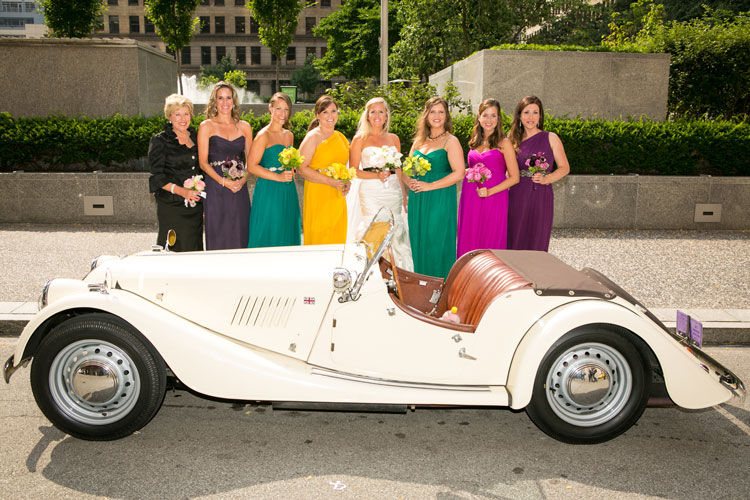 When a bride starts to plan her wedding, one of her first considerations should be to determine whom she wants to surround her on her special day. She must figure out who is capable of withstanding her Bridezilla moments, willing to fix her makeup when she cries before the ceremony and unafraid to hold up her dress in the bathroom.

Tim Komen, owner of TK Event Studio, says it’s best for brides to pick people who are encouraging and important to the couple, whether that adds up to two or 25 people.

One difficult aspect may be choosing between friends and family. According to Shari Zatman, owner of Perfectly Planned by Shari, a bride is not required to ask family members to be in her bridal party. But giving them another significant role — such as a reading during the ceremony or joining the bride and groom for a special dance during the reception — can help to make them feel included.

When it comes to including the groom’s sisters, Zatman recommends that the bride take the groom’s feelings into consideration. “First and foremost, it’s your wedding, and you have to do what’s most comfortable for you,” she advises.

Komen says the bride should include those she wants most to attend her, but he notes that including siblings of the groom in the bridal party can help to avoid potential in-law feuds.

Zatman says she has seen potential bridesmaids decline a bride’s invitation to join her bridal party for personal or financial reasons. “I’ve seen situations where somebody’s gotten pregnant or is already pregnant and might not feel comfortable in the dress or feel that they may not be reliable for bridesmaid duties,” she says.
Above all, Komen says brides should be sure they really know the women they ask to be bridesmaids beyond conversations by the water cooler at work. Often the bridesmaids who are asked out of obligation or aren’t close to the bride become the “squeaky wheels” of the wedding, he says. 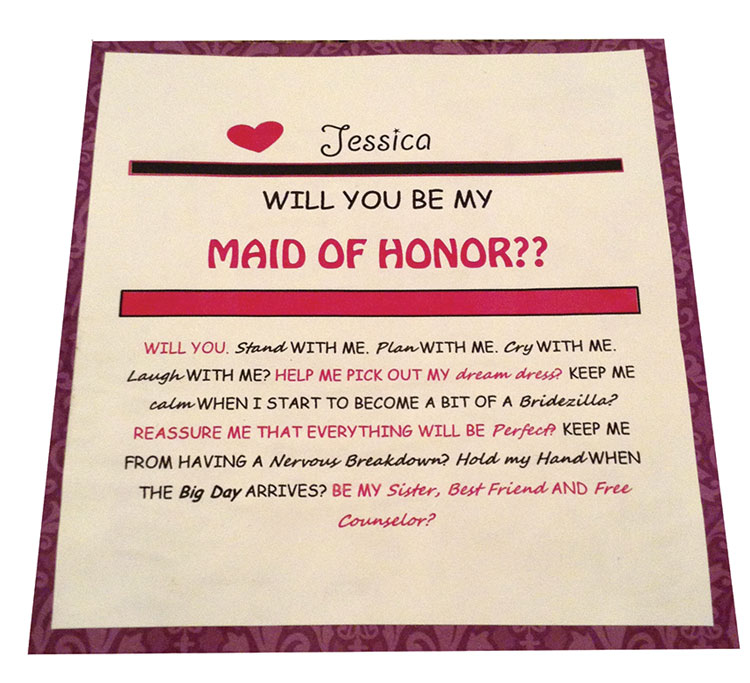 Zatman and Komen agree that choosing the bridal party should be a top priority for the bride and groom.

“Once you get engaged, you should sit down with your fiancé and discuss what the bridal party should be like,” Komen says.

Zatman says the time frame for asking the bridal party depends on the wedding schedule. It’s best to know between six months and a year in advance how many people will be in the bridal party because the number is helpful when speaking with the florist and other vendors. It’s one of the first decisions Zatman asks the couples to make.

A new trend has emerged in which couples plan creative “asks” to invite their friends and family to join their bridal party. These invitations should be personal and meaningful but also manageable, Zatman says.

“I think that trend has come a lot from Pinterest,” Zatman says.

Becky Ankeny and Joe Mandak, who plan to marry in spring 2017, enjoyed building the ranks of their bridal party.

Ankeny, of New Kensington, planned a Pinterest-inspired scavenger hunt, planting clues around her house that led to a room full of gift bags with a poem inside asking her friends to join her on her special day. 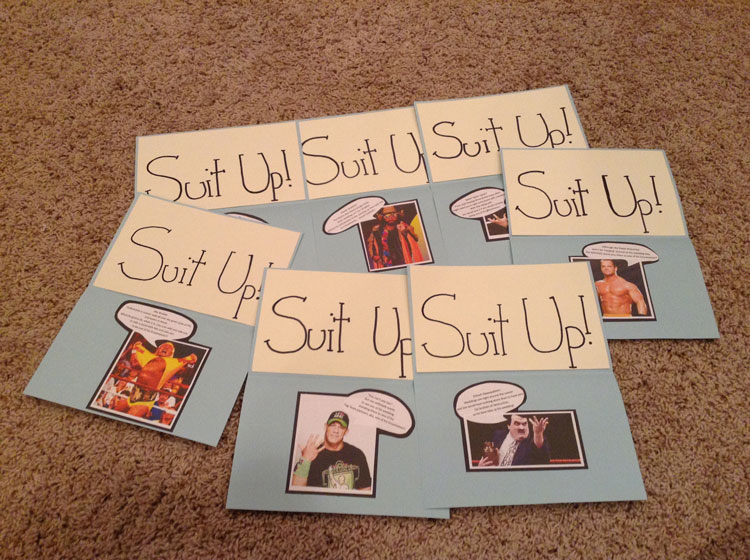 Mandak, a wrestling fan, slipped his potential groomsmen cards that featured their favorite wrestlers and urged them to “suit up” for his wedding. He hid one card in one of his brother’s Christmas gifts and concealed another inside a restaurant menu for his friend to find while they were dining.

He recorded each of his recipient’s reactions and later posted them on Facebook.

“It was definitely my fiancée’s idea. I just incorporated my own twist on it. That’s what makes us a good team,” says Mandak, also of New Kensington. 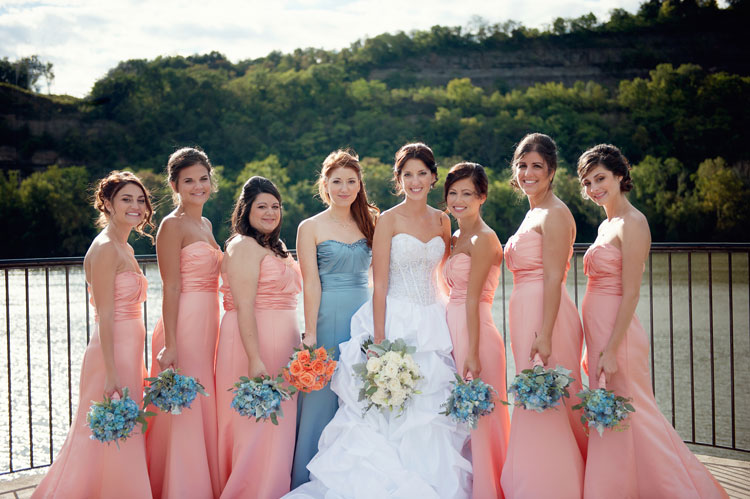 The days of bridesmaids leading the bride down the aisle draped in identically matching tulle monstrosities are coming to an end. Nowadays, brides often give their attendants more leeway to choose the style or color of their dresses.

When Amy Simon married Ryan Capcara on Sept. 13, 2014, at St. Maurice Parish in Forest Hills, she opted to vary the colors of her bridal party’s attire. Each of her bridesmaids wore the same dress in a salmon hue, while her sister, the maid of honor, wore the same style in sky-blue.
“I just wanted her to stand out,” Amy says.

Komen advises that brides choose a color and fabric but allow bridesmaids to pick the style because “all bridesmaids pretty much dislike bridesmaids’ dresses.”
Dana Burrows gave her bridesmaids free rein to choose the dress styles they wore for her vintage-themed wedding to Conor McCaskey on July 12, 2014, at The Pennsylvanian, downtown.

“A lot of stuff I do is not traditional. I wanted them to have a cohesive look but [with] individual style and [to] be comfortable in their dresses,” Dana says.
She and her bridesmaids agreed on crinkle-chiffon fabric for the dresses from Bella Bridesmaids in Upper St. Clair, but each woman chose her own style and color.
To tie them together, Dana made a gift of a beaded belt from Anthropologie to each bridesmaid who chose a dress for which a belt was suitable. To the others, she gave bold necklaces.

Shades of wildflowers inspired the bridesmaids’ dresses worn at the wedding of Patricia Borowski, who married Matthew Antram on Aug. 31, 2014. Patricia gave a color swatch to each bridesmaid and allowed each woman to choose the length and style of her dress. Patricia says she did so because she wanted her bridal party to be comfortable. She gave each bridesmaid an identical pair of shoes and asked them to wear silver jewelry of any kind.

“Sometimes when you force somebody into a dress that doesn’t fit their body type or skin tone, it clashes,” she says.

The groomsmen were asked to wear khaki pants and brown shoes and were given navy-blue striped ties, each with one stripe of color added to correspond to a bridesmaid’s dress.

Zatman says that kind of approach to choice and style within a color palette, while keeping shoes and jewelry similar, creates a pleasing aesthetic. 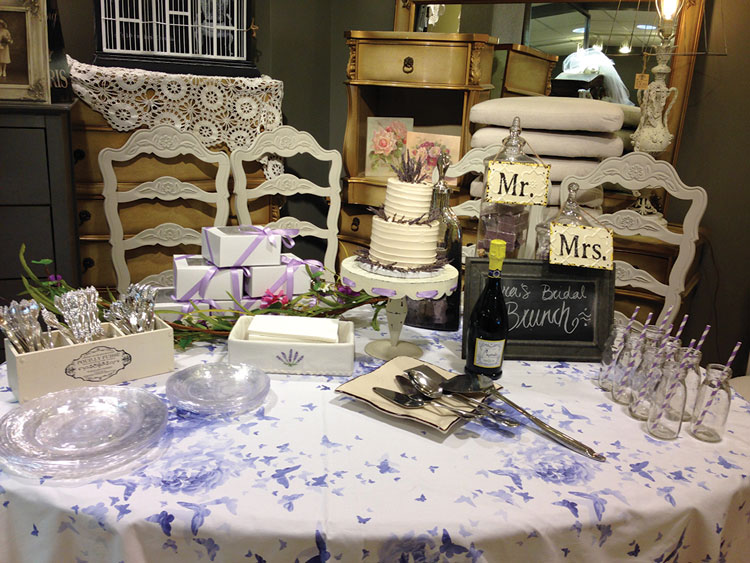 Brides looking to put a creative spin on their bachelorette parties might consider hosting a private event at one of the locations of Painting with a Twist, combining a painting class with the fun of a girls’ night out. A bride and her posse may bring alcohol and food into a private room, which accommodates up to 30 people. Painting with a Twist provides the artistic know-how along with games that allow guests to win prizes.

Bachelorette and bachelor celebrations also may be held at Latitude 360 in North Fayette Township. That venue offers adult party packages such as the “Ultimate Bowl and Bar” that includes two hours of bowling and an open bar for guests. Other packages include comedy shows or appetizers. Latitude 360 also has private rooms available to rent, a restaurant, a movie theater and an arcade.

Another artsy alternative a bride may consider is a workshop at IDEAS Vintage Market in Sewickley. IDEAS provides paint, and the guests may bring their own food along with furniture to refurbish. Store owner Judith Minegar recalls one bride who brought a dresser with seven drawers — one for each bridesmaid to decorate. 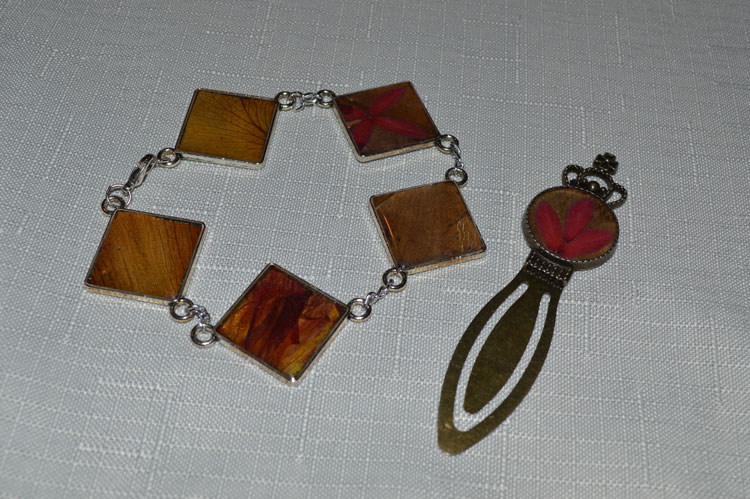 What to Pay for

It’s not required that the couple pay for the bridesmaids’ hairstyling and makeup on the day of the wedding. If members of the bridal party are expected to cover those costs, however, it’s best to advise them on a preferred style and let them schedule their own appointments.

Some couples present gifts to their bridal party to show their gratitude. Zatman recommends presents that may be used on the day of the wedding, such as personalized robes or hangers.

“It’s nice when things are useful and functional, and I love things that make great pictures,” she says.

Still, she says brides don’t have to give traditional gifts. Instead, the bride may opt to take her bridesmaids out for manicures or host a luncheon after the wedding.

After her wedding to Jonathan Morris on Sept. 13, 2014, at the Edgewood Club, Elizabeth Smith gave her bridesmaids a wearable keepsake. She dried the flowers from her bridesmaids’ bouquets and fashioned them into necklaces by placing them into jewelry bezels and filling them with resin. The resin hardened, preserving the pieces of the bouquets. “They liked that it was a gift they could actually use,” Elizabeth says.

If the groom and his party have a taste for fine cigars, the groom might consider giving his groomsmen a gift from the Cigar House in Verona or elsewhere. In addition to catering cigar bars, the Cigar House offers customizable gift sets for groomsmen with options of a collection of cigars, a traveling humidor, a cutter and a Bulova watch.