If you still call it the Sixth Street Bridge, turn in your Pittsburgher Card. 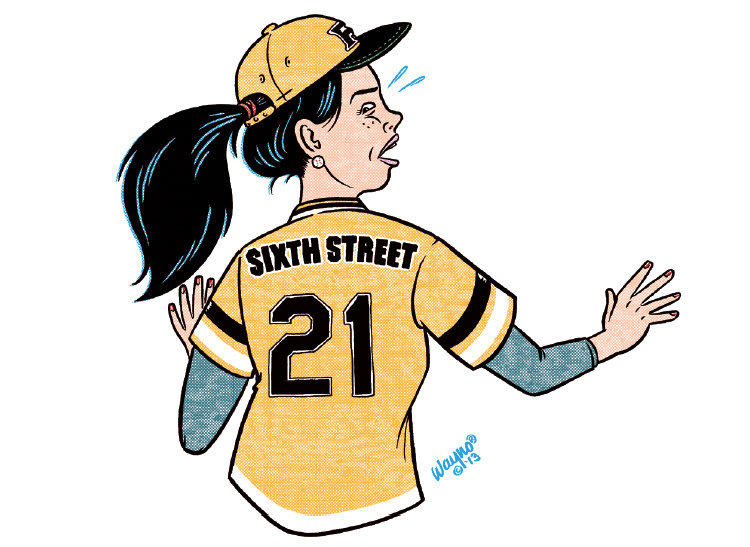 Making a Pittsburgh Left. Putting out parking chairs. Dropping “to be.” If we were playing “The $100,000 Pyramid,” this is the point in the game when you would shout, “Things that endear Pittsburghers to each other but drive people from other cities insane!”

It’s true. We value the Pittsburgh Left for its ability to keep traffic moving. We devolve into a state of absolute anarchy if the unwritten parking-chair rules aren’t followed. And “to be” is dropped routinely — it’s just a waste of words.

Another item we can add to that list: Pittsburghers’ collective refusal to call renamed places and landmarks by new monikers. You don’t work in the Regional Enterprise Tower, newbie; you work in the old Alcoa Building, even though it hasn’t served as Alcoa’s headquarters for more than 12 years.

We give directions by referencing “the old Horne’s building.” Or if you’re really committed to this quirk, “Turn left where Forbes Field used to be. If you hit where Luna Park used to be, you’ve gone too far.”

I get it. I’m guilty of it, too. When the Civic Arena was renamed Mellon Arena, oh, how I laughed. “Good luck getting anyone to call it something so ridiculous.” I stubbornly and intentionally called it the Civic Arena for years after the retitling. I was sticking it to the corporate man.

Without Googling it, I honestly couldn’t tell you what the heck they’re calling the Star Lake Amphitheater nowadays. UPMC Place? Luke Ravenstahl’s Taking-Care-of-Business Amphitheater? (Or does that phrase only appear on the city’s $1,000 trashcans?)

While it is arguably endearing that Pittsburghers cling to the past and refuse to acknowledge the present, I must make the case that sometimes we should put away the old and embrace the new — especially when the new name pays tribute to such a beloved Pittsburgher as Roberto Clemente.

It bothered me to no end that the Pittsburgh Cultural Trust referred to the “Sixth Street Bridge” in its news release for “The Rubber Duck Project” press conference. It hasn’t been called that for years, as it was formally dubbed the Roberto Clemente Bridge in the late ’90s. There isn’t a single Sixth Street Bridge sign downtown — or on Google Maps for that matter.

Frustrated, I wrote a scathing, eloquent letter to the editor at the Pittsburgh Post-Gazette in which I … Ha! Yeah, right. Actually, I whined about it on Twitter because that’s why Twitter was invented. Some folks agreed that it’s time everyone got on board with the new designation. Others said, “Hey! It was the Sixth Street Bridge forever. You need to allow at least one generation to pass before you can expect it to be widely called by its new name.”

Are you kidding me? Are you telling me that when a woman weds and chooses to take her husband’s last name that she can expect to be dead of old age before anyone bothers to call her by her married name? Are you telling me we’ll accidentally write 2013 on our January checks for a few weeks — at most — but it will take an entire generation to pass before we will call a bridge by a name that acknowledges a hero?

This is not Snoop Lion Doggy Dogg Hedgehog Owl changing his name every time he moves his bowels. This is not the year of our Lord changing its name every 365 days. This is an iconic bridge whose name was changed once more than a decade ago. At this point, if you’re still calling it the Sixth Street Bridge, you’re just stubbornly refusing to put forth the same effort you do when writing the correct year on a check in early January.

The bridge wasn’t named for Wiz Khalifa or Sauerkraut Saul. It was named for a man who practiced generosity and kindness; he fought against racial barriers, brought baseball glory to Pittsburgh and died while doing a brave, selfless act. I feel as if he deserves your extra split-second of effort to mentally change “Sixth Street” to “Roberto Clemente” before the words leave your mouth.

I know. You don’t like that I called you stubborn. You want to argue that it’s habit, not a choice, that makes you call the bridge by its old name. You want to tell me that in some official PennDOT listing rotting away in some dusty back room in Harrisburg, it’s still named the Sixth Street Bridge. You want to vent about it and yell at me.

You can send your angry tweets to @lalalala_ICantHearYou.

I can’t wait to read them.

This article appears in the December 2013 issue of Pittsburgh Magazine.
Categories: From the Magazine, Hot Reads, PittGirl