TEDxCMU Gives Some of the World’s Brightest Minds a Microphone

The independently organized event challenges innovative thinkers to give the talk of their lives. 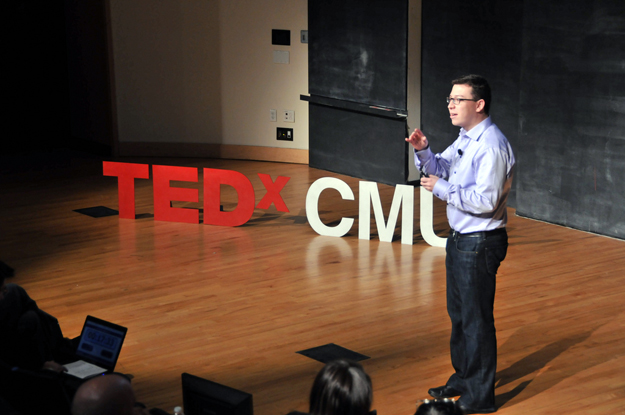 MacArthur Fellow and Professor of Computer Science Luis von Ahn clicks a wireless presentation remote and an early CAPTCHA image appears on the screen behind him in Carnegie Mellon’s packed McConomy Auditorium.

"How many of you find that really, really annoying?" he asks into the mic clipped to his blue button-down shirt. The audience laughs. CAPTCHA—those squiggly words that make Internet users prove they are indeed a human (and not a spam-bot) on over 350,000 websites—is nothing if not really, really annoying. The laughter is genuine, rather than polite. In the quiet moment after, von Ahn adds, “So, I invented that.”

Pittsburghers probably best know CMU’s 400-seat McConomy Auditorium as the site of late professor Randy Pausch’s “The Last Lecture.” Imagine, then, an entire day of last lectures, an entire day of people with the utmost passion for their daily work and dreams, all on McConomy’s stage.

That day will arrive on March 4, 2012, with the fourth annual presentation of TEDxCMU.

TEDxCMU is an independent branch of TED (Technology, Entertainment, and Design), the latter a conference founded in 1984 that is now held annually in Long Beach, California. At TED, leaders in every imaginable field give “the talk of one’s life.” And so people ranging from best-selling writer Elizabeth Gilbert to pop sociologist Malcolm Gladwell to former president Bill Clinton are given up to 18 minutes to talk about the ideas that consume them.

For von Ahn, his passion starts in CAPTCHA, or, more accurately, in the next iteration — dubbed reCAPTCHA. While users may complain about having to type in two confirmation words instead of one, the additional layer of verification is actually for a good cause.

In the 10 seconds users spend typing that second word, they have taught a computer a word it didn’t otherwise recognize when trying to digitize a physical book. Newer books are easier to digitize, but paper and ink quality both fade over time and 30 percent of words in books published more than 50 years ago can’t be recognized by current technology. With reCAPTCHA technology, about a hundred million new words are digitized per day — the equivalent of about two and a half million books per year—all from the manual labor of unaware Internet users.

More than 750 million people (approximately 10 percent of the world’s population) have assisted in the digitization of books via reCAPTCHA. In his talk, von Ahn notes that humanity’s biggest projects—the pyramids in Egypt, the Panama Canal, putting a man on the moon—have all involved about 100,000 people.

His hope? To translate the entire Internet into every major language. For free. Von Ahn figures that to translate Wikipedia from English to Spanish with 100,000 active users would take five weeks. With one million users, just 80 hours.

TEDxCMU’s 2012 theme is reinterpretation, which, their website says, “is the key to innovation.” The team running the event is made up of 15 CMU students, both undergraduate and graduate. Some of the speakers are local, but all are geared toward what makes CMU so very CMU: 20-something entrepreneurs (Matthew Manos), world-renowned CEOs (Gil Taran) and influential creative forces (blogger Gala Darling).

Because seating in McConomy is so limited, CMU made tickets available through an application that asked prospective attendees what they hoped to gain from the event. TEDxCMU, however, posts videos from past conferences to their website, and there’s always the chance that one might get picked up as an official TEDTalk, which happened with von Ahn’s presentation.

The exposure from the TEDTalk release means great things for von Ahn’s real passion. He estimates that 1.2 million people around the world are currently learning a foreign language. His endeavor, Duolingo, allows for those people to (rather than drop $500 on language software) use learn the language via translation of the Internet. Duolingo, now in private beta, is in high demand.

“People are creating value with learning,” he says, and the audience cheers.