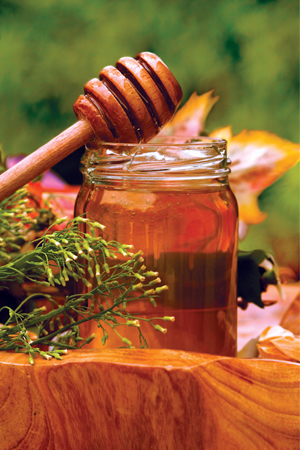 As the leaves begin to change, bees begin to harvest deep amber honey, the kind you can only savor during autumn. “It is very dark in color, full of antioxidants and very rich in flavor,” says Stephen Repasky, director of ‘Burgh Bees Apiary, an urban beekeeping organization established “to educate beekeepers and promote beekeeping as a vital part of sustainable agriculture in Pittsburgh and its suburbs.”

Repasky says the types of honey the bees produce change with the seasons, depending on the nectar of the source flower.

“Fall honeys will also crystallize faster than spring and summer honeys due to higher amounts of glucose and lower amounts of fructose,” he says. “Some people prefer crystallized honey because it’s easier to spread.” And spread you should: Honey produced in the fall is perfect for baking or basting, having perfect flavor and consistency. And who doesn’t love a warm honeybun to ease the cold-weather blues?

With the holiday just around the corner, October is the perfect month to stock up on a fresh supply of locally produced honey. “Buying local honey is the only sure way of knowing where your honey comes from,” Repasky says. “The taste is outstanding, the health benefits of the enzymes and antioxidants are all-natural and you are supporting Pennsylvania’s largest workforce: the honey bee!”

Whether it’s through a tasting or by creating a specific dish made with a uniquely flavored honey, foodies are finding ways to celebrate the many varieties. A sought-after local fall variety made from Japanese knotweed is marketed under the more enticing name of Red Bamboo. It yields a dark, richly colored honey with a surprisingly mild taste; it’s an exception to the rule that darker honey tends to have stronger, more pungent flavors.

Because it’s not produced elsewhere in large quantities, Red Bamboo honey is popular with out-of-state sources as well as locals and tends to sell out quickly. There aren’t other suppliers for this honey, so when it’s gone, that’s it until next year’s harvest. Fortunately, it’s not the only local fall honey—there’s also Goldenrod, a dark honey with a strong, sweet flavor that’s harvested after Red Bamboo.

With so many interesting fall honeys on the market, there are plenty of reasons to sample local honey slathered on buttered toast or in easy recipes (like the one below). Turn the page to get the goods on local (and global) single-flower honeys and where to find Red Bamboo, which usually appears in markets around the middle of this month.

Figs and honey have been enjoyed in combination since antiquity. For something new, try a dollop of this sweet and creamy spread on a cool, crisp Fuji apple slice, topped with a lightly toasted walnut. Each bite captures all the flavors of fall.

Remove the tough stem and non-stem end from two dried Turkish figs (about one-and-one-half ounces) and chop them roughly. Using a small food processor, combine the chopped figs with a half-cup of plain, mild-tasting, soft white goat cheese (do not purée). Transfer to a small bowl and beat in one teaspoon Goldenrod honey. Meanwhile, cut a large Fuji apple into eighths and lightly toast one-quarter cup walnut pieces. Top each apple slice with a dollop of the honey-fig spread and garnish with a toasted walnut. This is a perfect snack or dessert for two. 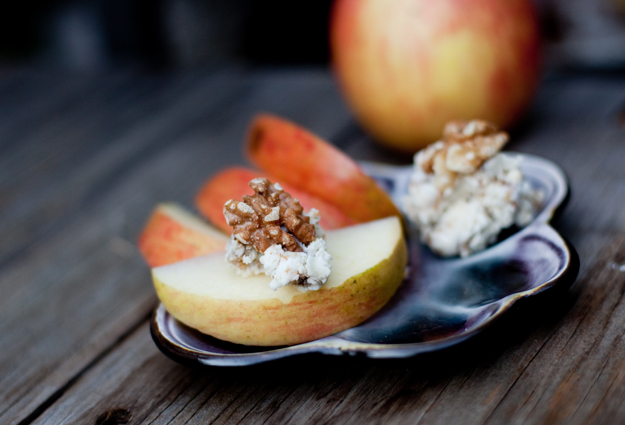 Sample each type by dipping a toothpick into a small ramekin, or lightly smear honey onto plain crackers. Many producers make local honey and sell their wares at farmers markets such as Farmers @ Firehouse in the Strip District. All of the honey varieties below (listed in the order they will be produced—from fall through next summer) are made by Maple Valley Farms. Look for its honey at the East End Food Co-op and Cafe in Point Breeze, Soergel’s (Franklin Park) or Shenot’s Farm Market (in Wexford), and McGuinness Sisters stores.

Red Bamboo
Also known as knotweed honey, Red Bamboo is available in October after being harvested locally from late August through September. Its flavor is unusually mild for a dark honey, with no discernible aftertaste.

Goldenrod
This dark, strongly flavored honey is harvested locally in autumn after Red Bamboo. It’s popular among those who believe that eating raw honey, which may contain bee and pollen residue, can help combat seasonal allergies.

Clover
Sweet and light-tasting, this amber honey is among the most familiar varieties. Locally produced in June, clover honey comes from 3- to 6-foot-high yellow-clover plants, which has flowers with very tiny petals (rather than the typical Dutch clover you see in your neighbor’s yard).

Locust
This is the first springtime honey produced in Western Pennsylvania. Made from the blossoms of the locust tree, this sought-after pale amber honey carries a flavor reminiscent of the sweet locust blossom, often mistaken for honeysuckle.

Buckwheat
This late-summer bloomer produces a dark and very strongly flavored honey with a tangy note. Its taste is so assertive that it’s sometimes used in place of molasses. Like Goldenrod, it’s excellent for baking (darker honey generally stands up better to the heat).