Tales from The Old Silt: Life On the River in Pittsburgh

At 84, Vince Hammill still serves as the captain of the Katie H, a sternwheeler he refurbished in the 1980s and has been piloting up and down Pittsburgh's rivers ever since. 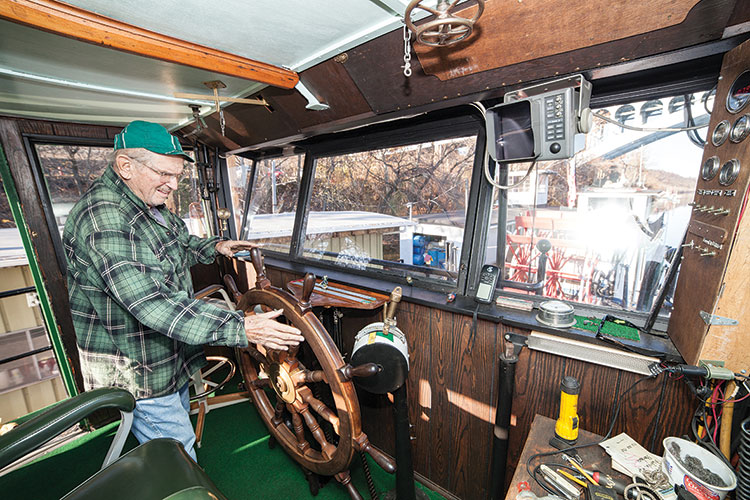 Vince Hammill was born in 1932, in the same year as his boat.

Back then, before it became one of the only remaining sternwheelers still plying the rivers around Pittsburgh, the boat had a different name. The Owassa was an unremarkable propeller-driven towboat launched at Cape Girardeau, Mo., which eventually found its way up the Ohio and Monongahela rivers to U.S. Steel’s Clairton Works. 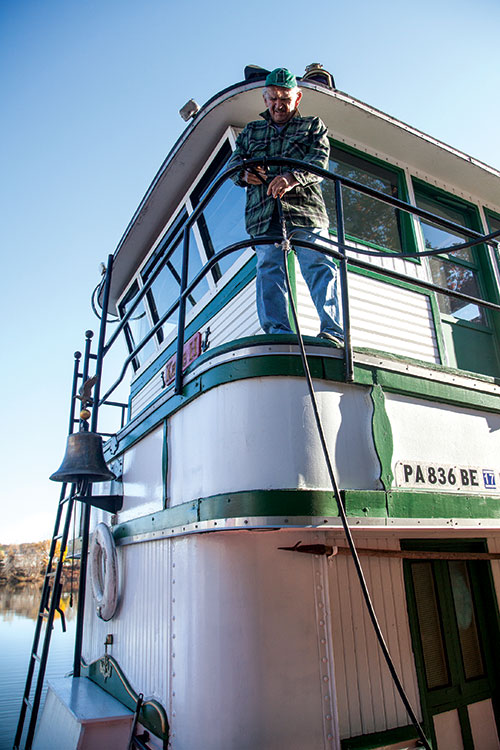 ​Hammill went by another moniker too, long ago. His classmates who cheered from the stands at Shaler High called him “Ivan the Terrible” in 1950, when he was a bruising running back scoring winning touchdowns against such rivals as Etna and West View. During summers in those days, he and his pals would scramble down to the riverbank when they spotted the lumbering sternwheelers pushing barges of iron ore to U.S. Steel’s Isabella furnace in Etna. “We’d swim out and ride in the waves,” says Hammill, 84. “Everybody had their dedicated log to hold onto. They put out waves three-, four-foot high, those old sternwheel boats.”

He stuck close to the rivers, taking jobs as a deckhand on the paddle wheelers, and then becoming a commercial diver specializing in underwater welding and salvage. In 1962, he bought a busted-up towboat that had careened over the Emsworth Lock & Dam backwards and had lost its pilot house in a collision with a railroad bridge. Fixing it up to be his workboat, Hammill renamed it the Katie H after his mother: “A hell of a woman,” he says. “A little midget, but tough.” 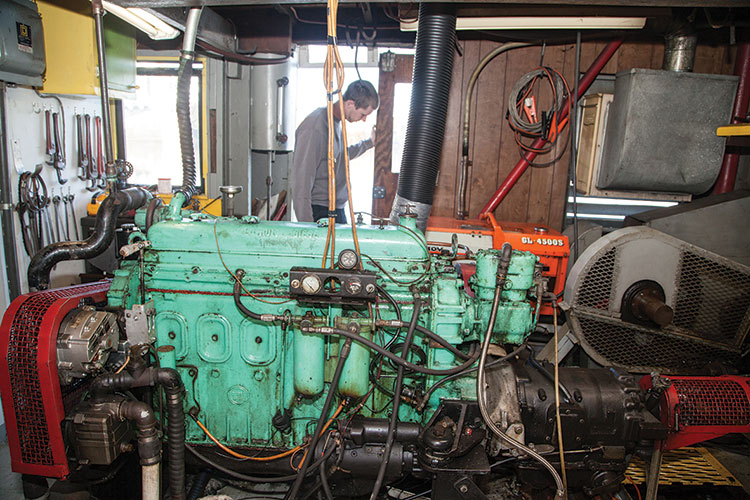 Around 1980, when Hammill decided to realize his dream to be captain of an old-fashioned sternwheeler, it took the better part of a year and a lot of visits to junkyards to transform the Katie H. He chopped off the back end as well as its propeller, fashioned a paddle wheel out of scrap steel, and pulled a replacement engine from a diesel-yard locomotive and a transmission from a garbage truck.

It was about that same time that he began seeing Janet Ferber, a waitress in Sharpsburg — divorced like him. She remembered him from his “Ivan” days. Love blossomed, and they’ve been a couple ever since, though they resolved long ago that one marriage each was enough for both of them. Ferber, now 76, lives with her 84-year-old boyfriend in the same Shaler house where he grew up. But weather permitting, they’re more likely to be found down at the Katie H’s dock, in the shadow of the 40th Street Bridge. A round life preserver with their names painted on it from the 1987 Ohio River Sternwheel Festival hangs prominently on the front of the boat. “You take the river away from him, you might as well shoot him,” Ferber says. 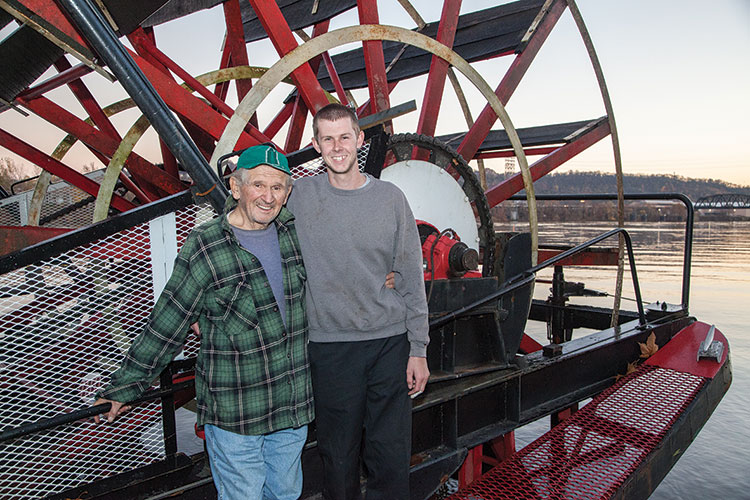 In recent years, with Hammill’s eyesight fading, the couple increasingly rely on Jeremy Meinert, Ferber’s grandson, to take the helm. Children from their first marriages and seven grandchildren all have spent time on the Katie H through the years, but Meinert, 22, of O’Hara, is the one who loves it the most. Hammill taught the boy both riverboating and welding, which Meinert now does for a living. “I rate him a nine out of 10,” he says of the young man’s piloting skills. “I ain’t gonna give him that last one.”

Meinert is officially the pilot and engineer of the Katie H, not the captain. But that hasn’t stopped him from ascending the hierarchy of vintage riverboat enthusiasts. He joined the board of trustees of the Marietta, Ohio-based American Sternwheel Association at age 16, and last year its 348 members welcomed him as their new president. 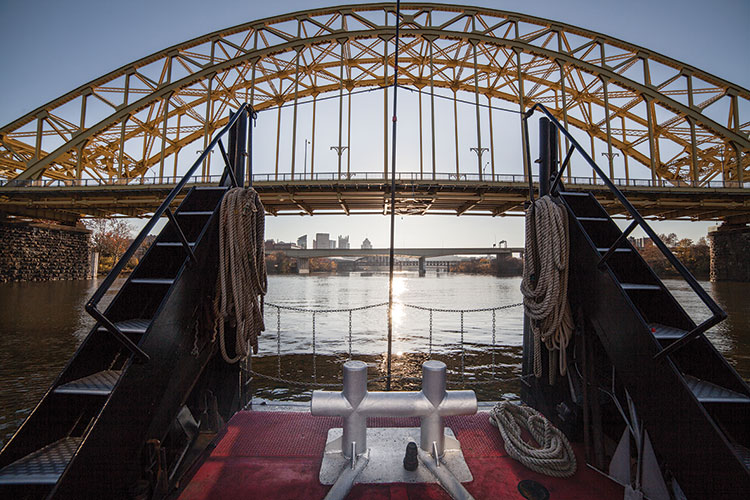 In September, for the first time, when the Katie H headed down the Ohio for the association’s annual regatta in Marietta, Hammill was not aboard. The three-day trip each way was deemed too much for his now-frail health. President Meinert made the trip with Nikki Oakes of Baldwin Borough, his girlfriend, deckhand — and perhaps as important for a long trip on the water — cook. “Her mom’s full-blown Italian,” he says. “She can make all kinds of stuff.” 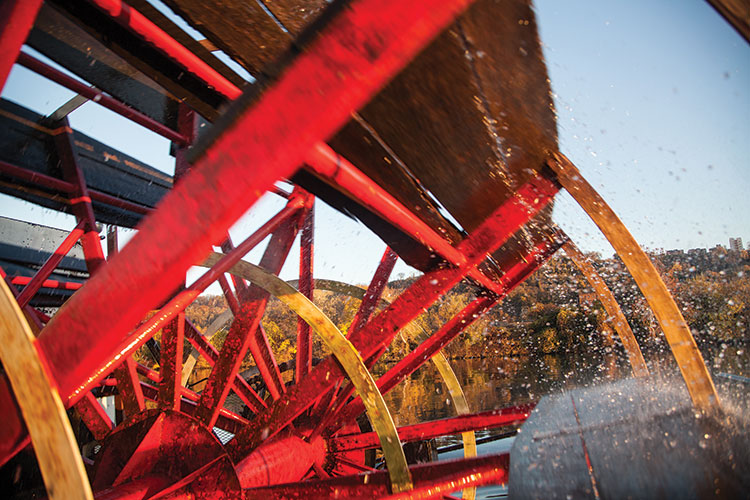 Recently the full crew of the Katie H invited a couple of visitors to join them on a typical Sunday cruise. When Hammill fires the motor, a cloud of diesel smoke drifts out of the engine-room door. He climbs the stairs to the pilot house, while Meinert strains to push the 80-ton boat away from its moorings and Ferber and Oakes gather in the lines. Once they drift a safe distance from the dock, Hammill grips the controls, which are mounted on a salvaged banjo axle from a Model T and hand-painted “FRO-NUT-BACK.” The boat vibrates as the wheel, 10 feet high and 15 feet wide, engages and begins to spin. Soon the Katie H is cruising for the Point at a leisurely 7 mph.

Fall foliage glimmers from the banks, and soon the city skyscrapers heave into view. A roar crosses the water from Heinz Field as the Pittsburgh Steelers score a touchdown. The Katie H joins in with a sonorous salute from the air horn. Scowling at a Gateway Clipper Fleet boat ferrying spectators to the stadium, Meinert derides the fleet’s “fake” paddlewheels. To an enthusiast like him, such vessels are the textbook definition of showboating because they’re really powered by a propeller. 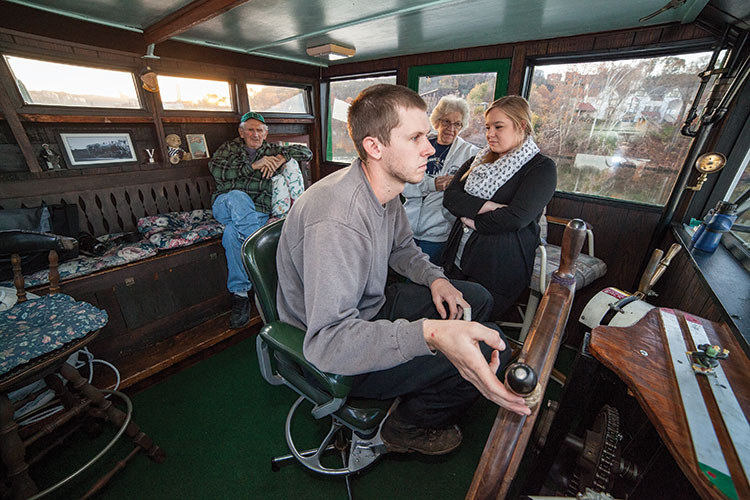 Hammill eventually cedes the controls to Meinert and retires to a 100-year-old bench he retrieved from another old steamboat. From there, he settles into his role as the old silt, telling tales of memorable dives and adventures. He still keeps two bottles of unopened German wine he liberated from the wreck of the Pilot House restaurant, a once-popular establishment that was moored to the Mon Wharf until it sprang a leak. Another time he piloted the Katie H in a cameo appearance in the 1984 film “Mrs. Soffel.” 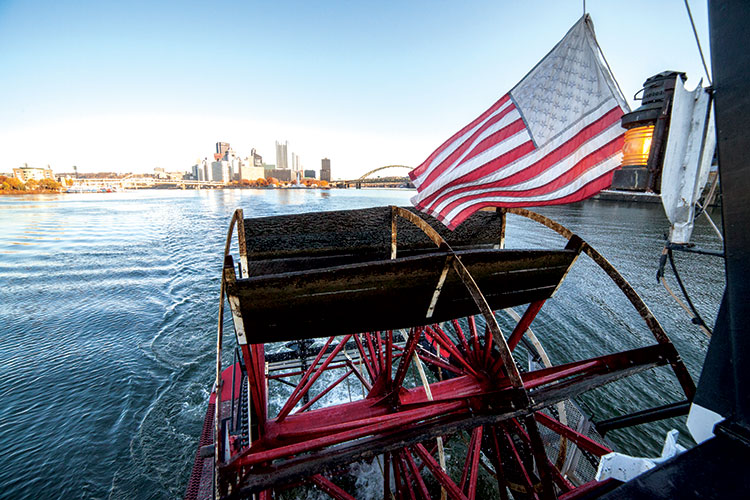 He wonders aloud where his old brass diving helmet has gotten to. The little windows were pretty useless in the murky river, he says. “You can’t see anything. You have to feel your way around.”

“That’s why it’s great to go with a diver,” Ferber teases. “Because all they can do is feel their way around in the dark.”

Oakes winces and excuses herself. “I’m going to go get those lines ready.” 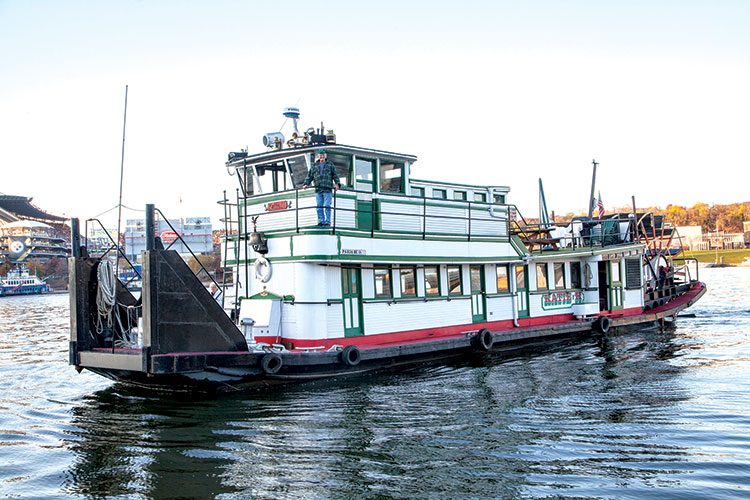 Vince Hammill’s sternwheeler, the Katie H, is named for Hammill’s mother — “a little midget, but tough,” he says.

What the future holds for the Katie H is a topic they don’t often discuss. Hammill doesn’t like talking about it, though Ferber says they sometimes worry about the expense. The boat isn’t cheap to maintain. It needs to be painted each year. There’s the cost of leasing the dock and adjoining land from Millvale. The 2,000-gallon fuel tank has to be topped off with several hundred gallons each year, a substantial chunk out of the budget for what, when all is said and done, is pleasure cruising.

But Meinert has set his course. “I want to keep the legacy going on,” he says. “I love it.”

Mark Houser is the director of news and information at Robert Morris University and a frequent contributor to Pittsburgh Magazine. Recent stories include the revitalization of Downtown and profiles of historic brands Heinz and Westinghouse in last month’s “Made in Pittsburgh” feature. 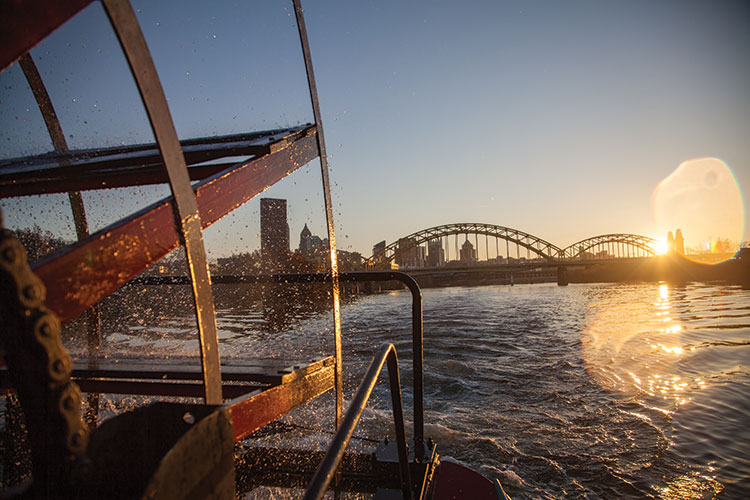 This article appears in the November 2016 issue of Pittsburgh Magazine.
Categories: Community Feature, From the Magazine, Hot Reads