Taking Flight at the Carnegie Museum of Natural History

You don’t need to travel back in time to experience prehistoric flight. Just visit the new Pterosaur exhibit at the Carnegie Museum of Natural History, in Pittsburgh for a limited time. 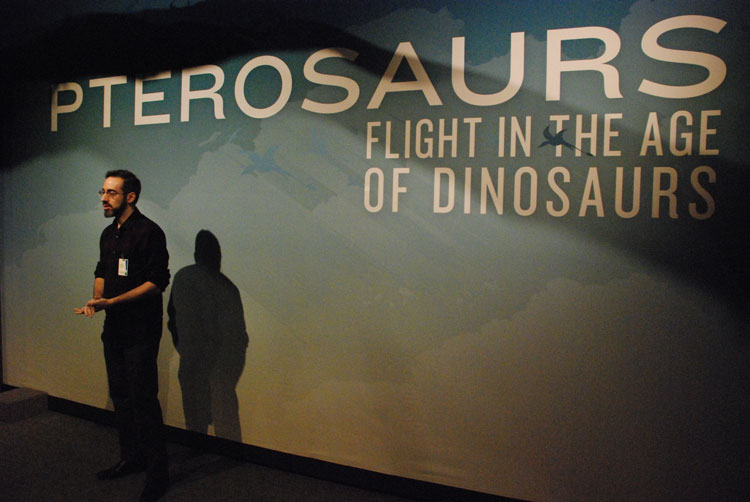 When you enter the newest exhibit at the Carnegie Museum of Natural History, make sure to keep looking up. “Flight in the Age of Dinosaurs,” features life-size models of pterosaurs towering over the exhibit’s many fossils and interactive exhibits.

Although pterosaurs lived among dinosaurs, they were not dinosaurs themselves, according to Dr. Michael Habib, a pterosaur expert. Their closest living relatives are crocodiles and birds, but they were a species all their own.

This exhibit — the largest pterosaur exhibit in the United States —  is on loan from the American Museum of Natural History; it will remain in Oakland until May before moving on to Los Angeles. Make the most of your visit with our insider highlights! 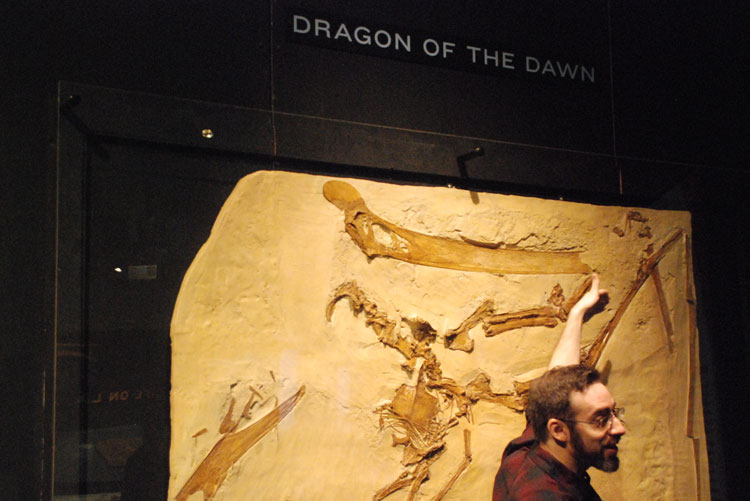 Highlight #1: Only in Pittsburgh

The Carnegie Museum of History boasts the best collection of pterosaur fossils outside of Europe, according to museum curators.

One of the most famous pterosaur fossils is on display in the middle of this exhibit: rhamphor hynchus, or “Dark Wing”. This original specimen is the most well-preserved in the world, and this is the first and only time it has ever left Europe.

Because pterosaur fossils have a tendency to be torn apart or crushed rather than preserved, this 3-D fossil is a rare and historic feature of this exhibit. Even today, scientists are still learning from Dark Wing.

As you make your way around the exhibit, you will see castes of fossils as well as originals, but they are all meant to understand the anatomy and physiology of these giants. 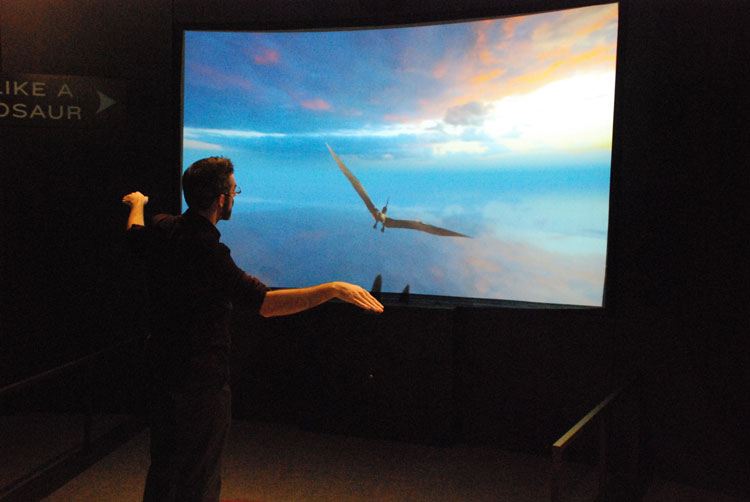 Looking to experience what prehistoric, reptilian flight felt like for yourself? Head to the Flight Lab.

Visitors to the Flight Lab stand below a life-size model of the largest pterosaur in the exhibit: quetzalcoatlus (try saying that three times fast.). Named for an Aztec God, it is the largest flying animal known to science at 30 feet long and 30 feet wide. It towers over visitors as they experience the Forces of Flight and Fly like a Pterosaur exhibits.

In the Forces of Flight simulator, visitors use hand movements in a virtual wind tunnel to control a pterosaur’s wings. The slightest twitch of a finger will send the pterosaur crashing into the ocean or soaring into the air.

In Fly Like a Pterosaur, visitors come even closer to experiencing prehistoric flight. This full-body interactive software asks participants to flap their arms up and down to pilot the pterosaur on the screen. Custom built, this exhibit is a first for interactive software. According to Dr. Michael Habib, a pterosaur expert and one of the designers of this exhibit, no other program has nearly as much detail and sensitivity to movement. 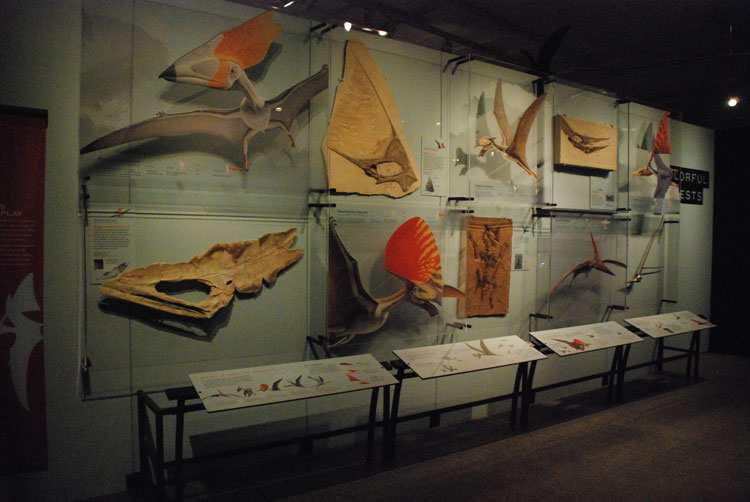 As you move past the Flight Lab, you’ll find a wall of pterosaur heads, featuring their colorful and towering crests. The reasoning for these crests is hotly debated among scientists — after looking at all the evidence in this exhibit, maybe you’ll be able to come to your own conclusions.

Dr. Michael Habib, who has studied pterosaurs extensively, notes their remarkable variability as a species. They ranged from small, insect eating reptiles to gargantuan ocean predators. While some had crests, others did not. By visiting this exhibit, you will see for yourself the amount of colors, sizes and features that make the pterosaur species truly unique. 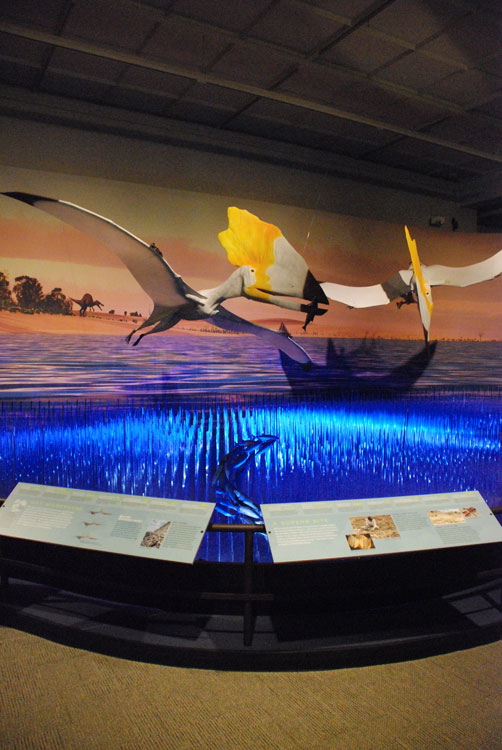 Rounding the corner, you’ll find, in our opinion, the most beautiful part of the exhibit. Two life-size pterosaurs soar over an ocean constructed of blue light and glass. For a moment, you will feel transported back to a time when dinosaurs roamed and pterosaurs soared above the ocean waves.

Pterosaurs may be long extinct, but their influence remains. Don’t miss this one-of-a-kind exhibit, and remember to watch the skies when you visit. 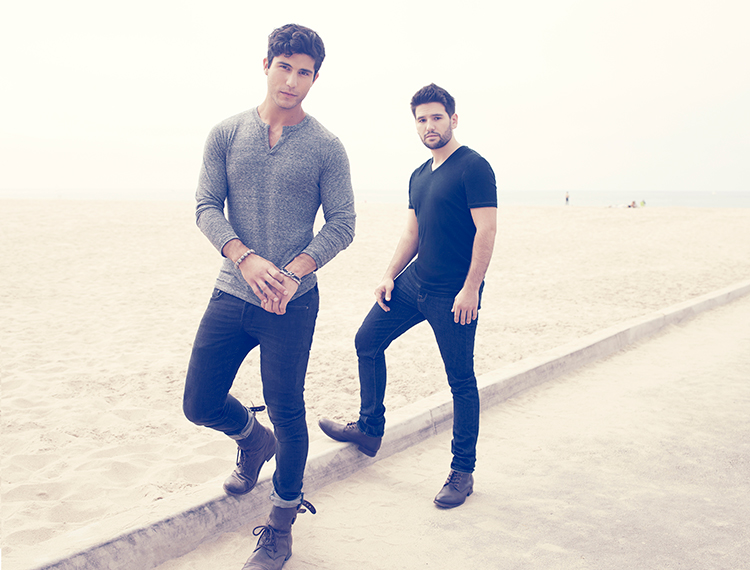 When we interviewed Dan Smyers of the country duo, Dan + Shay, he told us the most surreal moment of his career so far has been the awards nominations. That was about a year ago, when his duo had three nominations under their belt.

Since then, they’ve gotten more attention, including a 2016 Academy of Country Music Awards nomination for Best Vocal Duo of the Year.

Smyers grew up in Wexford and graduated from Carnegie Mellon with degree in finance.

“It’s kind of hard in the middle of Pennsylvania to find a niche in country music,” he told us in February 2015. “I had been writing country music for a long time, but I just didn’t show it to a lot of people. When I decided to move to Nashville [a few years ago], I thought I would be able to put all of my influences in a pot and kind of stir them up and create a unique sound.”

After moving to Nashville and meeting Shay Mooney from Arkansas, the duo started performing together and eventually made a name of themselves with the success of their debut single, “19 You + Me.” They were the first rookie duo to top the Billboard country music charts.

They’ve maintained an air of mystery in the past few months: Their Facebook and Twitter pages show pictures of them working in a studio with the caption “Be back soon.” So as fans eagerly await their next album, we’ll be cheering on this Pittsburgh native.