Bricolage Production Co. is currently presenting its fourth season of Midnight Radio, which wraps this month with “Cult Movie Classics.” 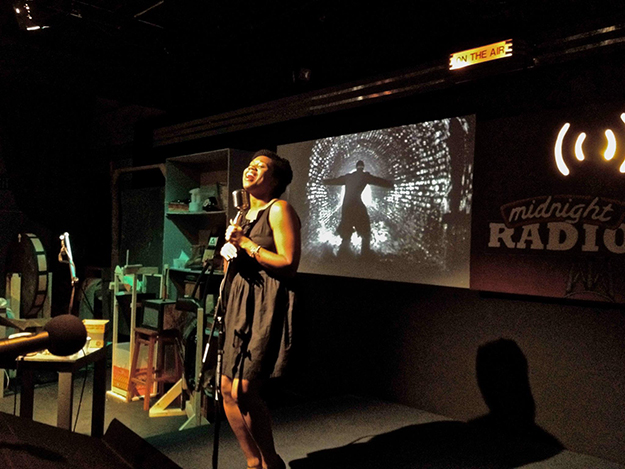 In 2001, Jeffrey Carpenter stumbled upon The Savage Mind, a book by Claude-Lévi Strauss. The volume belonged to his roommate, but Carpenter flipped through it and came across a bold new word: bricolage. The word is defined as “construction or creation from a diverse range of available things.”

A decade later, Bricolage Production Co. is a successful troupe, nestled in downtown Pittsburgh and admired throughout the city. But Carpenter and his wife, Tami Dixon, have stayed true to the company’s chosen namesake. Bricolage “makes artful use of what’s at hand,” according to their erstwhile motto. Actors of all stripes flock to them. Playwrights famous and obscure receive productions on their simple black-box stage. Bricolage is like a melting pot of artists, except that these people don’t melt — they merge.

“We have artistic ADD,” says Carpenter, who founded the company in 2001 and mounted his first production the next year.

“We would get bored doing the same thing over and over,” says Dixon.

During conversation, the two South Siders talk toward and over each other, tossing out thoughts and finishing each other’s sentences. Their dialogue matches their longtime collaboration, as artists and partners. Carpenter, who’s the company’s artistic director, started Bricolage as a gypsy caravan, designed to migrate from one space to another. He and Dixon met in New York City in 2003, and she decided to move to Pittsburgh. When youth company Prime Stage Theatre moved out of its storefront space, Bricolage moved in and has remained grounded in the Cultural District ever since.

“We knew we were the redheaded stepchild of the Cultural Trust,” Carpenter confesses with a characteristic chuckle, “but they have been very supportive of us. It was very serendipitous.” 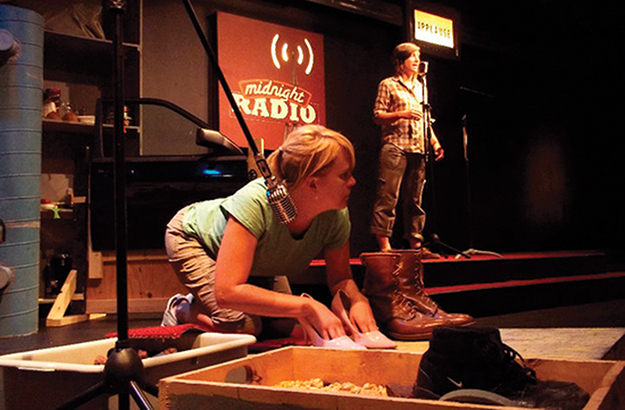 Throughout the past decade, Bricolage has mounted traditional dramas, irreverent farces, every kind of staged reading and even an original musical about a man-eating shark. The company has produced the “Smackdown” series, whereby playwrights compete for audience votes. Its annual fundraiser, “B.U.S.,” is a 24-hour play festival that sells out easily. Last August, Bricolage created its magnum opus, STRATA, a fully interactive performance piece partly modeled on New Age cults.

But its most popular series is Midnight Radio, an ongoing series of faux radio programs written by local dramatists and recorded before a live audience. The show behaves like an old-time radio program, with jingles, upbeat “commercials,” a blinking applause sign and active audience participation. Each “episode” is sprinkled with trivia and puzzles. Most performances are based on original scripts, but some —like Orson Welles’ War of the Worlds — are actual audio plays from the Golden Age of radio. And as proof of their limitless creativity, Carpenter recalls last October’s episode, “Pittsburgh Ghost Stories”; in preparation, he went so far as to spend evenings with an actual ghost-hunter.

“We don’t want a passive audience,” Dixon asserts. “And the audience has really changed. A few years ago, we knew every single person in the audience. Now, we don’t even know two-thirds. We would honestly love to become the next “Prairie Home Companion.”

Bricolage completes its most groundbreaking season with a final radio show, this one centered around cult-movie classics. They plan to screen two B-movies, Godzilla vs. Mothra and The 36th Chamber of Shaolin, as live actors perform a “revised” script in the foreground. Local humorists Gayle Pazerski, Brad Stephenson and Joe Lyons will write the script, in
accordance with the Bricolage mission.

“Going back to Midnight Radio,” Carpenter says proudly, “is like putting on an old baseball glove. It feels so good.”

“Traditionalists wouldn’t call this theater,” Dixon says. “Because it’s … ,” she pauses to think of the right word, “… fun.”