Straight from the pod, fresh English peas are an early summer treat worth savoring.

Eating freshly picked English peas, quickly blanched and topped with a knob of salted butter, is the ultimate summer pleasure, a mealtime luxury that’s well worth the effort that goes into shelling. Somehow the time required to transform a heap of fibrous pods into a tiny, gemlike pile of plump green peas makes this summer veggie (also called garden or shelling peas) all the more precious.

If you can, shop for fresh peas at local farm stands or farmers’ markets—our local season lasts from mid-June through mid-July. Most true pea lovers, of course, grow the climbing vine in their gardens: Peas that make the shortest possible journey from field to table always taste the best. After harvest, peas convert their sugars to starches incredibly quickly.

Frozen peas are popular simply because they taste sweeter than fresh peas that are even just a few days old. Perhaps this quick passage from delicious to dull-tasting explains why eating fresh peas is a relatively recent development in culinary history. That’s because for millennia, the vegetable’s primary role was as a dried legume—both portable and filling.

Relics from a Bronze Age settlement in Switzerland prove that peas were part of our eating habits as far back as 3000 B.C. For the ancient Greeks and Romans, as well as for European peasants throughout the Middle Ages, the dried pea was cheap and essential protein. As with so many other great culinary developments, we have the Italians to thank for popularizing the pea as a fresh food: During the Renaissance, they developed piselli novelli, a new variety of shelling peas that tasted especially good fresh.

As eating fresh peas in this manner caught on throughout Europe, they even became fashionable: In France, it became the rage among ladies in the court of King Louis XIV to indulge in fresh peas before going to bed. This trend didn’t last, of course, but the idea isn’t half-bad considering the nutritional benefits: One-half cup of peas has more than 4 grams of protein and is a good source of vitamins A, K and C, as well as fiber.

Peas bred for eating pod and all—such as snap peas—only emerged in the 17th century when growers in Holland and England began to develop new varieties.

Today, we can enjoy good-quality sugar snaps or Chinese snow peas for most of the year, but the English pea remains an elusive treat because of its extreme seasonality—all the more reason to get out and shop for them before our all-too-brief pea season ends in western Pennsylvania.

Today only 5 percent of all peas grown are sold fresh; more than half are canned, and most of the rest are frozen. 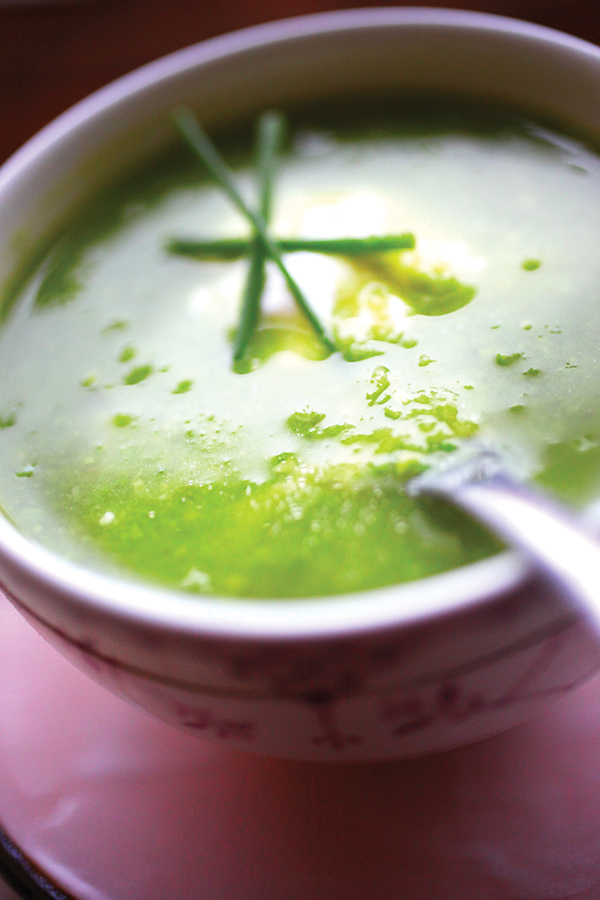 Serves 3-4
This quick and easy recipe is from an old standby on my bookshelf, The San Francisco Chronicle Cookbook. The soup’s beautiful green color and fresh flavor capture the essence of spring garden peas.

Shell 2 pounds of English peas to make about 2 cups of shelled peas, reserving the pods for later use. Bring 3 cups of chicken or vegetable broth to a boil in a medium-sized saucepan. Add the pea pods and 1/2 cup of water, cover, reduce heat to medium-low and simmer for 15 to 20 minutes. Strain, discarding pods.

Return the broth to the saucepan and add the peas. Bring to a boil, cover, reduce heat to medium-low and simmer until the peas are tender. This will take anywhere from 15 to 40 minutes, depending on the size and maturity of the peas.

When tender, put the peas and broth into a food processor or blender and puree. Return to the saucepan, add 1/2 teaspoon salt, 1/2 teaspoon freshly ground black pepper and heat to just below boiling. Ladle into soup bowls and garnish with crème fraîche (you can substitute plain yogurt or sour cream thinned with milk) and a sprinkling of fresh chives.

We eat the green seeds of legumes such as lima beans, fava beans and soybeans, but we eat the pods of only a few: the common bean, long bean and pea.

Favorite of a Founding Father

President Thomas Jefferson was by all accounts a rather serious man, but his favorite vegetable—the English pea—brought out a sillier side of him. According to family accounts, Jefferson competed every spring with local gentlemen gardeners near his estate in Charlottesville, Va., to see who would bring the first pea to the table. The winner then hosted a community dinner that included a feast centered on the winning dish of peas.

Among the 19 pea varieties Jefferson documented sowing were Early Frame, planted annually from 1809 until 1824; Hotspur, named for its quick, frantic growth; Marrowfat, a starchier and later variety; and Blue Prussian.

You can even replicate Jefferson’s plants in your own garden: Seeds for the Prince Albert variety, indistinguishable from Early Frame and introduced into America in the 1840s, are available from the Monticello seed catalog (monticellocatalog.org). 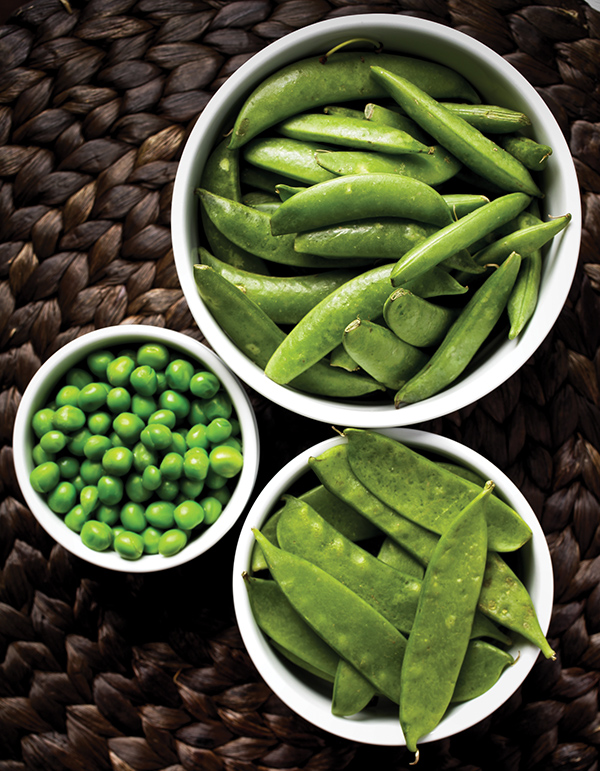 Mind Your Peas and Q’s

Seek out English peas at local farm stands or farmers markets while the short local season lasts, usually through mid-July. Peas’ sugars quickly convert to starch, particularly when exposed to heat, so keep them cool on the journey home and plan to eat them the same day you buy them.

While English peas must be shelled, other types, including snow peas or sugar snap peas, can be eaten pod and all; these varieties retain sweetness well and are available throughout the year, although the peak season just lasts through summer.

English Peas
Also known as the common garden pea, this pea must be shelled from its tough, fibrous pod. When young and small, these peas are so tender they usually don’t need any cooking at all; use them fresh in salads. They are also delicious in delicate fresh-pea soup (see previous page), or they can be additions to many pasta or risotto recipes.

Fresh, tender pea shoots, stems and leaves are delicious when quickly stir-fried, and they’re an especially popular dish in Asia. Buy peas that look shiny and firm; at their freshest, the pods will squeak when rubbed together. Look for pods that are well-filled but not swollen or crowded; you want small- to medium-sized peas versus large pods with heavy peas, which can be tough and starchy. Lightweight pods will generally house immature, flavorless peas and should be avoided.

Snow Peas
Also called the Chinese snow pea, this flat green pea has tiny, barely developed peas inside. The variety was developed in China sometime soon after the vegetable was brought there by travelers, perhaps as far back as the seventh century.

Sweet and crisp-tender, the snow pea is commonly consumed whole, and the overall flavor is sweeter than that of English peas. Snow peas are common in Chinese dishes but also make a great addition to salads. Avoid snow peas that are yellowed, tough or stringy, which means they were left on the vine too long.

Sugar Snap Peas
This cross between a snow pea and an English pea is crunchy, sweet and succulent, and it’s usually eaten in its entirety, often raw. The sweet peas inside are round and plump but smaller than English peas.

To prepare sugar snap peas for eating, simply snap off each end, pulling down the side of the pod to remove the strings. If they are overly mature and the pods are too thick or fibrous to have appeal, shell them as you would English peas. While very familiar to cooks today, sugar snap peas are a recent arrival in the produce section; they didn’t become readily available until the 1970s.

Look for a shiny exterior on sugar snap peas—dull coloration can indicate peas that are overripe and will have that same starchy quality as overripe English peas.