To show his appreciation, Zlatan Ibrahimovic posted a picture of his knee “autographed” by UPMC’s Dr. Freddie Fu.

Fixed, done and stronger. Once again thank you for the support. We will enjoy my game togheter soon

When Swedish soccer star Zlatan Ibrahimovic, a forward for Manchester United, hobbled off the field a few weeks ago with a torn anterior cruciate ligament in his right knee, early reports indicated his career might be over.

Ibrahimovic is viewed as the Sidney Crosby of European soccer, and his legions of fans feared the worst.

Those fears were allayed on Tuesday, however, when Ibrahimovic announced via Instagram that his knee is “Fixed, done and stronger,” with a photo of his surgically repaired knee marked with the Chinese symbol for Fu.

Fu — as in Dr. Freddie Fu, the UPMC surgeon who performed the operation.

Fu has every right to be proud of his work, but the autograph is more about safety than pride. Doctors customarily put an identifying mark on their patients to make sure they are working on the correct patient and on the appropriate limb. 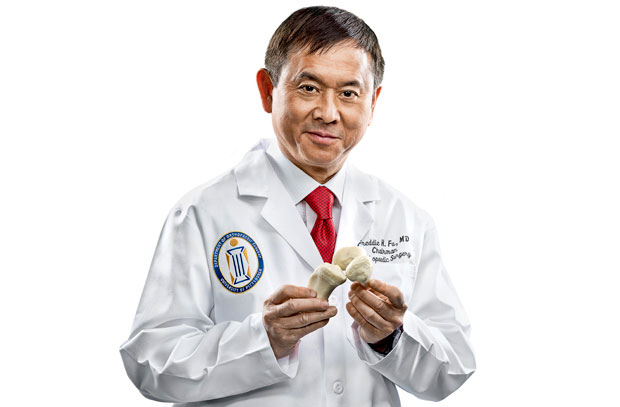 Fu, who was born and raised in Hong Kong and is professor and chair of Orthopaedic Surgery at the University of Pittsburgh Schools of  Health Sciences, is considered to be an international expert on knee reconstructions. The team sought him out because of his 30-plus years of experience in pioneering surgical techniques, according to the South China Morning Post.

Ibrahimovic, at age 35, is considered to be young enough to continue playing and competing; his agent predicts he will return to the soccer field, although not until next season.