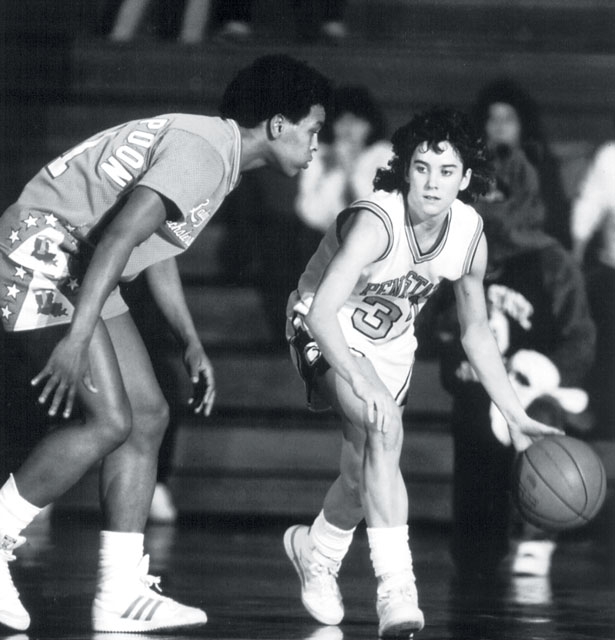 Basketball résumés don’t come any more distinguished or extensive than the one with Suzie McConnell-Serio’s name at the top of the page. The former Seton-LaSalle High School star has excelled as a player and a coach everywhere she’s ever been. At Penn State University in the mid-1980s, the gifted point guard led the Nittany Lions to four straight NCAA Tournament appearances and twice led the nation in assists. She later played three seasons in the WNBA.

McConnell-Serio has also enjoyed considerable success as a coach, first in the high school ranks and also in the WNBA. Her record in 13 seasons at Pittsburgh’s Oakland Catholic was 321-86, and she guided the Minnesota Lynx to back-to-back WNBA playoff appearances in 2003 and 2004. Recently, the Pittsburgh Post-Gazette conducted voting to determine the city’s “Best Athlete Ever” in conjunction with Pittsburgh’s 250th-birthday celebration, and McConnell-Serio was right there on the ballot with the likes of Mario Lemieux, Roberto Clemente and Arnold Palmer.

McConnell-Serio, 41, was born and raised in Brookline and now resides in Upper St. Clair with her husband, Pete, and the couple’s four children. She just completed her first season as head coach at Duquesne University.

What was it about coaching high school basketball that you enjoyed so much?
You’re dealing with athletes at an impressionable age. They’re motivated. They work hard. They want to be good. They have goals. They have expectations. And they live in the gym. They want to get better, and they see what the future has to offer as far as playing in college and things like that. It’s a fun level.

What was the source of the love of basketball you have, and how early do you remember having it?
We had a hoop in our backyard when I was a little girl, and I’m one of eight children, so I remember being with my brothers and sisters shooting around a lot and playing a lot of games. I think it was the only hoop in the neighborhood, so a lot of the neighborhood kids would always be there too. I just remember having a love for the game that continued to grow as I got older. The more success you experience doing something, the greater your passion becomes. When I would experience success on the court, it made me want to spend even more time playing.

You’re scheduled to be inducted into the Women’s Basketball Hall of Fame in June. What do you expect that day to be like?
Probably emotional for me (laughing). It’s an unbelievable honor when you think about all the people who have coached the game and all the people who have played the game, and there are only a handful of inductees each year. I mean I was overwhelmed when I received the call from [University of Tennessee coach] Pat Summitt telling me that I was going to be inducted. It will be a special day for sure to be able to share that with my family.

I know you could probably talk about this for days, but how challenging is it to combine coaching basketball with motherhood?
It presents its challenges obviously, the time constraints of both (laughing). When I was coaching high school, it was never a full-time job, so I was home during the day when my kids were young. And then in the WNBA, I coached in the summertime and they were off school. Now the collegiate level is probably taking me away the most. They’re at school all day, and I’m at work, and then I’m at practice and I travel to games. So I’m missing some of their things now. But my husband, [Pete], has been wonderful. He’s a tremendous father, and thankfully very supportive of what I do. That allows me to have the best of both worlds.

With the many wonderful moments that you’ve been involved in as a player and a coach, do you have one or two that are the most memorable?
As a player, you think of winning an Olympic gold medal as being the highlight of your career, just because that’s the best of the best. You’re representing your country and competing against the best players in the world. So it’s just an unbelievable experience to win a gold medal in the Olympics. As a coach, I think it’s just seeing the faces of my players when we’ve won state championships or WPIAL championships. Seeing your players succeed like that, those are definitely the most rewarding moments for me as a coach.

Full Name: Suzanne Theresa McConnell-Serio
Date of Birth: July 29, 1966
Position: Point guard
Years at Penn State: 1984-’85 through 1987-’88
Career Highlights: Named Penn State’s first-ever First Team All-American in 1988; helped the United States capture a gold medal at the 1988 Olympics in Seoul and a bronze medal at the 1992 Olympics in Barcelona; was a First Team All-Women’s National Basketball Association selection with the Cleveland Rockers in 1998; won four WPIAL championships and three state titles in 13 seasons as the coach of Pittsburgh’s Oakland Catholic High School; named WNBA Coach of the Year in 2004 with the Minnesota Lynx.