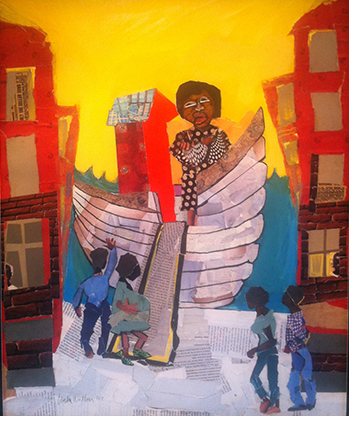 Rebecca has issues. She’s a single mother with four children (in their teens and early 20s) cloistered in a small apartment, and her oldest son has served time. All around her, Rebecca sees crime and drugs, poverty and violence. Somehow, she must guide her family through a deluge of despair. Her methods are unconventional, even bizarre. But she pulls through, day by day.

“I wanted to write a play that had comedy,” says Mark Clayton Southers, who penned Ma Noah in 2004. “But I wanted it to have situations that were real. It’s tough to be a single mother.”

Southers is the founder and artistic director of Pittsburgh Playwrights Theatre Co. and has produced scores of plays. But this year is special: Playwrights is celebrating its 10th anniversary with a season dedicated to strong African-American women. Southers has written scripts before — but Ma Noah seems particularly personal to him, for he has lived most of his life in the Hill District and has worked for a decade to integrate white and African-American talents. His concern for underprivileged people is powerful. It’s no wonder, given his passion for the subject, that Ma Noah won the Theodore Ward Prize from Columbia College, Chicago.

But Southers is a curious personality: He’s charismatic, good-humored and remarkably relaxed in conversation. Outwardly, Southers is a mediator with a Taoist calm. He loves to experiment with new projects and media, and has worked with Kuntu Theatre, the August Wilson Center for African American Culture, Bricolage Production Co. and innumerable others. Southers recently directed his first opera in Newark, N.J. And if he kept a Rolodex, it would be too packed to turn. Everywhere Southers goes in Pittsburgh theater, people recognize him. Among certain friends, he is known as the “Grand Poobah.”

Inside, however, Southers is a stormy soul. He occupies many different worlds, and the rapid switches make him uneasy. He has held Pittsburgh jobs as a photographer and even a steel-mill worker, but he also studied in Alabama and worked for short periods in both Detroit and the Virgin Islands. Southers, a father of three, proudly owns a house in what some may consider one of Pittsburgh’s most conflicted neighborhoods. He’s pretty wrapped up in plays, having produced, acted in, written and directed them. Southers has concern for “the common man,” he says — and he wants to avoid the screwball antics of Tyler Perry — but he doesn’t want to copy August Wilson (a close friend and past collaborator). As someone who’s known to treat others with respect, Southers remains conscious of race and politics. In all, he treads complicated waters, and Ma Noah reflects that tumult.

“The play is about change,” says Tracey Turner, who will direct Ma Noah. “No relationships in this play stay the same.”

“I’ve been detached from my plays,” Southers says. “A lot of playwrights treat their plays like their babies. But I can be detached. I think Tracey knows more about this show than I do.”

Southers and Turner have been friends for 30 years — so long that they can’t agree on how they originally met. The two share “a hunger” for artistic expression. (“I never ask myself why,” says Turner, of her decades in theater. “It’s a calling, and it’s a way of life.”) Southers forges these kinds of relationships — long, strong and personal. Ever since he took over the Penn Avenue Theater in 2003 and renamed it Pittsburgh Playwrights, Southers has striven to cross-pollinate Pittsburgh’s theatrical talent. For a full decade, he has introduced white and African-American actors, directors, writers, and technical crews. Hundreds of people met for the first time under Playwrights’ roof.

Today, the company occupies its third space, a well-equipped, second-floor black box on Liberty Avenue, just above Bricolage. Playwrights has never been glamorous — but it has become a powerful institution, gestating many new geniuses. But Southers also credits the Pittsburgh Cultural Trust as “instrumental in [their] growth in the Cultural District” and mentions how the PCT helped find the company’s new home.

Now, after years of incremental success, Southers gets to revisit one of his early works — the script that help set his career afloat.

Ma Noah bears a biblical title, but the story takes place firmly in the present: Rebecca is a single mother whose first husband died and second went to prison. Her children each struggle with a different societal problem — “Pig” used to do drugs, and is now dealing — taking his younger brother, Larry, along for the ride.  Mary is pregnant but doesn’t reveal who the father is. And then there’s Francine, who works in the fast-food industry and secretly moonlights as an exotic dancer. What’s a mother to do?

In many ways, Rebecca’s an old-fashioned, no-nonsense matriarch who does everything she can to keep her family in line. But she’s also quick-witted and unconventional — and she’s not above off-color humor. She is forced to think on her feet — because if she fails to stay strong, her children could descend into a cesspool of drugs, incarceration and violence. Events unfold in Rebecca’s tiny apartment, the space all her children share.

On its surface, Ma Noah breaks stereotypes left and right, but it’s also an elegy for inner-city life. For any mother who has worried about the decisions of her children, Southers’ play explores the nuances of fear and resolve. Noah kept his children afloat for 40 days and 40 nights. Will Rebecca be able to keep them buoyant until they each reach adulthood?