Surprise! Pittsburgh's Soccer Team is Worthy of Your Attention

So what if the Riverhounds aren't a major-league team. If you're not going to their games, you are missing out. 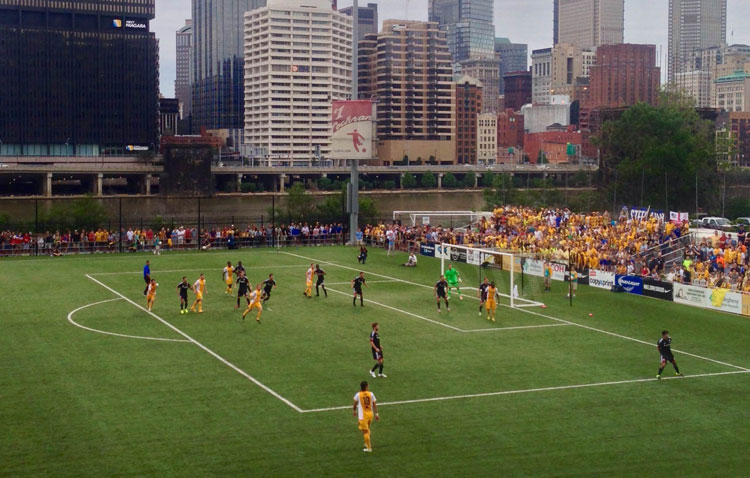 I went to my first Pittsburgh Riverhounds game when I was 8 years old, joining a friend and his family for a match when the team was playing at Bethel Park High School. I don’t know who won. I do remember that my friend’s little brother socked the mascot in the face. We didn’t go to any more games after that.

For years, if you asked me, “Where do the Riverhounds play?” I probably could only give you a response of ¯_(ツ)_/¯. The team spent more than a decade bopping around to different high schools and the Washington Wild Things’ baseball park. So the Riverhounds having their own stadium, a stake in the ground saying: “this is our home,” is its own achievement.

But they did better than just getting a home. Highmark Stadium is in an almost ideal location. It is plopped into Station Square, where there already was a "T" station and foot traffic around the multiple bars and restaurants. The stadium has a gorgeous view of the Fort Pitt Bridge to the west and the Pittsburgh skyline to the east, one that was made to be posted on Instagram.

And post it to Instagram I did, when I went to my first Riverhounds game at Highmark last week.

Now, I fully recognize that I am part of the problem of Pittsburgh soccer being stuck in “small-potatoes” territory for so long. I could only be bothered to show up for the big event: the ‘Hounds facing Major League Soccer opponent D.C. United. People like me are the reason the team drew a sellout crowd of 3,988 fans for the D.C. game but only 1,015 for their USL game against F.C. Montreal just a few days later.

After experiencing Highmark Stadium and the Riverhounds, though, I certainly will be back. Because architects had to squeeze the stadium onto such a small footprint, the stands have a high angle that puts you right on top of the field. The Steel Army supporters section brings a fun vibe with their chants and smoke bombs. And most importantly, the ‘Hounds are a talented team that pushed major league D.C. past 90 minutes, to grateful applause from the fans.

It seems Pittsburghers don’t want to make room in the consciousness for a sports team that is anything less than major league. Minor-league basketball and indoor-football teams cycle through town without much staying power. If I brought a minor-league badminton franchise to Pittsburgh, we’d probably draw 3,000 looky-loos for the first match, but then the curiosity would pass and the Steel City Shuttlecocks would be forced to fold up the nets.

I think that's too bad. There is nothing wrong with being a minor-league team.

We shouldn’t see being a “niche” team as any kind of insult. Yes, the Riverhounds will not be as popular as the Pirates. And really, Highmark Stadium is a victim of how much we love PNC Park. For 15 years, we’ve had a riverfront ballpark to go spend a summer night at a game with a beautiful view of downtown. As terrific as the setting for the soccer stadium is, sports fans in town already have the North Shore. To them, who needs the South Shore?

So the growth of soccer in Pittsburgh will hinge on attracting more of my generation — the 20-somethings. We grew up playing FIFA video games and asking, “What’s your favorite Premier League team?” The Riverhounds are the team we can call our own. And as a side with the second-most goals in the league, it’s an entertaining team, to boot.

But let’s allow that fan base to grow organically. The team will have seasons where they compete for championships, a sure-fire way to get folks on the bandwagon. Then more people will be exposed to enjoying a soccer evening at Station Square and want to come back. “Minor league” need not be a stigma, but instead the mark of a team that has strong, intimate ties to its fans.

Pittsburgh has a soccer team. Even though it’s not major league, so what? That’s no excuse for missing out on a summer night kickin’ it on the banks of the Mon.