Shoefitr, the brainchild of three Carnegie Mellon grads, wants to make sure you never return a pair of shoes again. 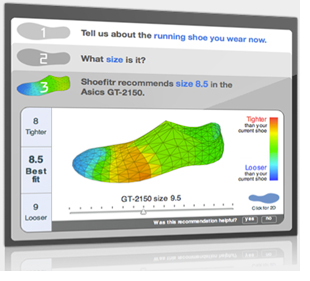 One of every three online shoe orders is returned, due to inconsistent sizing. Fortunately, local startup Shoefitr created a solution: 3-D scanning technology that studies the inside of nearly every brand of kicks. Take the athletic (or lifestyle athletic) shoe you already love and use the app to find the correct fit in another brand. For example, if your Nike Shox have seen better days, give Shoefitr the size and model, and it’ll decide what size you need in those Reeboks you’ve spotted online.

Shoefitr, established in 2009, is the brainchild of Carnegie Mellon University graduates Matt Wilkinson, Nick End and Breck Fresen. After receiving a $25,000 grant from AlphaLab, they moved into an Oakland office in January 2010 and began to utilize the locale’s perks: constant access to college students and the undeniable cost-of-living advantage (a big incentive for the company to stay in Pittsburgh).

When new kicks hit the market, manufacturers send a pair to Shoefitr so that they can take a 3-D scan of the interior. Scans are done on everything from an infant Adidas Adizero to a size 15 Asics 2170. As of March, the app covers more than 15,000 shoes — and Shoefitr is preparing to add women’s footwear to its inventory (think pumps and platforms galore), which will broaden its reach and appeal.

This article appears in the May 2012 issue of Pittsburgh Magazine.
Categories: Community Feature