This Saturday, enjoy a bit of locally-sourced wrasslin' at the KSWA's 'Summertime Bruise' in Lawrenceville. 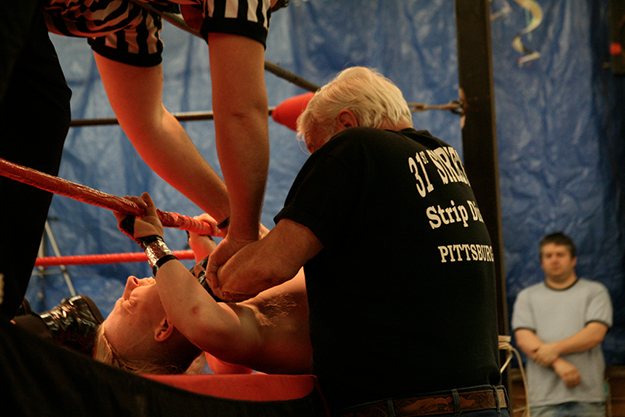 I like to say that I’m a closet fan of pro wrestling, but that’s a lie. Claiming that you’re a closet fan implies that you hide or disavow your appreciation for something; housing a small army of vintage WWF action figures on my office windowsill doesn’t exactly count as hiding. Like many fans of that most peculiar artform, I’ve been following on and off since I was about 8 years old; despite long stretches of disinterest, I can never fully tear myself away from the squared circle.

Do I know why? Of course not. No one does.

For years, I’d travel across several decently sized states to see up-and-coming stars ply their trade in armories, bingo halls and college gyms on the independent circuit. These trips introduced me to grapplers that have since become world champions in the big leagues and allowed me to shake hands with others I’d been watching for decades. Immediately, I was fascinated by the peculiar charm of seeing talented-yet-unknown performers climb into the ring — not from a distant section of the Mellon Arena, but from a folding chair twenty feet away, and always in an unlikely venue.

And there may be no more unlikely venue than the Lawrenceville Moose.

For years now, the lodge on 51st Street has been home to the Keystone State Wrestling Association (KSWA), the most local of local federations. The fighters of the KSWA, truth be told, are probably never going to end up wrestling in a WWE ring; some may never wrestle outside of the Moose. These are regular 'Burghers who transform, once a month, into cold-blooded brawlers for a rabid crowd.

A diverse crowd, at that — this is Lawrenceville, after all. Whole families from the neighborhood pile in, wearing t-shirts bearing the names of their favorite locals. A herd of old Moose are stationed at the bar, commenting on the action and swapping stories about the studio wrestling days. Hipsters wander in from neighboring bars and order a Pabst. And the KSWA knows how to keep them entertained: supply an easy-to-follow story in every match, like it’s still the old days. No one needs to hit a springboard dragonrana or throw an opponent through a stack of tables, here; have a dastardly manager subtly trip a hero as he runs the ropes, and the crowd will fly into a righteous frenzy.

The elder statesman at KSWA is Lord Zoltan, an intimidating presence with a barrel chest and heavy face paint masking his age. He’s currently one-half of the KSWA Tag Team Champions; along with younger counterpart Justin Sane, the two dance to the ring amid a crowd of frantic youngsters. Zoltan began his career as a photographer snapping shots of Bruno Sammartino and Dominic DeNucci at the Civic Arena in the early 1970s; later that decade, he ran one of Pittsburgh’s first indy federations while learning the ropes himself. In the 1980s, he’d show up as “enhancement talent” (the wrestling equivalent of a day player) for the then-WWF, tangling with the likes of Andre the Giant and the Iron Sheik. He hooked up with the KSWA after returning to his hometown; he’s also responsible for the annual “Deaf WrestleFest” fundraisers held for the Western PA School for the Deaf in Edgewood.

At this Saturday’s event, “Summertime Bruise,” Zoltan will tangle with the devious “Nasty” Nick Crane, who gave Zoltan a pounding after a victory at last month’s event. Fan favorite Ric Rumskey will challenge hated champ “Dr. Devastation” Lou Martin for the KSWA Title, and an eight-man elimination match between some of the group’s more colorful grapplers will serve as the main event.

Will the matches look much like Ricky Steamboat vs. Ric Flair? Nope. Will visitors who’ve never seen a match before become diehard rasslin’ fans ordering C.M. Punk t-shirts on the internet after one night in Lawrenceville? Probably not. But will you have a great time? Oh yeah. Grab a cold beer, order some nachos at the snack stand and watch some weekend warriors put on a show. It’s a unique and underappreciated bit of Americana, and a great way to spend a Saturday night.