Stop Using Uber and Lyft, Renting a Bike is Better

You'll save money and have an easier time hopping between neighborhoods on a Healthy Ride bicycle. 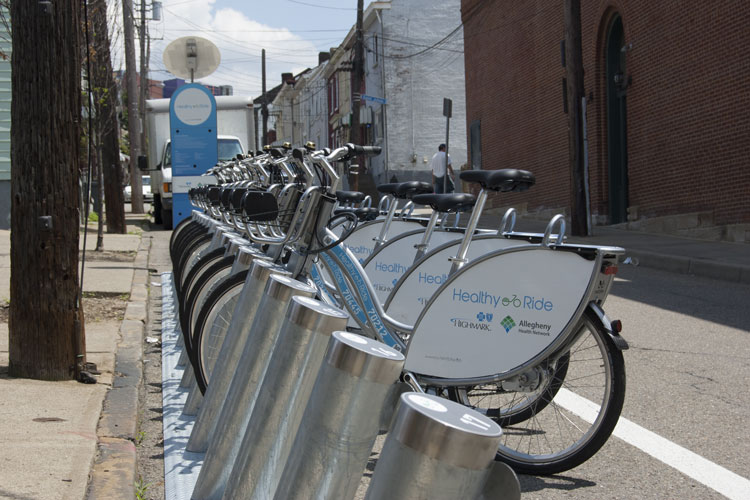 I mean, we’re using them okay. Mostly, I see people checking the pay-by-the-minute bicycles out to tool around this area or that with family and friends, mostly on trails. And that’s a lovely thing to do; I’ve taken a half-dozen trail rides on them, and I’ve enjoyed every trip.

I have, however, discovered the best use of the somewhat bulky cycles. I found myself in Lawrenceville on a Friday night, needing to get back Downtown. I considered calling a Lyft, which would’ve been pricey at that hour. (Plus the waiting. And the awkward conversation with the drivers. Listen drivers, I appreciate that you’re friendly, but if I'm looking at my phone, that means I don’t wanna get to know you at the moment.)

So I thought about it a minute longer, glanced to my left and noticed a rack of bicycles.

If you’re in one neighborhood but part of your night will take you to another — Downtown to Lawrenceville, North Shore to South Side, East Liberty to Oakland — you can often get there in the same amount of time it’d take you to summon an Uber by checking out a bike. You also won’t have to park on multiple occasions in the same night, an eternal suck of time and money.

Played right, this also eliminates the need to plan your whole evening based on what neighborhood will host your main activity. Seeing a show at the City Theater, but want dinner at Morcilla? Park in Lawrenceville, get a bike to the show and a bike back. Going to the Pirate game but find the North Shore bar options lacking? Quickly get into Downtown proper without having to negotiate with a pedicab driver.

Yes, you’ll need to be safe; if you’ve been drinking, don’t start wheeling a two-wheeled vehicle you’re not all that familiar with city streets. And this method works best if you’re already a bit familiar with the trails, bike lanes and less-traveled streets that connect these neighborhoods.

But if you’re used to the occasional daytime ride, you should have the hang of Pittsburgh bike trips already — and you’ll get in some added exercise (which I, for one, could certainly use) just by getting around town, for considerably less money than you’d pay getting around any other way.

Ready to trade your Lyft reviews for a bit of open-air pedaling? Here are four incredibly useful connections:

This article appears in the July 2018 issue of After Dark.
Categories: After Dark