In the early 1990s, Rick Sebak witnessed an exclusive Oakland performance by Sting, frontman for The Police. 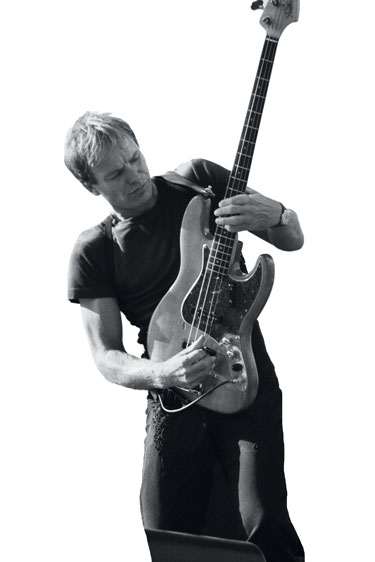 Whenever I give a tour of WQED’s building, I invariably mention Sting. The British singer/songwriter best known as the frontman for The Police — his real name is Gordon Sumner — got his nickname thanks to a black-and-yellow-striped sweater (which a Steelers fan might covet) he wore early in his singing career as a member of a Newcastle-based band called the Phoenix Jazzmen. Some thought the sweater made Sumner look like a bee, and the nickname stuck.

In 1977, at 25, Sting moved to London and helped to put together a new punk trio called The Police with Stewart Copeland and Andy Summers. In 1978, they cut their first album, “Outlandos d’Amour,” and released a song called “Roxanne” that Sting had written.

In the Fall of ’78, The Police flew over for their first American tour. It was a low-cost, three-week adventure that had them driving, schlepping equipment, setting up and performing by themselves. They first played at CBGB’s in New York, then drove around the eastern United States in a Ford Econoline van.

They played in Pittsburgh at a club called Phase Three in Swissvale, one of the first local venues to feature punk bands. I would have liked to have seen that show — the crowd reportedly booed the band — although Andy Summers doesn’t mention it in his memoir about those years, “One Train Later.” Summers does remember a gig in Poughkeepsie in which they played a full set for an audience of four people.

By the next year, “Roxanne” and “Can’t Stand Losing You” were hits, and The Police were back in Pittsburgh on March 20, 1979 for a celebrated show at the legendary Decade in Oakland. They were back in 1983 at the Civic Arena; it was their last Pittsburgh appearance before the band broke up in ’86 (although the reunited band did return to play at the Post-Gazette Pavilion in 2008).

Sting came to Pittsburgh often as a solo act, in 1991, ’93, ’96 and 2000, all at the Pavilion (though it was called the Star Lake Amphitheatre for all but the last of those performances; it since has changed its name again, to the First Niagara Pavilion). I missed all of those shows; in fact, I have seen Sting perform only once.

Early in the morning of July 16, 1993, when his song “Fields Of Gold” was new, Sting was scheduled to perform the ballad on BBC One’s “Top of the Pops.” Because he was in town at Star Lake the night before, the British program’s producers needed a place in which Sting could be captured on video and transmitted via satellite to the U.K. They decided WQED’s Studio A (where all of the Mister Rogers’ Neighborhood programs were taped) was just right.

We WQED employees were told that no one would be allowed in the studio during the performance, but I was a friend of Patty Walker, who was in charge of studio rentals back then. She let me hang out if I kept my mouth shut. The studio audience was about the same size as the one The Police faced in Poughkeepsie in ’78.

As I remember, Sting and the band were not happy to be up early for a performance. The players were to mime with their instruments; the musical track had been recorded early, most likely in the U.K. Sting, however, would sing live to tape, broadcast back to England via satellite.

There were a couple of rehearsals and some audio-equipment problems, but soon, it was showtime. Sting’s familiar voice sounded strong and pure. The band members perked up a bit (although not too much) and the BBC got its fresh recording of a song that was still rising on the charts. I now tell people how privileged I felt to see one of the best in the world sing in Pittsburgh on an otherwise uneventful summer morning.

This article appears in the September 2016 issue of Pittsburgh Magazine.
Categories: Rick Sebak