Sticks and Stones and Rubber and Glue

The childishness that the mayor's office displays on a regular basis shouldn't surprise me.

Tucked into this article from the Pittsburgh Post-Gazette about the $452 million bid offered for the proposed parking lease lies an interesting tidbit:

The mayor’s office initially said the bid-opening would be private, prompting the Post-Gazette to seek a court order Monday to make the proceedings public. Common Pleas Judge Alan Hertzberg denied the request.

The mayor’s office then invited the media to the bid-opening and a news conference that followed but excluded the Post-Gazette.

Mr. Ravenstahl briefly met with Post-Gazette reporters after the news conference to announce the high bid.

He said he has tried to be as open as possible about the lease proposal, and he viewed the newspaper’s legal effort as an attack on his administration’s credibility.

The childishness that the mayor’s office displays on a regular basis shouldn’t surprise me. I mean, this is the administration that claimed the reason the media wasn’t made aware of the mayor’s whereabouts on that snowy February day was to "prove a point" that the media is irresponsible.

I don’t know how that math adds up either, so let’s just not even go there.

Now, here is the Post-Gazette doing what any newspaper should do: Finding out what’s going on behind closed doors when what is going on behind those doors has the opportunity to have a long-term impact on the financial health of the City of Pittsburgh. We’re talking 50 years. Half a century. This is important stuff!

They essentially said to their playground pal Lukey, "Hey, we’re playing this game, and you’re not really following the rules. I’m telling."

And instead of saying, "OK, I’ll play nicer," Lukey said: "I’m taking my ball and I’m going home and you’re a stupidhead who smells, so stick it in your ear."

Now he’s shunning the P-G, excluding the paper to once again teach it a lesson (as only Lukey can do). And the lesson Lukey is teaching the Post-Gazette is this: Bring it.

Nothing is gained by acting childish. The Post-Gazette is not slinking back to the Boulevard with its tail between its legs all, "Gosh. We better be nicer to that Lukey kid, or he’ll take our lunch money or even worse … INDIAN BURNS."

No, I’m pretty sure the Post-Gazette is going to go take some boxing lessons from a bigger playground pal and then come out swinging even harder the next time it thinks something is a little too hush-hush for their liking.

The mature thing to do would have been to invite them into the press conference, kill them with kindness and then say, "See, told you I wasn’t hiding anything."

This childish neener-neener, scolding, exclusionary play of power has once again damaged any respect I have for the administration and Lukey would do well to realize that the credibility of his administration cannot be attacked if there isn’t any left to attack.

It can’t be said enough. Whoever makes these decisions for the administration of Mayor Luke Ravenstahl—whoever said "Fine. Let’s open the meeting, but shut the door when the Post-Gazette arrives," should be fired.

Unless that’s actually Luke Ravenstahl, then it’s up to the people to do the firing.

Of course, this is Pittsburgh, and we could have a mayoral ballot that looks like this: 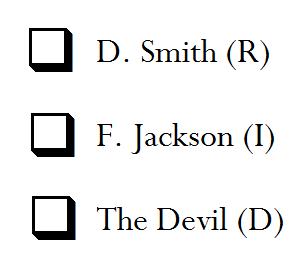 And the Devil would win by a landslide.

This article appears in the September 2010 issue of PittGirl.
Categories: PittGirl