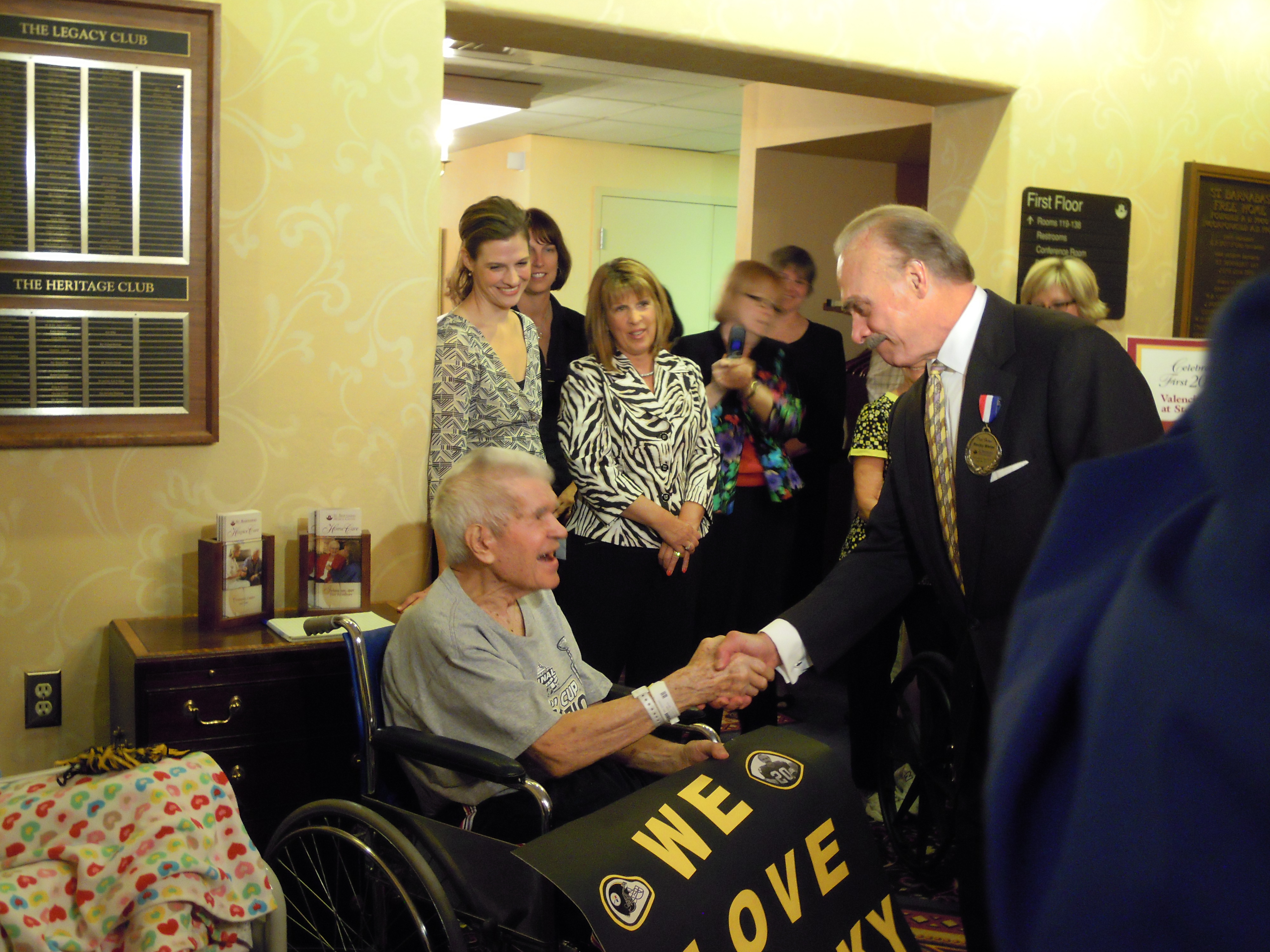 Walking into The Washington Place at the St. Barnabas Gibsonia campus was reminiscent of a Steelers tailgate. Black and gold surrounded the room, and an inflatable football player stood in the corner. Energized residents wore American flags along with the obligatory black and yellow as they held signs that proclaimed, “We love Rocky Bleier” and “Rocky’s Our Hero.”

That was before he even arrived.

At its 111th Founder’s Day celebration in April, St. Barnabas presented Bleier with The Hance Award. Given each year to a person of national acclaim who has made a significant impression on American lives, The Hance Award was named after Brother Gouverneur P. Hance, who founded St. Barnabas in 1900. A four-time Steelers Super Bowl champion, Vietnam veteran, author and businessman, Bleier fit the bill. He forever joins ranks with the likes of Fred Rogers, Patch Adams, Debbie Reynolds, General Chuck Yeager and Dr. Edwin “Buzz” Aldrin, to name a few.

Bleier began his work with St. Barnabas seven years ago when he started participating in the Presents for Patients program. During the holiday season, residents are matched with individuals who visit with them and bring a gift. “It touches people’s lives,” Bleier said. In its 27 years, Presents for Patients has raised gifts and visits for more than 431,000 men and women in Pennsylvania, New York, Ohio, West Virginia and Tennessee.

When Bleier arrived at The Washington Place, the residents came alive. “That’s the biggest smile I’ve ever seen on your face,” Angie Borgo, Administrator of St. Barnabas Nursing Home, said to one resident. He made his way around the room, shaking hands and talking with the residents, who lit up as he walked by.

Clarence Liebel and his wife, Anne, were impressed by Bleier because of his humble attitude. A World War II veteran, Liebel lost his left eye and two fingers during his stint in the Marshall Islands. And as Purple Heart recipients, Liebel and Bleier share a common bond. “I think it’s such an honor to have a man of his caliber to be here at St. Barnabas,” Liebel said. “I never saw so much excitement,” Anne adds. “He’s a great man.” 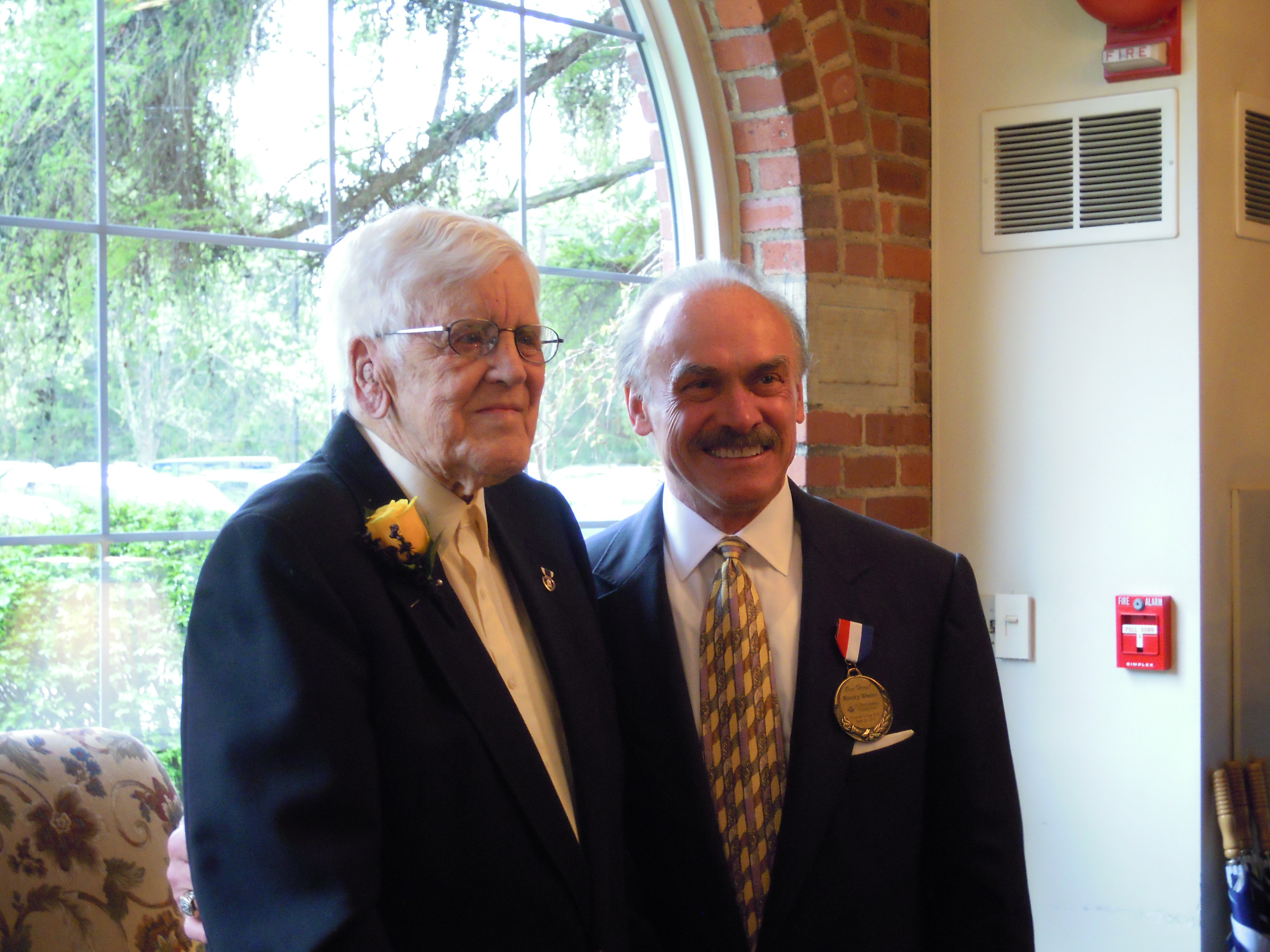 It’s not just the residents who are inspired by Bleier’s charity, but, rather, the residents inspire him. “We’re all human beings,” Bleier said. “We have feelings and families. We’ve loved, and we’ve lost. You get to understand that more and bond with those emotions.” He continues by saying that his run with the Steelers was a shared experience by everyone, and when he visits the residents at St. Barnabas, they are taken back memories of younger days. “Anyone that represents that era,” Bleier adds, “It’s like home.”

Fellow Steeler and Hance Award recipient Andy Russell attended to show his support for Bleier. “We were taught by the Rooneys that it’s important to give back,” Russell said. He added that enjoyed seeing another teammate help with the St. Barnabas organization.

The ceremony began with a video montage of Bleier’s accomplishments, from Vietnam to his last game-winning touchdown against the Kansas City Chiefs in 1980 to photos of his visits with St. Barnabas residents. Russell, St. Barnabas President William V. Day and Chairman of the Board John J. Curran gave speeches about Bleier’s football career and charitable works. Then Bleier took the stage.

“I know you want this to be brief,” he began his acceptance speech. “But it’s not in the contract,” he joked. As he continued, Bleier talked about teamwork and goals, hopes and failures. Ultimately, though, he said that anything is possible if we choose to believe in our dreams.

Bleier’s contributions to St. Barnabas, whether big or small, make a difference in the residents’ lives. For Liebel, it was seeing a fellow veteran. For others, it’s a chance to see one of their heroes. Though he may not have a cure for their problems, be it illness or loneliness, for a short while Bleier brings them happiness and will continue to do so in years to come.

This article appears in the June 2011 issue of Pittsburgh Magazine.
Categories: Sports