As a franchise QB with Hall-of-Fame credentials and as the only player in the locker room that’s actually won a Super Bowl in a Steelers’ uniform, Roethlisberger is perfectly positioned, Colbert insists, to run the show. 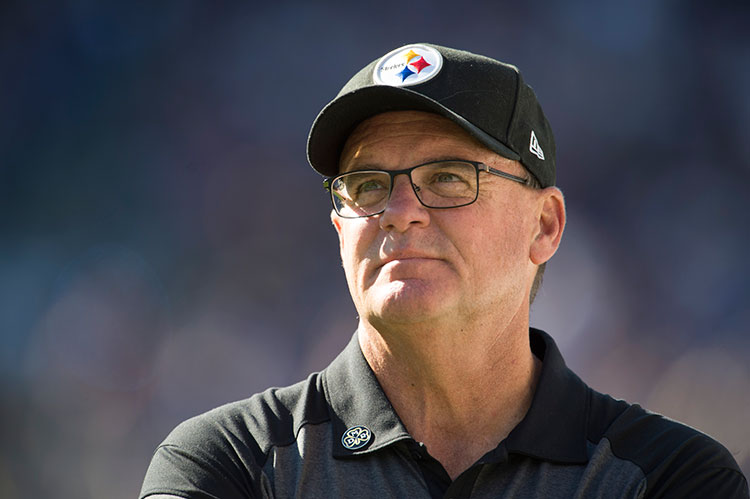 The Steelers have issues, General Manager Kevin Colbert acknowledged this week, but how their quarterback accepts and addresses his role as the team’s “unquestioned leader” isn’t one of them.

“I have no problem with him,” Colbert insisted. “He can call me out, and that’s fine.

“What he does, I totally respect.”

Roethlisberger questioned the Steelers’ drafting of Mason Rudolph on the third round last spring –– Rudolph was immediately perceived as the potential eventual successor to Roethlisberger at QB –– as opposed to a player who might have actually helped the Steelers win last season.

But it’s Roethlisberger’s role in the ongoing Antonio Brown saga, and specifically Roethlisberger’s perceived responsibility for the Steelers and Brown arriving at the irreconcilable differences stage of their relationship that’s been getting Big Ben crushed all of a sudden by the national media.

Ex-players now performing with a microphone or a Twitter account have been as relentless as Terrell Suggs in their assault on Roethlisberger lately.

Colbert had apparently had enough by Wednesday, when he met with local media to discuss Brown and Le’Veon Bell –– another impending divorce –– but wound up talking about Roethlisberger, initially unprompted and repeatedly as the guy every other Steelers player ought to be behind.

“If our players are smart, they’d listen to him,” Colbert insisted.

But as a franchise QB with Hall-of-Fame credentials and as the only player in the locker room that’s actually won a Super Bowl in a Steelers’ uniform, Roethlisberger is perfectly positioned, Colbert insisted, to run the show.

“I want them to step up and say, ‘Hey Ben, what do I have to do? Can I do this better? What do we have to do to win a Super Bowl?’” Colbert maintained.

Colbert even characterized Roethlisberger’s “elder statesman” status with the Steelers as a “burden,” a “huge responsibility,” and a “tremendous weight for him to have to carry week in and week out.”

That might have been laying it on a little thick.

But it’s likely the hard sell was a result of Colbert wanting to clear up any lingering doubt in the locker room, as well as respond to all the recent criticism.

“He has 52 kids under him, quite honestly,” Colbert said, referencing the Steelers’ 53-man roster.

But even a receiver with Hall-of-Fame bonafides, even the greatest receiver in Steelers’ history, has to take a back seat to the franchise QB.

Colbert spelling that out in no uncertain terms was a significant and necessary first step in the Steelers’ attempt to recover from the gut-punch that was missing the playoffs.

There are many more steps to take.

They turned the ball over too many times last season, Roethlisberger included, especially in the red zone. Their defense lacks play-makers, especially in the secondary. Their kicker, Chris Boswell, seemingly forgot how to put the ball through the uprights. And it’s looking a whole lot like they’ll be trying to crawl their way back into the playoffs without Brown as well as Bell, two of the most accomplished players at their positions to ever play for the Steelers.

“That’s how this game happens,” Colbert said. “There are great players that come through. They either get older or you can’t afford them or they get hurt and you have to recognize that and move on.

“It’s our job to keep up with that change.”