They no longer have Le’Veon Bell and Antonio Brown, but they now have options aplenty after what they managed to land in the NFL’s annual three-day talent-grab. 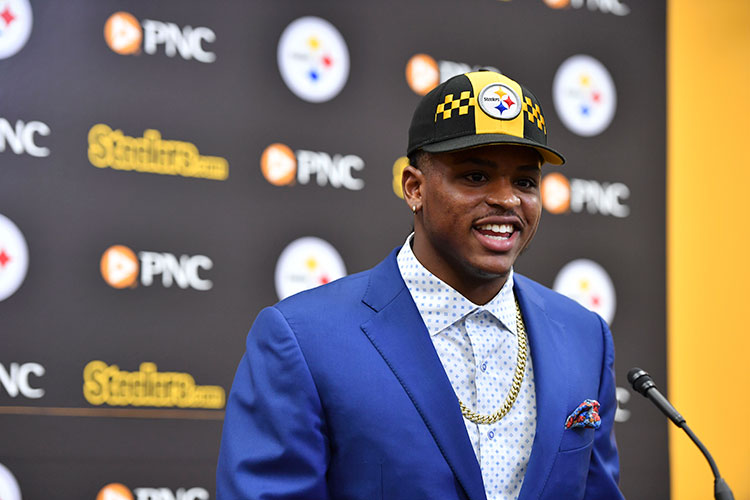 Three days of draft picks and press conferences are destined to generate their share of entertaining sound bites and memorable lines, and in these areas, especially, the Steelers’ draft did not disappoint.

There was president Art Rooney II warning against making a habit of including future selections in trades, in part because “you don’t want to get too Buddy Parker-ish.”

There was General Manager Kevin Colbert maintaining even the Steelers’ third-day selections graded out above “a Mendoza-kinda line.”

There was the running theme that, at times, made the proceedings feel and sound like an infomercial for the Mid-American Conference.

And there was tight ends coach James Daniel acknowledging, at least momentarily, the suggestion that fifth-round tight end Zach Gentry and Heath Miller were somehow comparable.

“They were both quarterbacks,” Daniel allowed before laughing out loud.

Good stuff and then some.

But what really resonated was the clarity with which the Steelers’ re-established their self-proclaimed identity as a Super-Bowl-or-bust organization.

That declaration was made in response to a softball question about 20th overall being a lot higher than the Steelers are normally accustomed to selecting. 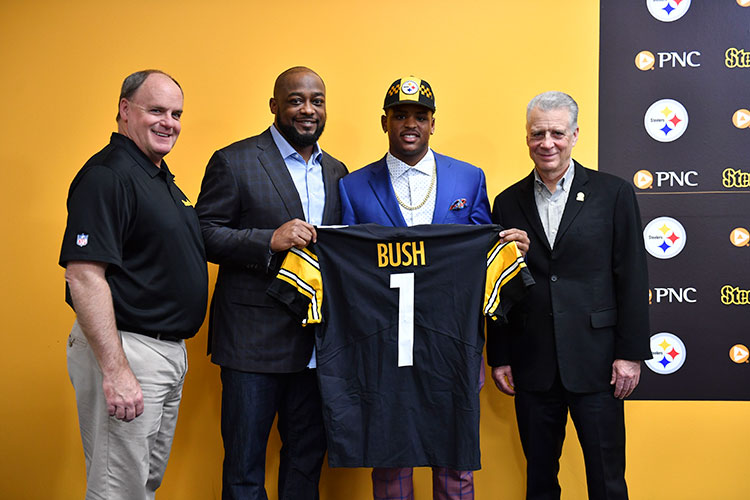 Colbert knocked it out of the park.

“You got that right,” Mike Tomlin added.

It was the type of bravado and rhetoric the Steelers usually spout.

But coming out of the non-playoff season they had just suffered and the emotionally exhausting offseason they had just endured, it should be perceived as reassuring by Steeler Nation that those at the top of the Steelers organization were still spouting it.

The satisfaction with the draft, specifically the decision to do what had to be done to trade up in the first round and get the player they had to have, inside linebacker Devin Bush, no doubt inspired the GM and the head coach to stick their chests out.

That the potential hits kept coming thereafter might eventually prove as satisfying as such a development was timely.

If Diontae Johnson is as good a wide receiver as the Steelers insist, he might do for the offense what Bush has the pedigree to do for the defense. At worst Johnson should help reinvigorate the special teams, and he shouldn’t be the only draft pick that contributes in that capacity.

Justin Layne looks the part of an eventual starter and fixture at cornerback.

Benny Snell is the type of short-yardage, goal-line and seal-the-deal running back who might be particularly impactful.

Sutton Smith could be a sixth-round gem if the Steelers can find a spot on the field from which he can excel as an undersized pass rusher.

And Ulysees Gilbert, like Smith, appears to have skills if not a defined position.

The possibilities the Steelers are suddenly pondering are seemingly as endless as they are refreshing.

That explains why Tomlin eventually felt compelled to reference a “cleansing” during an interview with ESPN.

Finally, it isn’t all about Le’Veon Bell and Antonio Brown any longer.

And while we haven’t heard the last of those two in conjunction with the Steelers, the Steelers have most assuredly turned the page and begun the process of living life without them.

Provided they can stay above the Mendoza Line and below becoming too Buddy Parker-ish, they may yet be onto something.

Even if the Gentry-Miller comparisons ultimately begin and end with the positions they have in common.