When a team blitzes as infrequently as the Steelers did against the Redskins –– you have to start wondering if the Blitzburgh tradition is one the Steelers are interested in upholding. 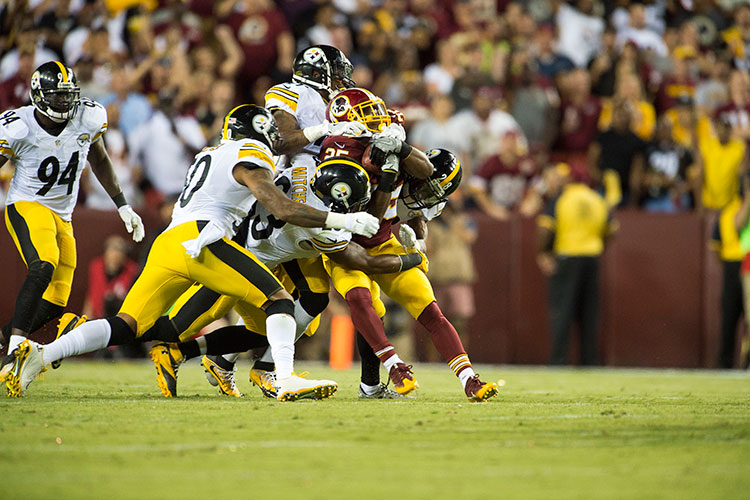 Allowing a mere one touchdown and 16 points in a winning performance on the road would have been cause enough for celebration for last year’s Steelers’ defense.

But Cam Heyward didn’t want to hear it after Steelers 38, Redskins 16.

“Our defensive line and our front has to be better,” Heyward insisted.

The 16 points the Redskins managed were fewer than the Steelers had allowed in all but six games in 2015 (in all but four games if you discount the two played against Cleveland).

And one Redskins field goal was attributable, at least in part, to a Ben Roethlisberger interception and a possession that began at the Pittsburgh 37-yard line.

But Heyward couldn't get past Redskins quarterback Kirk Cousins attempting 43 passes and escaping without being sacked.

“Our pass rush sucked,” Heyward assessed. “I sucked, it falls on me and goes all the way down.

“To get to where we’re gonna get to, I have to be a lot better.”

You’d expect nothing less from a player born and raised in the Blitzburgh tradition.

But when a team blitzes as infrequently as the Steelers did against the Redskins –– an unofficial estimate of three times is well within the ballpark if not spot on –– you have to start wondering if that Blitzburgh tradition is one the Steelers are interested in upholding.

The quest for pressure remains in their DNA.

But defensive coordinator Keith Butler had spent the preseason emphasizing the need to generate pressure with just four pass rushers and honing the schemes required to make it happen.

It wasn’t always the same four players rushing the passer on Monday night at FedEx Field, but the Steelers almost always rushed four at a time.

And even though they didn't get the push they were looking for up front, the small army of players dropping into coverage were more than enough to get the job done.

It was another example –– there were several last season –– of the Steelers’ ability to create an opponent-specific defensive gameplan that focused more on what had to be done than what the Steelers have traditionally done.

They’re getting better at that.

And they’re getting better at playing defense in general.

“We’ve been playing together for a while now,” safety Mike Mitchell explained. “You guys (in the media) keep talking about our inexperience but we’re very experienced. There’s not a guy out there that hasn’t played in the NFL with the exception of our two rookies that are used situationally.”

No. 2 pick Sean Davis played slot cornerback in the five-defensive backs “nickel” defense and a little safety when six defensive backs were required in the “dime” against the Redskins.

And No. 1 pick Artie Burns got his NFL feet wet as an outside cornerback in the “dime.”

Butler has acknowledged the necessity for both to contribute as rookies.

But if one game is any indication, neither need be a savior.

“The core group of guys out there are all experienced, we’ve all been playing together,” Mitchell continued. “We’re a better unit, we’re more sound.”

Sound enough, apparently, to be good enough even when at something less than their best.

That might not be cause for celebration just yet, but it’s encouraging.