‘Steeler for Life’ Has a Nice Ring To It For Greene

Kevin Greene may have played 20 percent of his career as a Pittsburgh Steeler –– but he retired 100 percent black and gold. 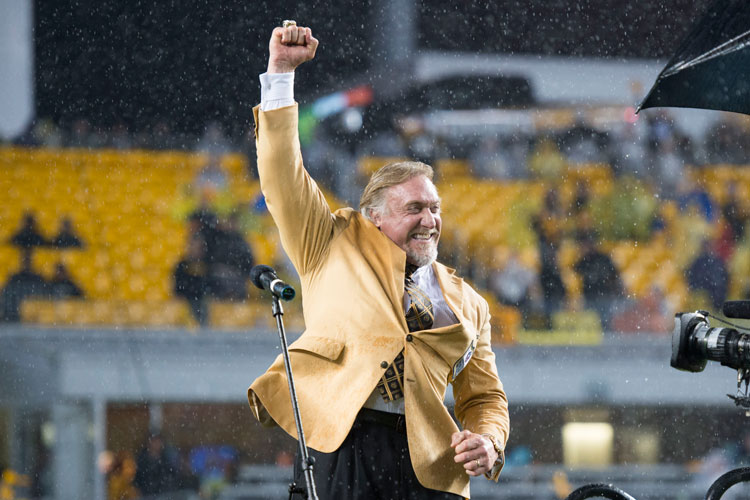 It seemed absurd at first, the notion that Kevin Greene could spend just three of his 15 NFL seasons in Pittsburgh and still want to receive his Pro Football Hall of Fame ring at a Steelers game, associating himself forever, in effect, with the Steelers.

For the record, even the Pro Football Hall of Fame doesn’t consider Greene a “longtime member” of the Steelers, and it doesn’t include him in the Canton, Ohio contingent comprised by Bradshaw, Harris, Ham and Blount, as well as 17 others.

Greene is instead officially listed as a Hall-of-Fame player who spent “a minor portion” of his career with the Steelers, a group that also includes Len Dawson, Bert Bell, John “Blood” McNally, Marion Motley and Cal Hubbard.

But to Green such characterizations are just details.

He wanted what he wanted. And he wanted it badly enough to first express his desire to the Rooneys shortly after he had officially been anointed as a Hall-of-Famer last February.

In retrospect, it couldn’t or shouldn’t have been any other way. 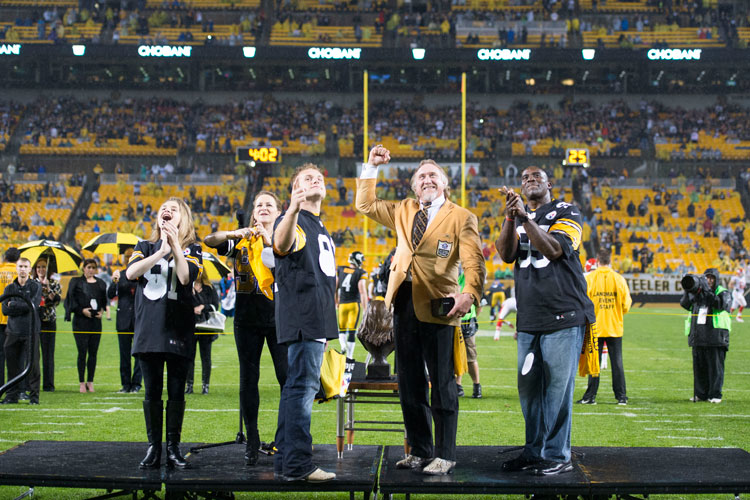 “No. 1, it put me on a different stage,” Greene explained of a Steelers tenure that commenced in 1993 and ended in 1995, shortly after the Steelers lost Super Bowl XXX to the Dallas Cowboys. “No. 2, I was surrounded by great brothers, Hall-of-Famer Rod Woodson, Greg Lloyd –– of course Greg just meant everything to my game –– Levon Kirkland, Chad Brown, Carnell Lake, Jerry Olsavsky, Darren Perry. I had some brothers on that team that I loved, that I knew respected me and loved me. We were ‘all in’ to each other and ‘all in’ for the organization and we wanted to do something special.

“Playing in front of Steeler Nation was another thing that was just a phenomenal experience for me. Just the excitement, the electricity that I felt being there in Three Rivers (Stadium), it was just unlike anything else I experienced in the NFL.”

Greene’s three Steelers seasons were preceded by eight playing for the Rams and followed by three in Carolina and one in San Francisco.

They were as representative as any of an era in Steelers’ history destined to be forever unappreciated because it was in era during which the Steelers never won the Big One.

“We’re just another footnote in NFL history,” Greene acknowledged. “You have to bring home a Lombardi (trophy) to be remembered.

“We almost did but we fell short. That will haunt me forever.”

It was, in retrospect, a memorable time.

It was a time in which the Steelers’ defense wreaked havoc with regularity, a time when the mere mention of the word “Blitzburgh” was often all that needed to be said.

“One of our base defensive calls was a fire-zone pressure, ‘Eagle Wide Cross Inside Fire-Zone,’” Greene recalled. “It actually dropped Greg and I into coverage and it rushed Levon Kirkland and Chad Brown on a cross-stunt up the ‘A’ gaps. It was our lead huddle call some games, our No. 1 call, our first play against the opposing offense, ‘Eagle Wide Cross Inside Fire-Zone.’ And I remember looking at Greg and Chad and Levon and going, ‘Yeah, baby, it’s on, we are coming after people today.’

“It was just an awesome feeling.”

That feeling stayed with Greene, even as he changed teams.

Even as he coached against the Steelers in Super Bowl XLV as the outside linebackers coach of the Green Bay Packers.

“It was really bittersweet, our victory over the Burgh,” Greene insisted. “It wounded me … but I did get a Super Bowl ring.”

Now, he has one from the Hall of Fame, too.

Greene receiving it in his adopted professional home at halftime of a blowout made perfect sense, in retrospect.

In addition to honoring Greene, it honored a Steelers’ team and a Steelers’ era that ought to be remembered more fondly, even without a Lombardi.

Not that Greene could hold those days and those times in any higher regard, even if his Super Bowl quarterback had been Ben Roethlisberger rather than Neil O’Donnell.

“Just that steel-freakin’-mill mentality,” Greene said, when asked why he had remained so attached years after the fact. “Hard-working, bring our freakin’ lunch pale, get the job done, no excuses, it’s your job, they pay you to get ’er done, just that mentality. We’re Steelers, and what we do is kick people’s asses, and that’s the standard of being a Pittsburgh Steeler.

“I just knew, Tara, my lovely wife, we knew this was the right place to be.”