Stay In. Repeat. Then Go to Six Penn.

This weekend, I go against the very nature of the blog and, in the name of keeping you safe and warm this holiday weekend, recommend a few things to do … at home. 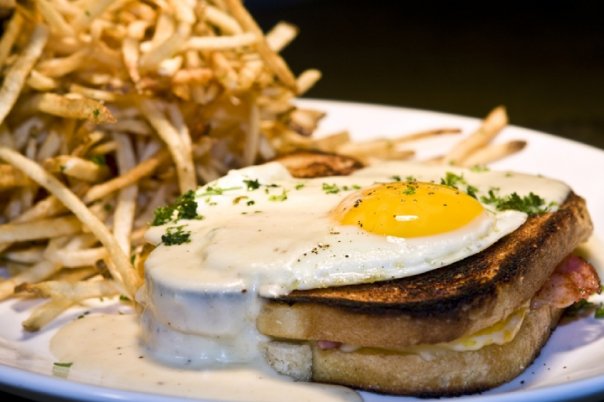 Brunch at Six Penn Kitchen might be the only reason you leave the house this holiday weekend.

Far be it from me to use an innocent nightlife blog like this one as an excuse to get on my soapbox, but there are some causes that just need all the attention possible. So, briefly, and with minimal proselytizing, let me just say: In the name of all that is sacred, do NOT go shopping on Black Friday.

Even putting aside the numerous accidents—and even deaths—that have resulted from doorbuster trampling incidents during the past few years, Black Friday shopping is one of the most miserable activities imaginable. Even in this hectic holiday season, you really want to go to the mall at it’s lowest degree of fervor—when you can park, shop and buy without The Real Housewives of Butler County cold-cocking you for an $18 DVD player. The chances of your leaving that shopping center miserable, exhausted and feeling more than a little evil are at about 99.5 percent. And, a hint for those desperate for the rarest of deals: You are currently reading this column on the Internet. The Internet also features shopping. With minimal effort, you can almost certainly secure an $18 DVD player online, too.

It’s a madhouse out there, and you’ve got turkey to digest. With that in mind, I will go against the very nature of the blog and, in the name of keeping you safe and warm this holiday weekend, recommend a few things for you to do this weekend … at home.

FRIDAY NIGHT: LEFTOVERS & AN ON-DEMAND DOUBLE-FEATURE.
I am not a food expert—except in that, at any given moment, I am likely to be near food—so I’ll refrain my leftover comments to one keynote. If you make a turkey sandwich without layering stuffing and gravy and mashed potatoes directly on top of the meat, you are making a grave mistake.

I am, however, something of a connoisseur of at-home entertainment. If you’re fortunate enough to have a cable plan that includes On-Demand movies, this is the perfect evening for them. Your opening film should be something fresh out of theaters and on the lighter side (so you won’t mind pausing it for another slice of pumpkin pie) and agreeable to whatever assorted family members you have still hanging around.

I highly recommend Scott Pilgrim vs. The World, which should be out on any cable system you can name. It’s an excellent and unique action-comedy, set up as a video game come to life, with Michael Cera in one of his many plucky underdog-in-search-of-true-love performances. It was woefully unloved during its theatrical run; catch it now. If you’ve got kids in the equation, go with How to Train Your Dragon. You may have missed this one in a crowded summer full of 3D kiddie flicks, but it was one of my favorite family cartoons in a while: A young Viking wannabe tries to convince an angry village that fire-breathing dragons are really just misunderstood. Funny, charming, and it looks great, even in 2D.

And if you are going for the double feature, hit up the classic (and free) movies for your second choice. Pick an old favorite. Just not a Christmas movie; there will be plenty of time for those later.

Don’t run out to the state store for missing ingredients. Download a new cocktail-mixing app for your smartphone (skip the ones you have to pay for, the freebies work just as well). Plug in to the app what you’ve got in-house, and ask for a list of drinks that you can come up with.

As long as you have a shaker, ice and some glasses, you should be able to find a couple cocktails you’ve never heard of to try. Go for three or four rounds, and you’ll kill most of the evening. Just remember: If you’re still hitting up the fridge for leftovers, cranberry sauce and gin do NOT mix.

SUNDAY: OK, FINE, YOU CAN LEAVE THE HOUSE. BRUNCH AT SIX PENN.
All right, you’ve been good. You avoided the perils of deadly shopping and crowded roads to the multiplex and restaurants. You’ve torn through all the substantive leftovers in your fridge, and are now staring at 1/4 of a green bean casserole and that JELL-O mold that always appears, but no one ever eats. It’s time to go out.

The brunch at Six Penn Kitchen is a revelation. The restaurant always has an innovative, filling menu, and the morning is no exception—the lineup changes often, but I prefer the bangers and mash with apple fennel sausage with a side of tempura-smoked bacon.

Which is to say nothing of the cocktails. Six Penn recently refined its Bloody Mary recipe, and it’s nearly perfect: A true original, with a recipe made from scratch that will make you appreciate an old cocktail anew. Which is what all good restaurants should do. (Six Penn Kitchen, 146 Sixth St., downtown. Open for Sunday Brunch, 10:30 a.m.-2:30 p.m. Info: 412/566-7366, sixpennkitchen.com)

A happy and safe Thanksgiving to everyone, and thanks once again for keeping an eye on the blog here in the early going. I’ll be back next week with legitimate nightlife options, but for now, stay cozy and warm. And, seriously, stay away from the mall.