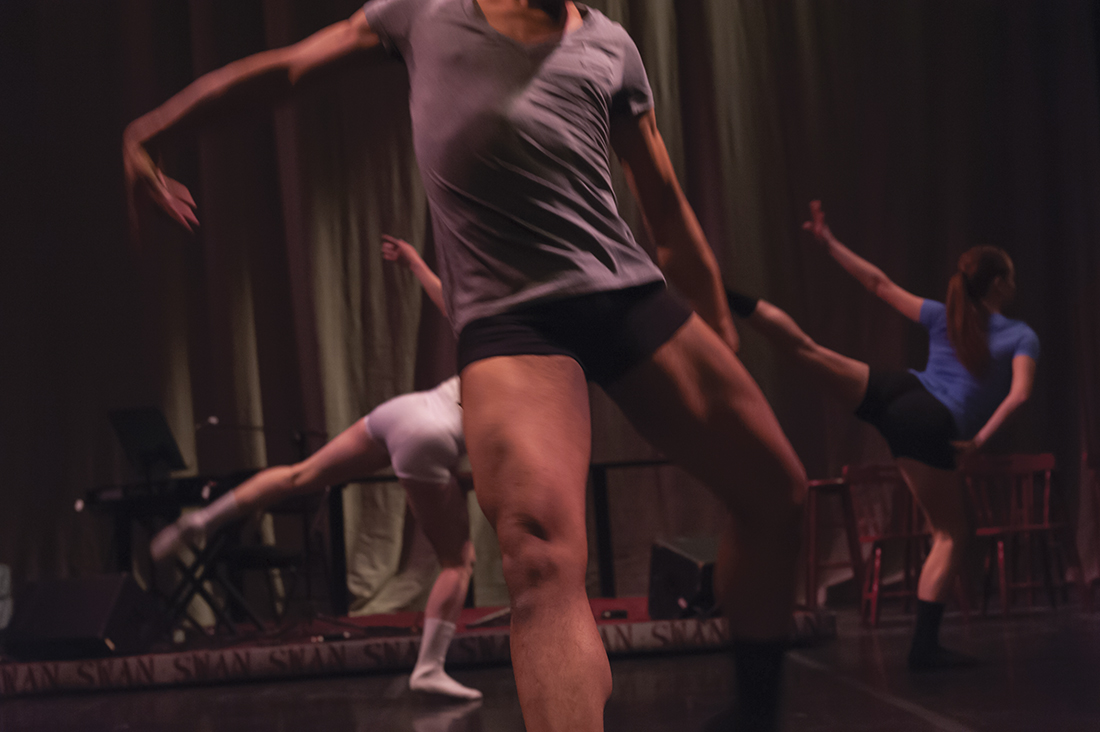 Director Charlie Wein had a good script, talented actors and lots of energy. He knew he could direct a decent show. But he had nowhere to perform — no theater, no black box. Not even a loading dock. Nothing.

So he came up with a solution: Wein produced Toyer, written by Gardner McKay, in a South Oakland apartment in December 2011. Today, his staging of the show continues to be the topic of conversation in local theater circles. The plot features a psychologist and a lunatic who are stuck in a kitchen and living room. Wein used a real kitchen and living room, and he arranged chairs in the corner to accommodate a dozen viewers. Toyer was already suspenseful, but Wein’s claustrophobic staging made it much scarier.

“There was no lobby, no divider, no risers, nothing to separate the audience from what was happening in front of them,” recalls Wein, 23. “It sort of forced the audience to talk to each other during the intermission, just to kind of break the tension a little. Intermission got very emotional sometimes.”

Now, Toyer represents an unspoken genre of Pittsburgh stage — let’s call it “shoestring theater,” to cover the many local companies that have adopted a similar approach. Wein’s production was so successful that he received a private donation to present the show a second time last year using the same space and performers. Patrons loved the minimalist production’s no-frills creativity.

To acquire rights to the play, Wein formally named his troupe Trocar Theater Project (a reference to Toyer), but he never had a website or box office. Yet for those who spent two hours in his den, the experience was unforgettable.

Though Wein recently moved to Chicago, where his acting career has skyrocketed, he remains attached to his underground roots.

“We plan on putting Toyer up again,” he says. “And in general, I think the shows I direct in the future will probably stay rather small; I think that’s where you see performance at its best.” 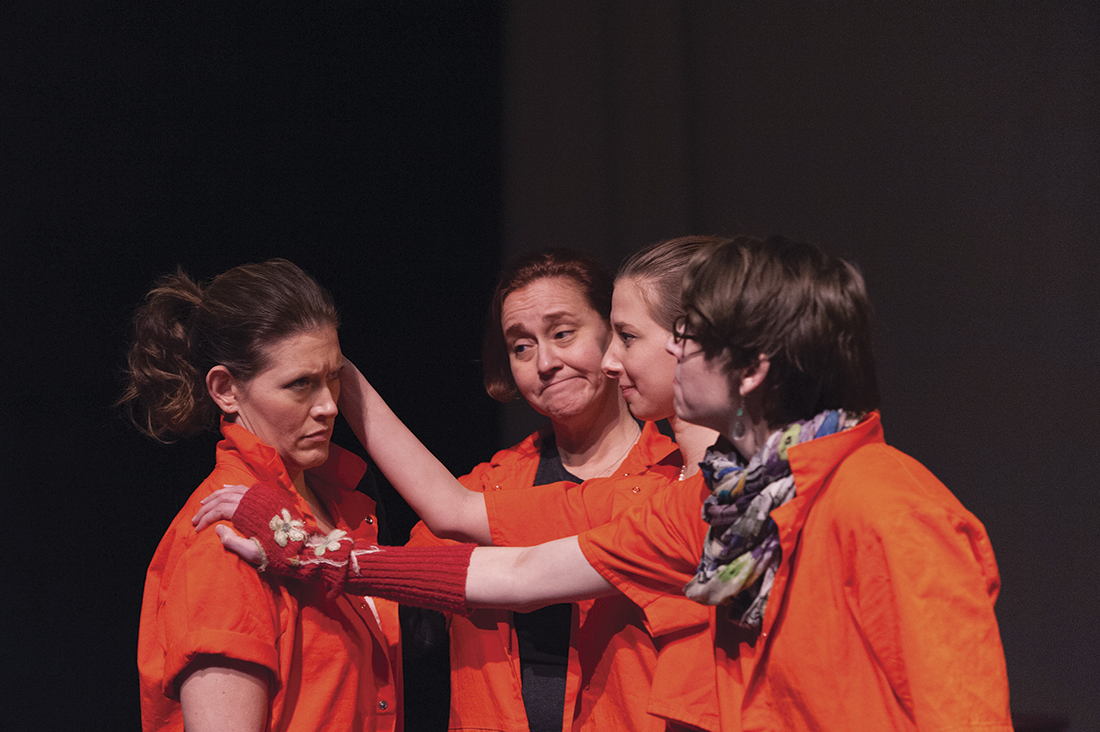 Pittsburgh is packed with theater companies.  In the suburbs, community groups have staged traditional shows for decades. In the city, professional houses such as City Theatre and Pittsburgh Public have garnered national reputations for their superlative premieres. Yet companies need not own real estate; Pittsburgh Irish & Classical rents its stages from the University of Pittsburgh, and Quantum performs in a new, sometimes offbeat location every time.

Then there are the universities: Pitt Rep, Carnegie-Mellon Drama, Point Park Conservatory and Duquesne’s Red Masquers. Even Robert Morris has its own company, under the tutelage of Pittsburgh Musical Theater.

But one of the more unique elements of Pittsburgh’s arts scene is its underground theater, with troupes so small, resourceful and scrappy that they manage to exist through sheer willpower. Companies such as No Name Players, barebones productions, Claochlu Studios, Throughline Theatre, Terra Nova, The Hiawatha Project, 12 Peers Theater — and many others — find their stages in art galleries, black boxes, warehouses, cafés and even undergrad apartments. They don’t have official headquarters, and actors often costume themselves from their own wardrobes. Producers front little to no money, and broom closets can serve as dressing rooms. But hopefuls flock to auditions — because for hungry actors, performing in a great role is better than life itself.

New companies emerge annually, and given the local environment, it’s no surprise. Pittsburgh is home to two performing-arts conservatories and several drama programs, and alumni must either move to thespian hot spots such as New York City or Los Angeles, or try their luck here first. They must decide whether to join Actors’ Equity, the actors’ union, or go it alone. They audition and network, while also holding day jobs. And even when they land a starring role, the show usually ends within the month, so they’re forced to start the cycle again.

Or performers start their own companies and do whatever they want. Unlike larger cities, Pittsburgh has plenty of spaces, and competition is relatively low. If a motivated young director wants to produce a show, Pittsburghers generally shrug their shoulders and say, “Go for it.”


“I had been frustrated enough with theater in my career. I figured I may as well be responsible for my own productions because it was at least my company,” says Joanna Lowe, creator of Cup-A-Jo Productions and, more recently, co-founder of Claochlu Studios (with 72nd St. Films founder Jeff Monahan). “Since I’m the boss, I get to risk the visions I want; it’s incredibly liberating. No one is telling me that I can’t do something or dictating what I need to do. I love that.”

Among other productions and spaces, Lowe, 34, produced Sartre’s No Exit in an art gallery, A Thurber Carnival at Pittsburgh Playwrights Theatre Co. and a multimedia version of Roger Rueff’s Hospitality Suite in a spare loft at Pittsburgh Filmmakers. She prefers simplicity, which means no big set pieces, elaborate costumes or special effects.

But she seizes the opportunity to showcase a mix of media (a rare quality in theater). Lowe also enjoys the greatest perk of being “the boss” — starring in her own productions, most notably in Euripides’ Medea.

A majority of shoestring theater consists of small chamber plays, which attract a modest audience, earn a little bit of press and maybe break even. But some companies shatter expectations: No Name Players’ debut was Big Love, by Charles Mee, an avant-garde retelling of The Suppliant Maidens by Aeschylus. The production values were astonishing: elegant flats, a sand-covered floor, elaborate music and sound effects, and a wardrobe of wedding dresses that — at the end of each night — were soaked in fake blood.

No Name has gone on to produce plays by cutting-edge playwrights, and its annual SWAN Day Pittsburgh (which stands for “Support Women Artists Now”) event is an epic multidisciplinary celebration of the city’s female artists.

No Name, founded by husband-wife duo Don DiGiulio (artistic director) and Tressa Glover (producing artistic director), tries radically new plays every season: They’ll present the Pittsburgh premiere of Viva Los Bastarditos!, a rock-musical comedy by Jake Oliver, next month, and the world premiere of Oedipus and the Foul Mess in Thebes by Sean Graney in August at Off the Wall Productions’ Carnegie space.

Few companies rival the grandeur of No Name’s Big Love, but ambition is everywhere. Last year, Throughline presented an audacious version of August: Osage County by Tracy Letts, a massive three-act, 12-character tragedy that few small-budget producers would ever attempt. Throughline made it happen and won over audiences, not to mention some enthusiastic reviews from critics.

In New York, such large-scale productions would be virtually impossible among young upstarts. And with so much to see Off-Broadway, who would even come?

As a rule, shoestring theater struggles to sustain itself and rarely turns a profit. The economics of a small-budget show are amusing at best and Kafkaesque at worst. Shows flop. Actors quit. Bankruptcies happen. Rarely does anyone walk away with a plump wallet — not even the founders.

“Most people, even theater people, don’t realize how much money it takes to produce a show,” says Jaime Slavinsky, 36, whose Organic Theater Pittsburgh focuses on producing must-tell stories and cleverly links them to environmental issues to raise awareness. Organic and some other small companies rely on grants to mount shows with high production costs, but for Slavinsky, it’s all worthwhile.

In 2011, she produced and starred in Sarah Ruhl’s Dead Man’s Cell Phone, which was a hit with both audiences and reviewers, at ModernFormations Gallery.

“Pittsburgh’s collective blue-collar mentality rejoices as the local theater artists rally together to create new opportunities for each other,” she says. “I’m not afraid to say that I truly believe this is my way to make a difference in the world.”

Underground theater is a challenge for everyone involved, but some labors of love are more arduous than others. After John Gresh, 53, co-founded Caravan Theatre, he spent three years thinking about 800 Words, by Victoria Stewart. Following a cavalcade of readings and workshops, Gresh ended up starring in the show as drug-addled sci-fi writer Philip K. Dick. The production featured projectors, mobile flats, pre-recorded sound and puppets. The pressure on Gresh was intense.

"There are these plays that nobody's been doing in Pittsburgh, which are not just commercially viable, but they're also relevant." – Patrick Jordan, barebones productions


“It didn’t seem to take a rocket scientist to run a theater company,” quips Gresh, “but sometimes I think I know more than I do.”

For his first production, Savage in Limbo, by John Patrick Shanley, Gresh received a large donation from a physician friend living in California.

“We didn’t break even, but we made two-thirds of it back,” Gresh recalls. He offered to return the diminished sum, but his friend declined. “He said, ‘Keep it for the next one.’ It was truly a gift.”

Even companies such as City and the Public started small. The most astonishing upstart in recent memory is barebones productions, established 10 years ago by local actor Patrick Jordan, who’s now in his early 30s. Barebones started with Bash, a four-actor monologue play by Neil LaBute, which Jordan staged in the supply room of a clothing shop below Forward Lanes in Squirrel Hill.

Today, Jordan’s productions routinely wow critics and play to full houses; he stages regularly at the New Hazlett Theater, one of the biggest and most coveted local venues. Jordan’s preferences are all over the map — but he’s known for picking stories that are gritty and sometimes graphic in violence and dialect.

“There are these plays that nobody’s been doing in Pittsburgh,” he says, “which are not just commercially viable, but they’re also relevant.”

During barebones’ decade in existence, a lot has changed: When Jordan produced This is Our Youth, by Kenneth Lonergen, as one of his first shows, he cast two close friends and performed at ModernFormations — and attendees called Jordan’s home phone to reserve seats for the donation-only show.

“Back then, I was hanging clip lights,” Jordan says. “Now, I have a technical director and a sound designer. We’re a real company. There are no restrictions. We’ve been doing this long enough for people to know what to expect.”

Despite his critical success and big goals, such as aiming to produce three shows per year, Jordan still considers his company more underground than mainstream.

“In my mind, I’m still doing stuff underneath a bowling alley,” he says. And although he takes leading or supporting roles in nearly all of his productions, Jordan doesn’t consider barebones a vanity project.

“They’re all ensemble pieces,” he says. “I didn’t start a company as an excuse to act in plays. I hire a director, and when I’m in rehearsal, I’m an actor.”

This article appears in the June 2013 issue of Pittsburgh Magazine.
Categories: Arts & Entertainment, From the Magazine