Sebak recounts tales of Kennywood’s tendency to book big-name acts and celebs, including The Lone Ranger. 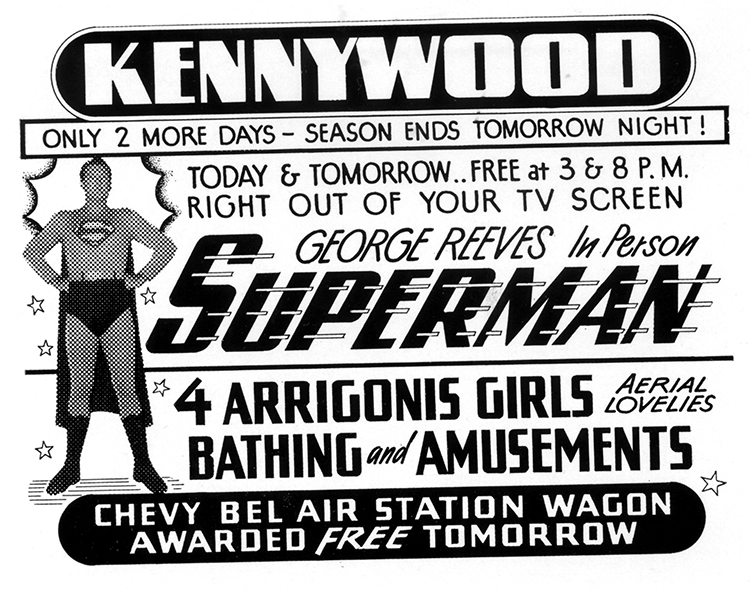 This summer’s big-screen version of The Lone Ranger featured young star Armie Hammer as the masked man. In 1957, actor Clayton Moore was a new TV icon portraying the Ranger. When Moore made a personal appearance at Kennywood Park, he attracted one of the biggest crowds in the park’s long history. More than 45,000 people showed up for the event.

Over the years — as if roller coasters, thrill rides and a merry-go-round weren’t enough — Kennywood has booked thousands of performers, musicians and actors, giving people more reasons to come to the park. That may have started with the scheduling of bands to provide music for the Dance Pavilion and free Sunday concerts in the Bandshell.

Although many pop-culture commentators of the 1950s thought television might mean the death of amusement parks, it turned out that people loved seeing TV stars in person at the parks. The Lone Ranger was the biggest draw among the many actors and characters to appear at Kennywood, but he wasn’t the only small-screen icon to visit.

The Three Stooges were surprised by the enthusiastic reception they got in 1960 — thanks in part to WTAE-TV’s Paul Shannon, who played their silly shorts on his “Adventure Time” show.

Lassie stopped by. So did Jerry Mathers of “Leave It to Beaver” fame, as well as Captain Kangaroo, George “Superman” Reeves, Clarabell the Clown from “Howdy Doody Time” and Jay North, TV’s original “Dennis the Menace.”

In 1957, child star Mickey Braddock of the show “Circus Boy” was impressed by the “hordes of screaming fans” he encountered at Kennywood. He would mention the park fondly in his 2004 autobiography, I’m a Believer — written long after the performer rose to greater heights of fame under the name Micky Dolenz, a member of the fictional-turned-real pop band The Monkees.

Some visiting musical acts performed on the small “islands” in the huge Kennywood Sunlite Pool. In his blog The Duquesne Hunky [duquesnehunky.com], Jim Volk remembers being there the day the Ronettes were transported in a small boat to the middle of the pool to sing “Be My Baby.” That’s a day I wish I had been at Kennywood.

This article appears in the September 2013 issue of Pittsburgh Magazine.
Categories: Rick Sebak