Stan's in Town Making the Rounds as Pens Celebrate

The Penguins’ successful Cup defense this season also has ensured trips to Canada, Sweden, Finland, Switzerland, Germany and Russia, as well as various stops in and around Western Pennsylvania. 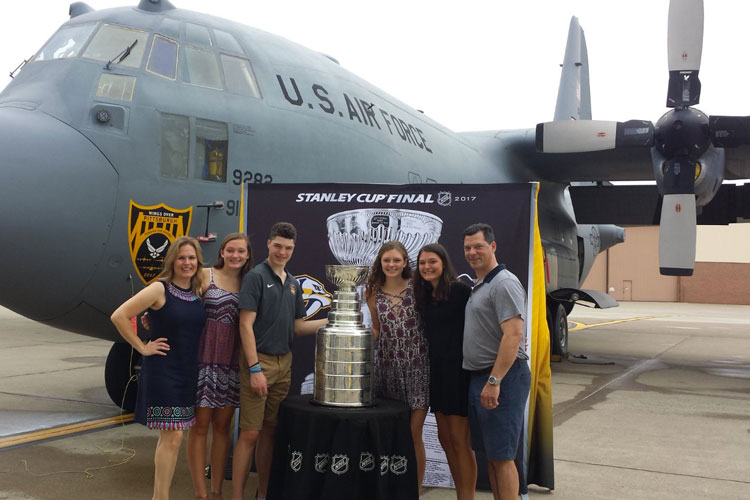 Bill Guerin and family | photos courtesy Philip Pritchard Twitter @keeperofthecup
​
Another “Summer of Stan” is off and running in Pittsburgh, which means the Stanley Cup is liable to show up just about anywhere.

“We could be walking into a doughnut shop getting a cup of coffee,” Phil Pritchard said of fans’ potential impromptu interactions with hockey’s Holy Grail.

That’s how it works when Stan is on the move.

It visited the Shanksville Fire Department, and then the Carnegie branch of the Carnegie Library (the Lincoln Room, to be specific) after last season’s championship.

The Cup gets around.

Pritchard, universally recognized in hockey circles as the “Keeper of the Cup,” has been traveling the world with the NHL’s championship trophy since 1989.

The tradition of each member of the winning organization getting a day with the Stanley Cup (with a Hockey Hall of Fame representative serving as chaperone) dates back to the New Jersey Devils in 1995, Pritchard said.

He and the Cup have covered some ground since then.

Both arrived in Pittsburgh for their most recent visit in late June for “10 days of doing season-ticket holders and corporate stuff,” Pritchard said.

“It’s amazing, the passion Penguins fans have,” he continued. “There were three-hour lines at the (PPG Paints) Arena for five days in a row leading up to Sunday night, season-ticket holders and their families and guests, so they could see it for a minute.”

The Cup ended up at an Italian restaurant in Market Square on Sunday night at the behest of Chris Kunitz, who enjoyed his latest day with the Cup on Monday. 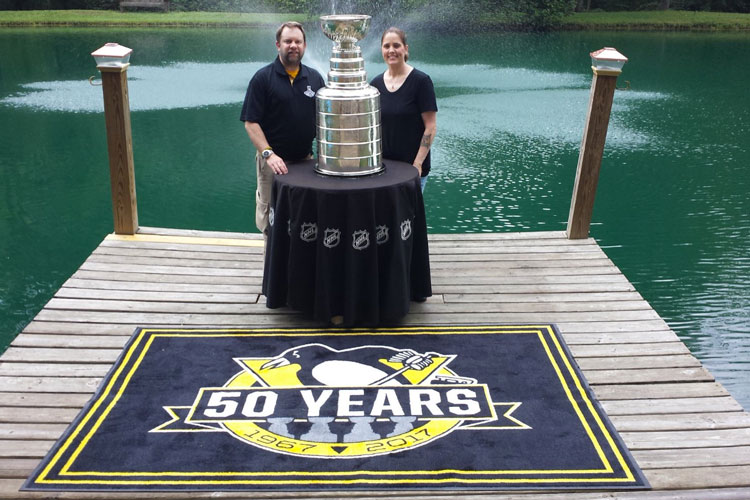 In between, equipment manager Dana Heinze (pictured above with his wife)  brought the Cup to the DVE Morning Show’s studio in Green Tree.

And so it goes.

“Pavel Datsyuk (of the Red Wings) is from the Ural Mountains in Siberia,” Pritchard recalled of a previous Cup pilgrimage. “It’s a long way from anywhere. We’ve done some promotional tours up in the Arctic Circle before.

“There’s ice all the time, they can play hockey year-round there. There are polar bears walking around, it’s incredible.”

The Penguins’ successful Cup defense this season has ensured trips to Canada, Sweden, Finland, Switzerland, Germany and Russia, as well as various stops in and around Western Pennsylvania.

The Cup is world renowned.

“It is now because of social media,” Pritchard explained. “We’re tweeting, people know where it is all the time. And it’s amazing now, because of Amazon and things like that, you’re in the Ural Mountains and there are people with Detroit Red Wings shirts on, with Pittsburgh Penguins shirts. It makes our world smaller.

“Anyone that picks up a hockey stick or puts on skates, they want to play in the National Hockey League and win the Stanley Cup. They want to get here and have that opportunity.”

Heinze’s day on Tuesday began with a stop at DVE and continued in his hometown, Johnstown.

He first brought the Cup home in 2004, after winning it with the Tampa Bay Lightning.

“We had 2,000 people at the War Memorial, and then maybe 2,000 more showed up at my parents’ house for the party,” Heinze recalled.

“We actually ran out of kegs.”

The Cup, Pritchard acknowledged, is subject to local tradition. 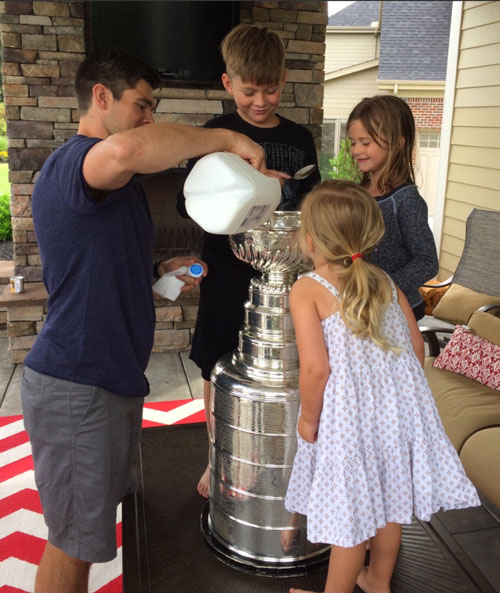 Heinze, like Kunitz (pictured above with his children), celebrated his fourth day with the Cup when he hosted it on Tuesday.

The intent, eventually, was to fill it with a beverage representative of Heinze’s Johnstown roots.