Spotlight: The Hunt for Beauty 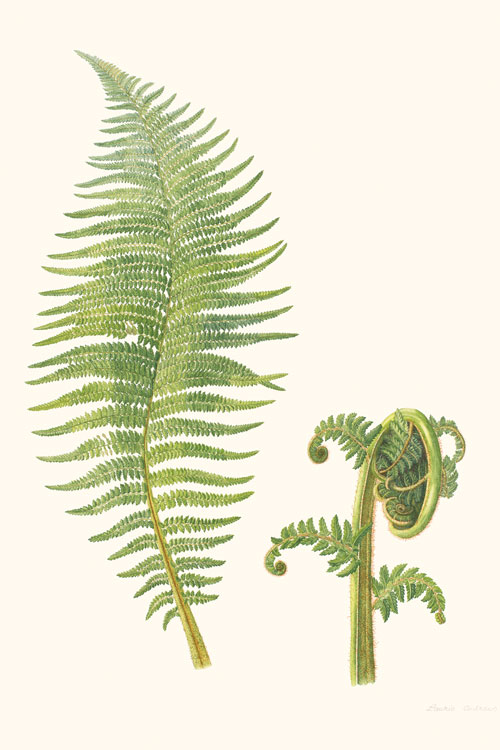 The elevator to the little-known fifth floor of the Hunt Library on the Carnegie Mellon University campus opens onto a spacious penthouse. A door to the right leads to a rectangular gallery where some of the world’s best botanical artists are exhibiting their finest work, as they have every three years (more or less) since 1964.

The gallery is part of the Hunt Institute for Botanical Documentation, and the show is the 15th International Exhibition of Botanical Art & Illustration, on display through Dec. 15. It includes works by 43 artists from 15 countries on six continents. These artists never have exhibited in the Hunt International before and never will again. A list of the 1,129 exhibitors from the 14 previous Internationals represent what arguably is the most comprehensive record of contemporary botanical artists ever compiled.

“The International has become an important milestone,” says Curator of Art Lugene Bruno, who is celebrating her 20th year with the Hunt Institute (huntbotanical.org).

Rachel McMasters Miller Hunt and her husband, former Alcoa President Roy A. Hunt, created what now is the Hunt Institute in 1961, when she donated her large collection of botanical books for research and public use and endowed a library to house them. Within a decade, the Hunt library had grown into an “institute” with four departments, including one for art. The art department created the International in 1964 to encourage contemporary artists to pursue a form that some believed had peaked in the 17th century. Through more than 50 years, the Hunt Institute has fostered a new golden age in botanical art.

The two terms from the title — “Art” and “Illustration” — represent two approaches to depicting natural splendor. Botanical illustration assists the science of botany. For the current International, Hye Woo Shin of South Korea contributed a watercolor matrix of evergreen needles, cones, nuts and seeds. Each specimen is shown in various stages and sliced open to reveal its guts. Notations indicate scale. Anyone who gets a thrill from studying the periodic table of elements will admire the clarity of this illustration.

Despite the detail, though, the exact plants depicted exist nowhere in the real world.

“This is the average of the species,” Bruno says. Even at a time of ubiquitous photography, botanists still rely on illustrators. “The perfect example doesn’t exist in the real world,” adds Carrie Roy, assistant curator of art for the Hunt. Those who study plants need to be able to identify species at different times of the year, at different stages in a life cycle and both outside and inside. Wild plants have been trampled, nibbled and weather-beaten or made scarce by changes in the climate. Only an artist can create an ideal version of the plant. 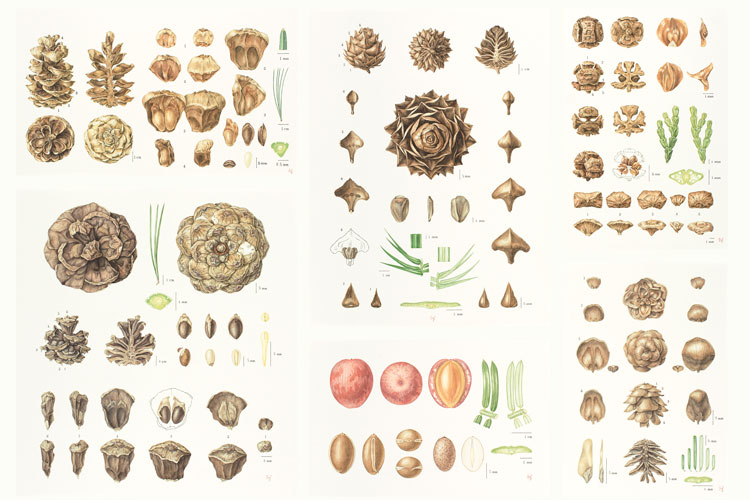 Botanical art aims for extreme fidelity but favors aesthetic value. This is the other side of the craft, often called plant portraiture. A good example is “Magnolia Branches Series #2,” a colored pencil drawing by American artist David Morrison. The subject is a pair of Magnolia twigs with a few buds and some yellowing, bug-eaten leaves.

In life, these twigs would be bound for the compost pile. Here, depicted hyper-realistically at nearly 3 feet tall against a creamy backdrop boasting stark shadows that imply a third dimension, the two tattered twigs become monumental. The care devoted to an apparent cast-off of nature recalls novelist John Updike’s observation that, in art, “any act of description is, to some extent, an act of praise.”

At the heart of botanical art is a balance between accuracy and attractiveness, usefulness and uniqueness. This creates a wonderfully surprising inversion: the scientific illustrations depict idealized plants while the artistic works depict actual plants.

While technical mastery is the most strived-for ideal in the field, botanical artists who have achieved it often discover a desire for freedom and experimentation, which the Hunt Institute eagerly promotes. Bruno and Roy come to botanical art from the world of fine art. They work closely with potential exhibitors in the years between each International, and they encourage artists to push against the strict boundaries of the form, to borrow and translate techniques from modern art as they present scientific fact.

The best works in the International make the real world much more interesting. After peering through a magnifying glass at the hundreds of subleaflets in Australian artist Laurie Andrews’ watercolor “Soft Tree Fern, Dicksonia Antarctica,” every ho-hum flower and weed on every city street corner suddenly become a marvel to behold. “That’s what we look for in pieces, that sense of discovery,” Bruno says.