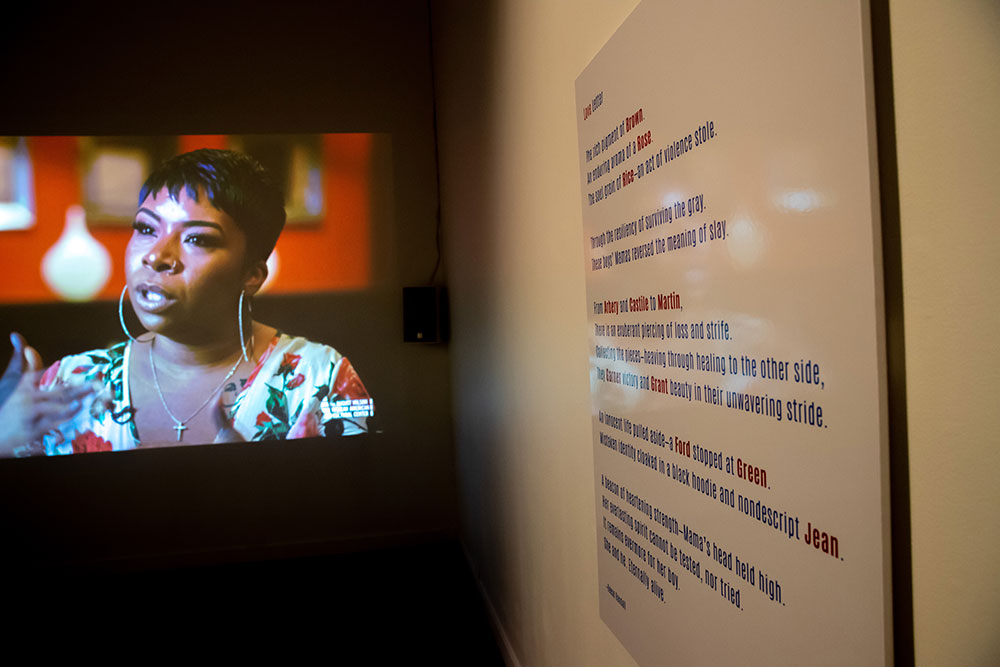 When George Floyd was dying, he called out for his mama. Now, a new exhibit at the August Wilson African American Cultural Center examines the way 10 Black mothers are attempting to heal from the death of their own children.

“OPTICVOICES: Mama’s Boys” is the creation of Pittsburgh native Emmai Alaquiva, an Emmy Award-winning multidisciplinary artist. The exhibit uses photography, artifacts, film and augmented reality to shed light on the healing process that Black mothers go through after losing their sons to systemic violence and policing.

Alaquiva says he hopes that the exhibit can humanize the loss and turn the sons from martyrs to real people with hobbies, dreams and family.

“We tend to romanticize the murder or the death or the loss, and we forget to really focus on what the mothers are left with and what the fathers are left with. So, this was a way to shift a narrative — to not focus on how mad and angry we are,” he says.

Ten mothers from across the country and St. Lucia — the Rev. Wanda Johnson, Gwen Carr, Sybrina Fulton, Lezley McSpadden, Valerie Castile, Michelle Kenney, Samaria Rice, Wanda Cooper-Jones, Allison Jean and Latonya Green — are the center of the work. Seven of their sons were killed by police officers; Leon Ford, the only surviving son of the group, was shot by a police officer during a 2012 traffic stop in Highland Park. Ahmaud Arbery and Trayvon Martin were killed by white citizens.

Portraits of the mothers frame the back wall of the exhibit, accompanied by plaques that describe the hobbies and interests of their children. An augmented reality app, EyeJack, can be used to reveal images of the sons overlayed onto the picture frames.

Alongside the portraits is a historical timeline of slavery, policing and civil rights efforts from the 1600s to modern day.

The exhibit also has an interactive feature in which visitors can leave comments on pictures of the mothers and pictures taken during protests against systematic violence, as well as read the comments left by others. 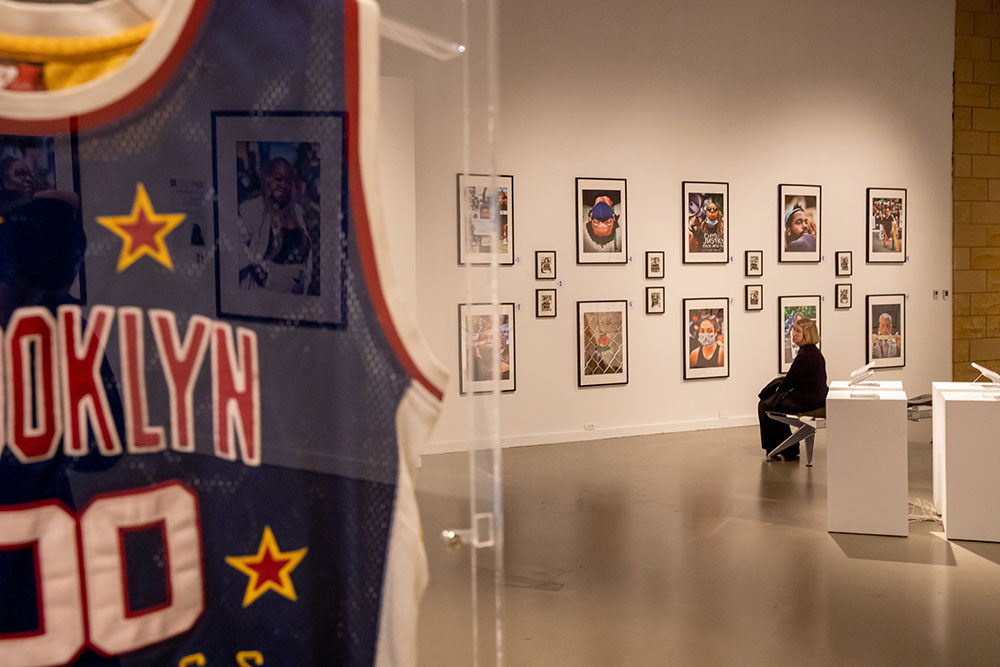 To create the exhibit, Alaquiva spoke with the mothers and created a wall of quotes about healing. Opposite the wall is a short film of Lezley McSpadden speaking about her healing process after losing her son, Michael Brown:

“I’ve only seen healing happening on the outside. You have a wound that’s all fleshy, and then over time it grows new skin. It gets thicker, and then it starts to itch ’cause it’s healing. I’ve never felt the itch from the inside, ’cause my heart is still bleeding,” she says.

Many of these deaths were the center of national media attention, such as Gwen Carr’s son Eric Garner, whose final words “I can’t breathe” became a rallying cry for the Black Lives Matter movement. She loaned his basketball jersey to be displayed in the middle of the exhibit.

Other artifacts include a poem about motherly love by Antwon Rose II, a 17-year-old who was fatally shot in East Pittsburgh by police in 2018; an Xbox controller belonging to Philando Castile; Michael Brown’s high school diploma; and Oscar Grant’s basketball trophy. 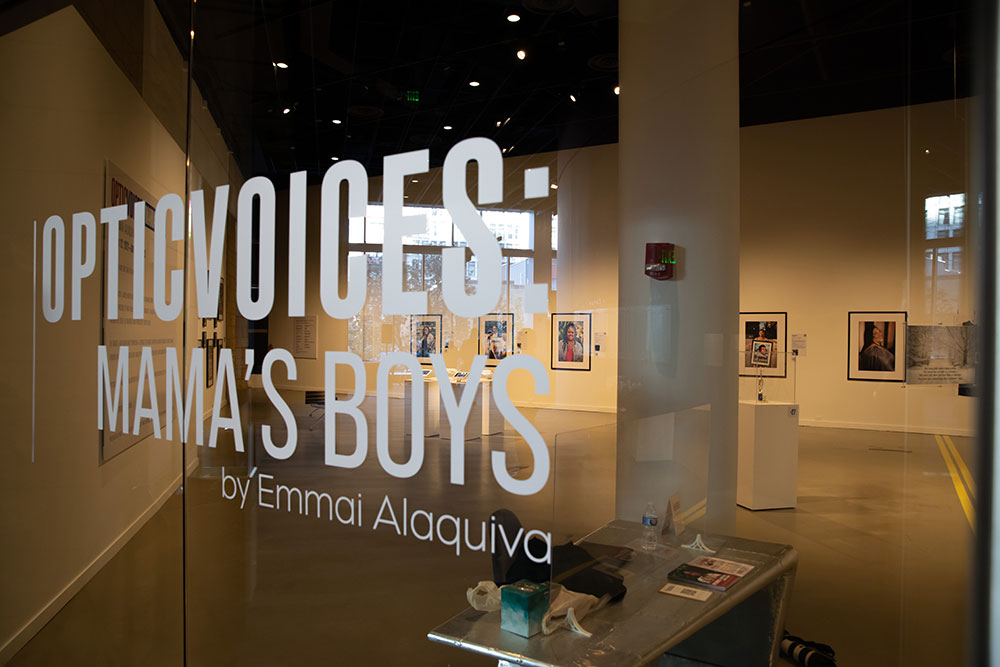 The exhibit also acknowledges the legacy of Mamie Till, the mother of Emmett Till, a 14-year-old boy who was brutally beaten and lynched in 1955 after being accused of whistling at a white woman. Mamie Till, the subject of the recently released feature film “Till,” chose to hold an open-casket funeral for her son to show the brutality of racism and lynching.

First Lady of Pittsburgh Michelle Gainey attended the exhibit’s opening in October and says that the message is particularly important to her as a mother of a young Black son.

“I hope [the exhibit] reaches every mom, and every young boy and every young girl, so that we are all focusing on being more intentional to prepare our children to go out into this world to live and to thrive,” she says.

Alaquiva says that the work is not about the violence Black men and children face, it’s about the healing that these 10 mothers have done after losing their sons.

“What I’m trying to communicate with this work is the importance in the process of healing, and how important it is for us all to do so, and using the inspiration and the power and impact of mothers … and using them as the catalyst to inspire the rest of the world, because if they could start the healing process, I think the rest of the world can.”

This article appears in the December 2022 issue of Pittsburgh Magazine.
Categories: Arts & Entertainment, From the Magazine