Spotlight: Heart and Sole — Plus Heels 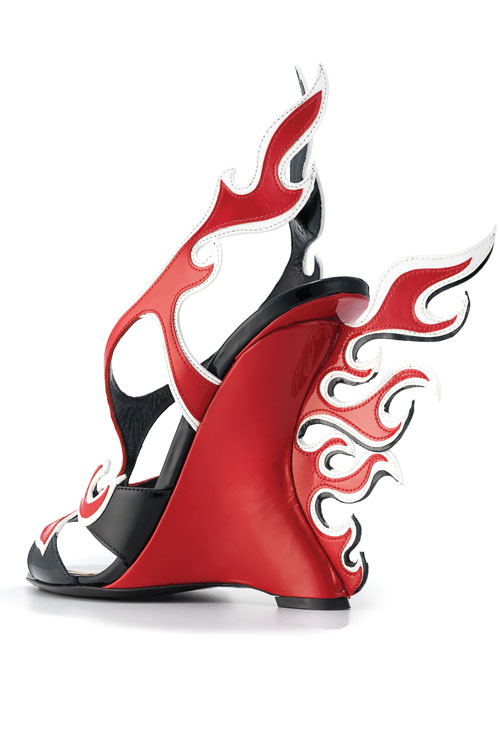 Men, I may not know; but shoes, shoes, I know."
—Carrie Bradshaw, "Sex and the City"

I’m a man. Shoes, I don’t know. But shoes, shoes; I know women know shoes. Love ’em. Passionately. Women have tried to explain to me that mysterious female fascination for footwear and heels. (Even the iconic doll Barbie had feet molded for heels.) And I’ve heard Carrie describe it, but I still don’t quite “get” it.

Nevertheless, I’m still open to learning, and I raised my couturial IQ for “Killer Heels: The Art of the High-Heeled Shoe,” the fashion-forward (but also retro) summer show at the Frick Art Museum. Pittsburgh is the last stop on a nationwide tour originating at the Brooklyn Museum and organized by its curator of exhibitions, Lisa Small. It’s also the first of three fashion-focused shows — a new venture — the Frick is planning.

“It speaks to the many stories we tell here at the Frick: about taste, style, aesthetics and society,” says Frick director Robin Nicholson.

Drawing from the show catalogue for perspective, he explains: “High-heeled shoes, with their often astonishing design, have been status symbols for centuries: coveted, adored, reviled, regulated, mocked and legislated against; towering high heels are presented here in all their glory…”

We can find the track marks for heels starting in the distant past and follow them over continents, cultures and time. The timeline in “Killer Heels” travels from the 18th century to the present, comprising 150 historic and contemporary high heels organized into six thematic sections: “Revival and Reinterpretation,” “Rising in the East,” “Glamour and Fetish,” “Architecture,” “Metamorphosis” and “Space Walk.”

Although this show revolves around female footwear, male heel history is long and testosterone-intensive. The visually riveting catalogue at the Frick that accompanies the show tells us Greco-Roman actors favored heels, as did Uzbeki men for riding. High heels arrived in the West, it’s theorized, via footwear favored by Persian cavalrymen, introduced through trade in cities such as Venice. That’s also where adventurous women, not to be outdone, climbed onto shoes with nose-bleed-high 20-inch heels.

In art, we notice heels in Hyacinthe Rigaud’s portrait of Louis XIV, where the Sun King regally displays the red heels reserved for royalty beneath his tighty-whitey hosieried gams. After the French Revolution, mens’ heels went out of favor because of their association with the aristocracy, but they still reappear every so often: Think about some of the outrageous killer footwear sported by glam rockers David Bowie and Elton John.

Outrageous might also be a way of looking at some of the coolest creations in “Killer Heels,” which are culled from Bata Shoe Museum in Toronto, the Costume Institute at New York’s Metropolitan Museum of Art and design houses from around the planet. Brands include Balenciaga, Manolo Blahnik, Chanel, Jean Paul Gaultier, Christian Louboutin, Alexander McQueen and Prada.

A few highlights: How about a skyscraper-stiletto leather-and-metal design by architect Rem Koolhaas created for Lady Gaga and the launch of her perfume, Fame? (Don’t miss the little gold men exploring this fashion-forward sculpture.) Or there’s a silk-and-embroidery homage to fashionista Marie Antoinette by Christian Louboutin, with an image of the tragic French queen and a gravity-defying coif crowned by a miniature French frigate.

Other notable sights, with heels in lower altitude ranges, include Beth Levine’s Kabuki shoes, which belonged to Gloria Swanson, and Ferragamo sandals and slingbacks once part of actress Ruth Gordon’s collection.

Augmenting the show are six heel-inspired or -related video productions by contemporary artists and works on paper. Head (or foot) over to the Grable Visitor Center for a Pittsburgh tie-in.

“I think most of our regular visitors are aware we have a clothing collection,” says Sarah Hall, the Frick’s director of curatorial affairs. But maybe not footwear. Look for samples of shoes worn by Mrs. Henry Clay Frick and her daughter Helen on display. Although conservative dressers, the Frick women acquired footwear with “fabulous details,” Hall notes, including “embroidery, rhinestone-studded buckles and rosettes.” Moreover, “There are lovely boudoir slippers with gold heels that remind me of Turkish slippers in the exhibition,” she says.

Want to get more up close and personal? A Frick first is the Killer Heels Shoe Sponsorship program (killerheelsfrick.org/shoe-sponsorship), which lets you “adopt” something in the show. Describing her own relationship with shoes and heels as “complicated,” Hall admits to a “certain no-nonsense straightforwardness” that has resulted in her sometimes eschewing heels. “On the other hand,” she adds, “there is a strange magic to a high-heeled shoe; you quite literally get a different perspective on the world.”