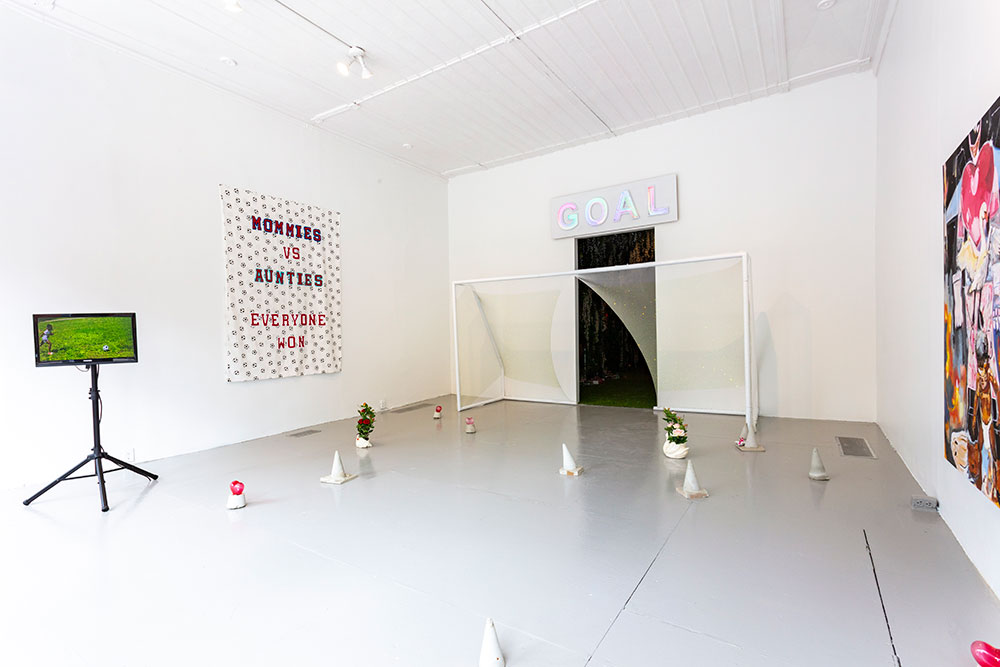 At “SHRINE,” the six-installation exhibit in the Mattress Factory’s Annex Gallery, you’ll exit the first space through a soccer goalpost — part of a work by local painter and assemblage artist Naomi Chambers — to find yourself in the middle of a lush underground sanctuary crafted by visual artist sarah huny young. 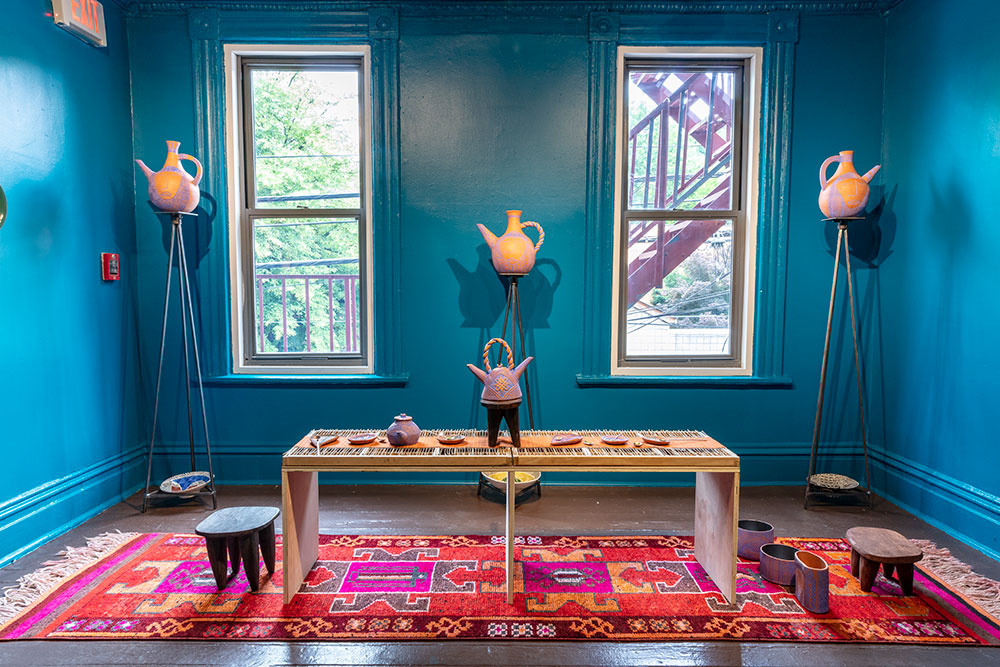 “A CONSTANT STRUGGLE FOR RECIPROCITY” BY MARY MARTIN.

The six pieces, both individually and together, speak to the power of the collective behind the exhibition: Sibyls Shrine.

Sibyls Shrine was created in 2019 by Wormsley, Jessica Gaynelle Moss, who curated “SHRINE,” Chambers and the Office for Public Art. The Pittsburgh-based arts collective and residency program is “rooted in the radical care, rest and support for Black women, womxn, trans women and femmes who are m/others and identify as artists, creatives and/or activists.”

The collective was an answer to many problems facing the artists it today represents — whether that be funding, a space to create, child care or simply support. And the resulting exhibit is a perfect culmination of the work that’s been done so far.

“To execute something like that specifically in Pittsburgh, which has been determined to be the worst city in the country to be a Black woman, in this city at this time is I think really, really important,” says young. “To be able to do that in Pittsburgh right now and deliver that to people and particularly Black women and femmes in the city is just very, very powerful.”

The Mattress Factory was the perfect home for the exhibit, says young, who admits showing her work there has long been on her bucket list. 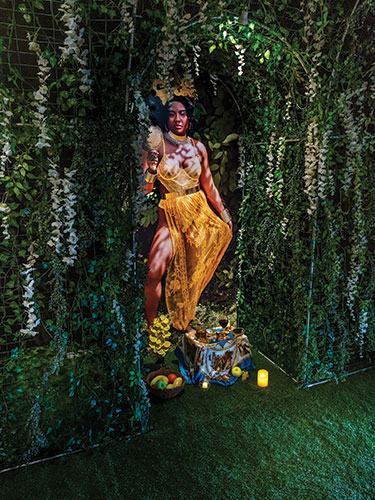 Her installation, “7” depicts six larger-than-life goddesses tied into motherhood, fertility, vengeance and rage, each in their own garden enclave. The number seven, which is symbolic in numerology and multiple cultures and religions, “ultimately stands for every Black woman who steps in this space,” according to young.

“You complete this reverent compilation,” the installation’s description reads. “You are the final, the infinite, the omega. There aren’t six goddesses, there are seven, and the 7th is you.”

“I’m very proud to be able to put these women in a museum,” says young. “That has been my goal, for years, for years, to put people that look like me, people that don’t typically see themselves reflected in these kinds of revered art spaces, to put them there, to depict us as works of art.

“And this is the first time that I’ve actually been given the space, given the trust, given the opportunity, given the money to be able to do something like that.”

Cox was the first artist to fill the visiting resident role, one of four residencies Sibyls Shrine offers. She says it was a wonderful opportunity to push her own boundaries.

Her work in “SHRINE,” “Soul Culture,” is an interdisciplinary piece of projection mapping developed with support from SoulRounded, an international team of Carnegie Mellon University graduate students she worked with over 14 weeks. Digitally manipulated portraits that display self-similar patterns dance above and beside and under you in an immersive experience.

The residency also allowed Cox and all residents to explore local institutions including the Pittsburgh Glass Center and Silver Eye Center for Photography.

“It was a great experience,” Cox says. “It’s really good to bring in as many mothers as you possibly can, and I got to speak to a lot of them and sort of mentor them to a certain extent. [I want people] to have a great feeling of well-being and knowing that they’re not alone and that you can be a mother and you can continue your career and do it at the highest level as well.

“I think some of the, let’s say, prejudice or judgment that might exist in the art world pertaining to women, in general, can be alleviated, some of it, obviously, stone by stone, brick by brick. So I think this show functions in that way for any naysayers who are out there.” 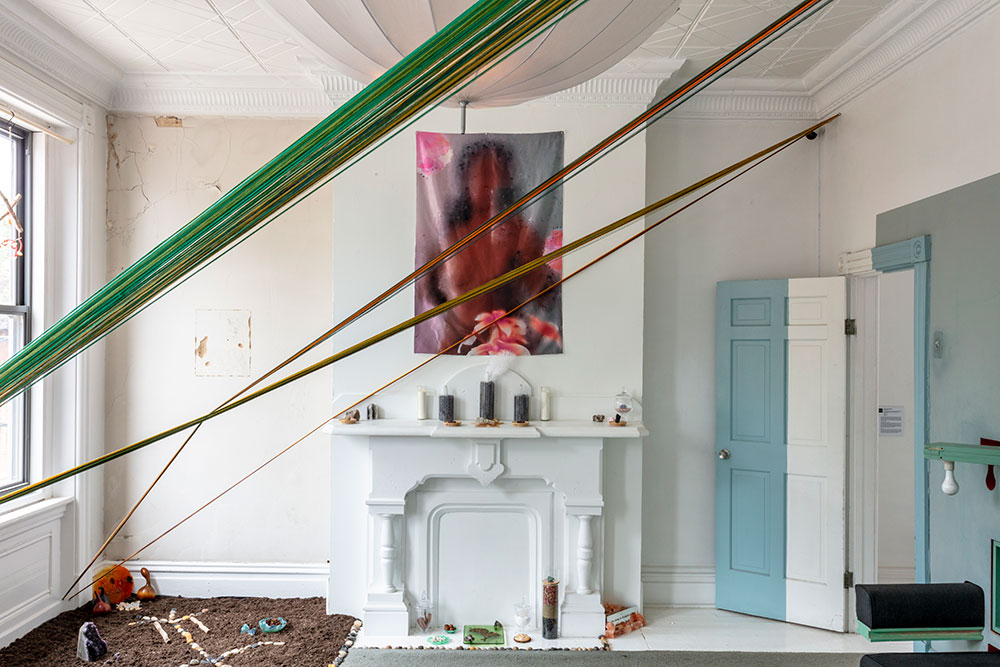 “HOW DEEP IS YOUR LOVE” BY LAKEISHA WOLF.

This article appears in the November 2022 issue of Pittsburgh Magazine.
Categories: Arts & Entertainment, From the Magazine