Spotlight: Birds of a Feather

A cross-pollination between BoxHeart Expressions and Phipps Conservatory blooms into “Emergent Patterns,” a nature-centered hat trick of a show featuring three female artists. 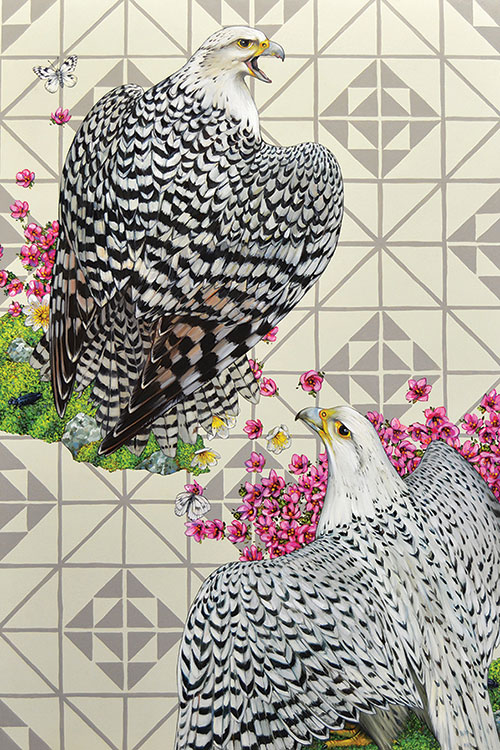 There’s no partridge in a pear tree. And forget the turtledoves, French hens, geese and swans that made the cut for the “Twelve Days of Christmas.”

But if you’re game for augmenting and re-energizing that traditional (and oh-so-repetitious) holiday song, how about kingfishers, grey falcons or hummingbirds? Perhaps that’s what the artists in “Emergent Patterns” — a twofer venture hatched by BoxHeart Expressions and Phipps Conservatory and Botanical Gardens — had in mind. It’s unlikely, but this being the holiday season, it easily could be imagined (at least by me).

“My inspiration always comes from the artists,” Capozzi says. “I pay attention to them, to the stories they tell with their art and build exhibitions around exactly that.”

In 2015, Capozzi juried art for a publication and discovered Deirdre Murphy (and her talents). Through a circuitous yet serendipitous path, with connections leading to Phipps Conservatory along the way, she came upon the work of the other two artists.

All had noteworthy resumes and backgrounds with connections to Earth-friendly organizations and efforts. Each had a unique vision through which to explore our relationship to nature, yet an underlying synchronicity emerged. When bringing them together as a group for the first time, Capozzi detected a pattern: “A special meaning is derived from the artists’ combined efforts,” she says. “The process of bringing them together for this exhibition unfolded organically.” 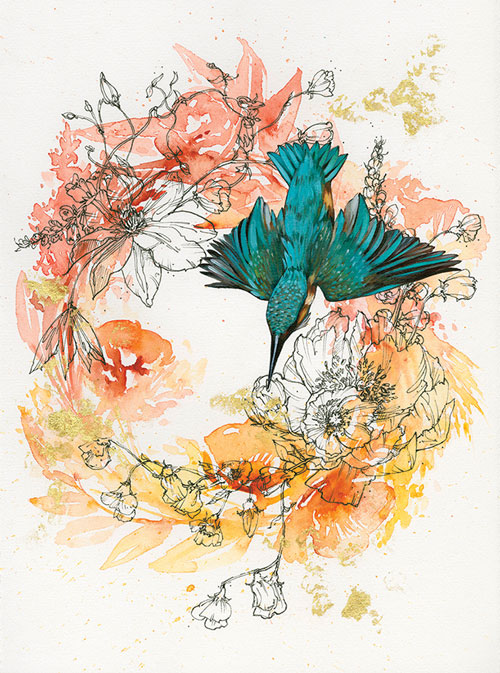 Pittsburgh-based Cecil (born in 1981) juxtaposes detailed examples of flora and fauna with graphic patterns recalling Victorian textiles.
Among her sources of inspiration, Philadelphia-based Murphy (born in 1967) has been fascinated by the collective intelligence of bird flocks. That can be translated into abstract shapes.

Op-art and mandalas reverberate in the paintings of Buffalo-based Droze (born in 1981) with arrangements and magnification of birds, fish and insects. Her work also confronts the spectacle of death and our desire to control nature.

The question arises whether the choice of three female artists is coincidental or an emergent pattern itself.

“I have an intentional bias in an attempt to level the playing field for women artists exhibiting with my gallery,” Capozzi says. “In the context of this exhibition, I wanted to spotlight how these artists are using their field and their form of expression to address diverse views of our world.”

In addition to being a salute to Mother Nature, an examination of our relationship to her and a call for conservation, “Emergent Patterns” also has been positioned to coincide with the centennial of the Migratory Bird Treaty Act.

This visionary legislative effort made it illegal for anyone to possess or sell a migratory bird without the proper permit. Spearheaded by the United States, it remains a testament to international cooperation. It also laid a foundation for avian conservation and management and acknowledged the ecological and social importance of birds. (Anyone see a dodo or passenger pigeon lately?)

The curators of “Emergent Pattern” emphasize how bonding with nature and also enriching and giving back with beauty and color always have been a mission of the visual arts. In a statement, the curatorial trio declares that to be not only a part of the past and present but also the future:

“Artists collect data and interpret the information in order to depict their vision of a future world. Any particular political issue does not necessarily motivate them, but rather an artistic exploration into how modernization has shaped how we think about and experience our environment — both personally and commonly.”

As conservationist, “Silent Spring” author and Springdale native Rachel Carson once observed: “Those who dwell among the beauties and mysteries of the earth are never alone or weary of life.”

With “Emergent Patterns,” she might see her emergent vision take flight again.

Speaking of nature: While visiting the Phipps component of the show, in the Center for Sustainable Landscapes, don’t miss the annual Winter Flower Show and Light Garden, which runs through Jan. 8.