History seems to repeat itself in this look at Jewish refugees and immigrants in Pittsburgh. 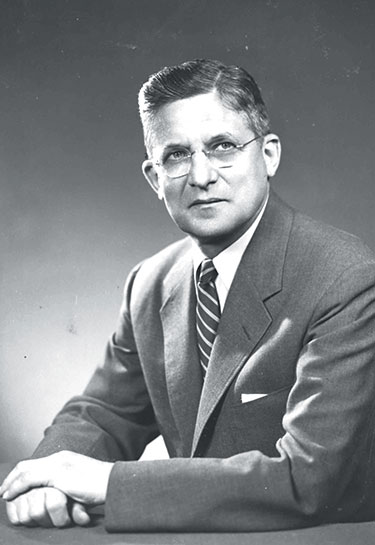 David Glick was a Pittsburgh-area lawyer who was instrumental in getting 90,000 Jewish refugees out of Nazi Germany |PHOTO COURTESY RAUH JEWISH ARCHIVE

It’s eerie how the newspaper clippings Jackie Reese has been reading for research for a new exhibit at the Holocaust Center of Pittsburgh could almost be straight out of today’s news.

“You’ve got one person saying, ‘These people contributed to our society and we’re a nation of immigrants and it certainly can’t hurt to have them come,’” Reese says. “And in the same paper it’s like, ‘I hear all these bad things about Hitler, but Hitler puts Germany first, and I’d like to see an American politician put America first.’

“It’s all the same stuff we hear now.”

The exhibit “For You Were Strangers: Jewish Immigration to Pittsburgh, 1880-1990,” which debuts Feb. 9 at the Holocaust Center, shows those attitudes were not unique to the Holocaust. The exhibit is a comprehensive look at Jewish immigrants and refugees in Pittsburgh’s history.

“Anti-Semitism did not start or end with the Holocaust,” says Reese, the Holocaust Center’s marketing and education associate. “There were refugees that came because of the Holocaust, but before that, there were several waves that came … We’re focusing on all these other things.”

One of the women featured in the exhibit is Zena Saul, who came to Pittsburgh from Poland in 1920 and was a welcoming presence and advocate for incoming refugees.

“She worked tirelessly for them,” Reese says. “When she died, she had a caseload of like 400 people. So many people referred to her as an angel.”

“That’s the funny thing. When you’re doing this research, a lot of the same names come up over and over because it’s Pittsburgh,” Reese says. “Pittsburgh is just a microcosm always, but in this case, I think it’s a great case study for the larger story.”

Similar to the United States Holocaust Memorial Museum in Washington, D.C., visitors to the exhibition will be given a card with the name of an immigrant or refugee on it. At the end of their visit, they’ll find out what happened to the real person, whether they were allowed into America and became a part of the Pittsburgh community or if they were turned away and what became of them.

Reese says it’s discouraging to see the cycle of xenophobia, but she hopes an exhibition such as this can help to educate people.

“You can see all these arguments people had were kind of nullified because people were actually really successful and really did meaningful things in the community, so think about all the amazing things that refugees can do now that maybe we’re missing out on because people are being so insular,” she says.

In 1910, 90% of Pittsburgh’s Jewish population lived in the  Hill District.

Restrictive immigration laws enacted in 1924 prevented most refugees from Nazi Germany from entering the United States between 1933 and 1939.

This article appears in the February 2020 issue of Pittsburgh Magazine.
Categories: Community Feature, From the Magazine