Matt Hostetter takes to the world stage in auctioneering and sings his way to the top. 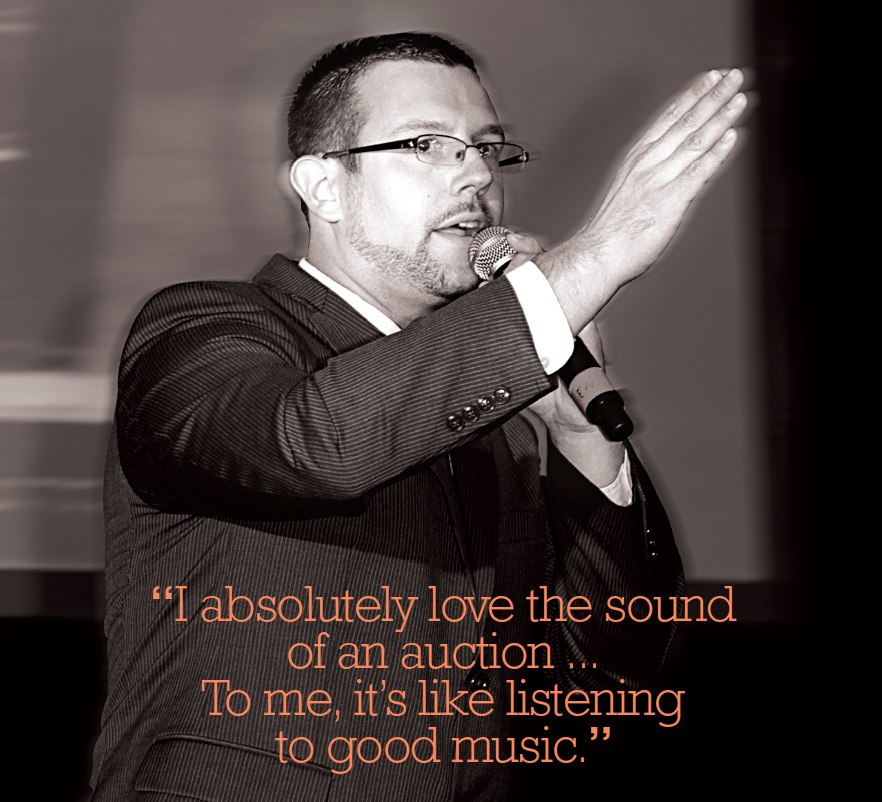 Believe it or not, auctioneers are actually uttering words in the midst of that steady stream of bids, and there’s quite the skill to knowing how to make those words sing. An auctioneer’s “base chant” can be “I am bid five; would you bid 10?” But more advanced chants with extra fillers, such as “I want” or “now,” and plenty of intonation are used by auctioneers of Matt Hostetter’s caliber. The Beaver Falls native placed in the Top 10 at the International Auctioneers Competition, held in July in Indianapolis; he was one of 15 chosen out of 101 for the final round before finishing ninth overall.

“To be a good bid caller is [to make] your words sound like sounds,” says Hostetter, 29. “If you can make it into more of a rhythm, more of a song, then you’re going to have a better auctioneering chant … that is what people like to hear.”

In addition to being one of the lead auctioneers at Sherman Hostetter Auctioneers in Beaver Falls, he contracts with international companies to auction heavy equipment, traveling overseas monthly to such places as Ireland, Germany, Spain and the Philippines. The American auctioning technique is often more singsong and fast-paced — and more sought-after for its appeal to bidders — than that employed by auctioneers from other cultures.

SHA does all types of auctions, from business liquidation to fundraisers to real estate. Hostetter took time to talk — at a normal speed — with Pittsburgh Magazine about his life as an auctioneer.

Your grandfather started the family business in 1955. Your father took over in 1996. Did you always want to be an auctioneer?
Yes. I [was] born and raised around it my whole life … My sisters and cousins are all in the business … It’s a family tradition, so I’m proud and grateful and blessed my grandfather and dad have given me an opportunity to further the company business. I was proud to be the Pennsylvania Bid Calling Champion. [Editor’s note: He won the state title this year.] My dad won it in 1992. We’re the first father-son team to ever win it. I’d want to pass down the business to my kids, too, if they would be interested.

How does one win an auction competition? What’s the criteria?
Essentially, you get on stage in front of a panel of auctioneers (through the National Auctioneers Association). They judge on appearance, stage presence, clarity, overall demeanor, how well you’re pitching an item and if you’re engaging the crowd.

Then there’s another round?
There’s an interview process if you make the finals. They ask you three questions in front of 1,000 auctioneers [who] do it for a living. They judge you on the content of your answers, also how you answer, your composure [and] your mannerisms.

What’s a Hostetter family dinner like?
[Laughs] People [ask] that all the time: “Is it like, ‘Pass-me-the-ketchup-right-now?’” It’s normal. But we do talk a lot about the business.

You attended the Reppert School of Auctioneering in Indiana for two weeks in the summer when you were 15. What do you do at auctioneer school?
They teach you how to auction — and really, anybody can auction. But they also teach you about the business. When most people think of an auctioneer, they think of talking real fast, but there’s the whole business end, too … Now, I teach at [Reppert].

What’s the weirdest item you’ve ever auctioned?
We came across a hand grenade once in Pittsburgh. We had to call the bomb squad. That was years ago. I once had to look at an auction for a funeral home. We went down into the basement, and they flicked a light on and there’s a dead body. They said, “Oops.” You never know what you’re going to see. … We just did a sale last year with 70,000 wigs at a wig manufacturing company. We’ve auctioned autographed baseballs by World Series [winning] Yankees. I’ve done fundraisers with Ben Roethlisberger and Mario Lemieux.

Do you enjoy just listening to an auction?
Truthfully, I absolutely love the sound of an auction — a good auction. I have CDs [made while on the road at others’ auctions or at competitions] of auctioneers I listen to in my car. To me, it’s like listening to good music. My wife hates riding with me. [Smiles] Not only do I like it, but I also use it to learn.

You need to learn the backgrounds for such a wide range of items. Do you feel you know more than the next person?
I hope not. [Laughs] I have probably a good general knowledge of most items but not specific. If someone wanted me to auction off a painting, I wouldn’t know anything about it offhand. But for vehicles or houses, I can give you a range for how something’s going to do. But you never know what’s going to happen. That’s what’s so alluring about an auction. A few years ago, I had three appraisals done on a house, and it went for $1 million more than the highest appraisal. At an auction, anything can happen.