A local group is using music and some spare change to help charities — and filming every step of the way. 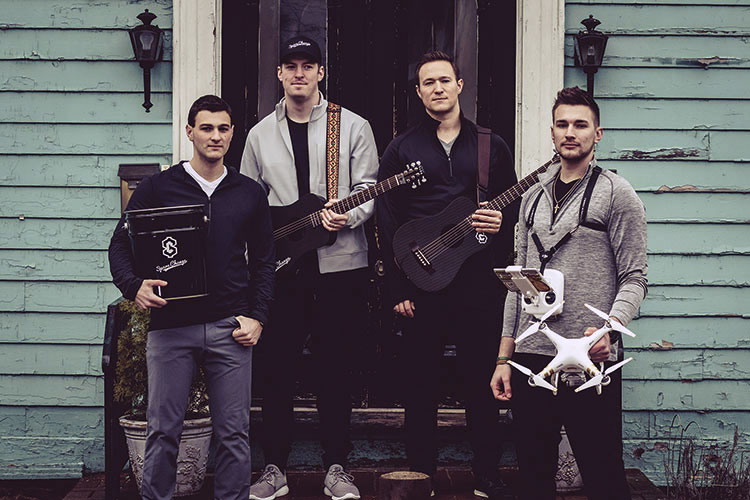 In March 2017, a group won an Awesome Pittsburgh grant and did something unprecedented: They shared a portion of their $1,000 winnings with the other finalists.

Since then, Spare Change has continued the spirit of sharing the wealth, partnering with musicians, businesses and nonprofits around the region — and beyond — and proving that a little bit of money from a lot of people can make a big impact.

“We’re using music to unite businesses in support of charity,” says group founder Josh Corcoran. “Central to this idea is it can be as simple as donating some spare change and just trying to do something positive in the lives of others.”

It all started in February 2017 when Corcoran, a singer/guitarist, and drummer Pete Peters were playing an open mic night on the South Side. Afterward, they headed out into an unusually warm night and decided to busk for fun. A homeless man came by and asked for some money; they gave him everything passersby had thrown into their guitar case.

“His reaction kind of led us to want to see: What can we do with spare change?” says Corcoran. “The very next night, we went out and did it again.”

Just before filming the third episode, where they ran into a group of girls raising money for The Education Partnership, a Pittsburgh nonprofit that provides school supplies to underserved students, the group applied for an Awesome Pittsburgh grant. In the fourth episode, they donated money to several groups and began traveling to other towns to partner with specific causes. Their 11th and most recent episode has more than 69,000 views.

Music is central to their mission; it’s how they got their start and how they are expanding their reach. For their first episode of 2018, which will debut this month, the group will travel to Barn Sanctuary, an animal haven in Michigan, owned by a friend of musician Bryce Vine.

“We had a good relationship with the artist,” Corcoran says. “Bryce let us use his music but also said reach out to my best friend Dan [McKernan] who has a nonprofit Barn Sanctuary.”

Spare Change will film their episode at the nonprofit and partner with a business that will donate to Barn Sanctuary in the form of a sponsorship, a development to the Spare Change model they started around the 8th episode. The group typically works out an agreement with the nonprofit to divide some of the money from fundraising to cover production costs.

“What we’re trying to do is [tell sponsors], rather than spend money on marketing, reallocate those dollars and make a donation to our featured charity,” Corcoran says. “You’ll get the same level of exposure, but instead of using money for marketing you’ll be making a contribution to a worthy cause. And of course the benefit to them is they’re able to get tax deductible contributions.”

Most of the money Spare Change has raised has come from those sponsorships, but they also encourage small donations like those that gave them their start; they use Spotfund for “crowdgiving,” which allows users to donate as little as $1. Corcoran says it’s like asking people to “throw a dollar into a digital guitar case.”

“I’m excited about this year, having all of this in place and seeing what cool things we can do with it,” Corcoran says.

Spare Change inspired another group to donate its winnings from Awesome Pittsburgh, which was founded in 2011 and awards a $1,000 grant nearly every month to an idea that’s tangible, useful or just plain awesome.

“It’s really what we always hope to see with Awesome Pittsburgh grants,” he says. “We want to see people experiment with new ideas and try new things. It’s OK if not all of them turn into something, but it’s really exciting when they do.”

This article appears in the April 2018 issue of Pittsburgh Magazine.
Categories: Give Pgh