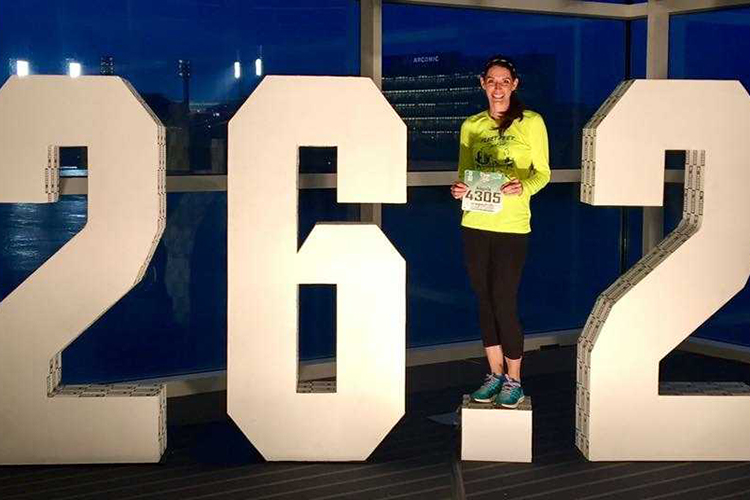 A year after starting to run seriously, Angela was constantly feeling pain in her left knee. Sometimes it was mild, and sometimes it was enough to sideline her. She would take over-the-counter anti-inflammatory medications, ice it, rest it, and tried stretching, yoga, and rolling, but the pain would always come back.

To figure out the root of the problem, Angela visited the Allegheny Health Network Sports Complex at Cool Springs. Certified athletic trainer and strength and conditioning coach Frank Velasquez and physical therapist Tara Stempfer evaluated Angela and started her on a 6-week rehabilitation program designed to strengthen and align the soft tissue around her knee.

Part of her therapy took place on an anti-gravity treadmill, a device developed by NASA that supports a percentage of an athlete’s body weight to reduce stress on the leg. This allowed Angela to continue running during rehab and to correct her running form, both of which prepared her to be a healthier, faster runner.

“My knee feels good now. I know that I need to follow my plan from AHN Sports Performance for rolling, stretching and strength training to ensure I stay healthy and running injury free. I ran the Pittsburgh Marathon last year, and I am currently training for the Pittsburgh Half Marathon in May and the Midnight Run in Reykjavik, Iceland, in June.

This article appears in the February 2018 issue of Pittsburgh Magazine.