Stacy Hurt became separated from her luggage on a flight from Nashville to Pittsburgh. Inside her bag were items that she depended on during chemotherapy. Luckily, an angel named Sarah came to the rescue. 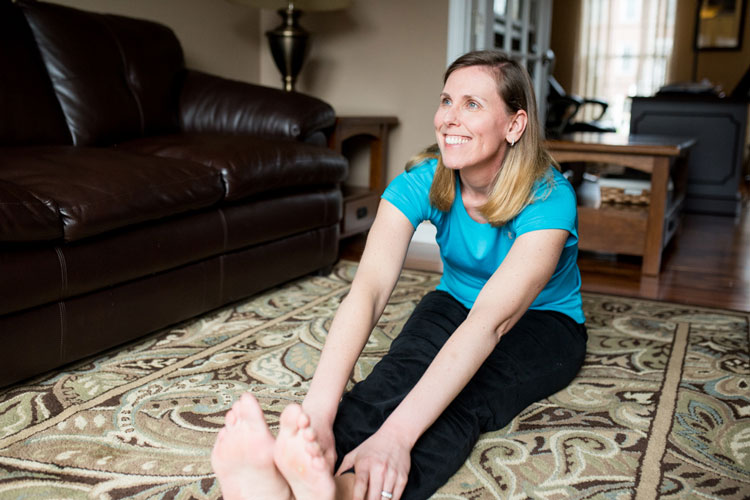 From endless delays to overbooked flights to shrinking legroom, airlines are the punching bag of customer service complaints. This is not one of those stories.

On July 23, a Southwest Airlines jet delivered Stacy Hurt from Nashville to Pittsburgh. Her luggage was another matter. Because she had switched to a direct flight at the last minute, she and her bags did not travel together, and inside her suitcase was something much more important than clothes and toiletries.

Stacy is a Stage 4 colon cancer survivor, and her luggage contained medication and personal items she needed for a chemotherapy appointment the next day.

“The medications were replaceable but there were comfort items in there that are personal to me. Some are good luck charms. People who have undergone chemo know what I'm talking about.” she says.

Hurt has undergone 51 rounds of chemotherapy since her diagnosis three years ago. During that time, she became an advocate for others facing similar challenges.

Hurt called Southwest and on the other end of the line was Sarah at Pittsburgh International. She quickly realized that Sarah would make good on her promise to get her and the wayward luggage reunited in time.

“I could really sense the sincerity and compassion in her voice. I knew she was going to come through for me, for some reason we made a connection.

The luggage eventually arrived at 2:30 a.m., after the last of the airline's couriers had left for the night. Undeterred, Sarah tossed the bag in her car and drove it more than 20 miles to Hurt's home in South Fayette. Rather than wake anyone up, she left the luggage on the porch with a note attached. 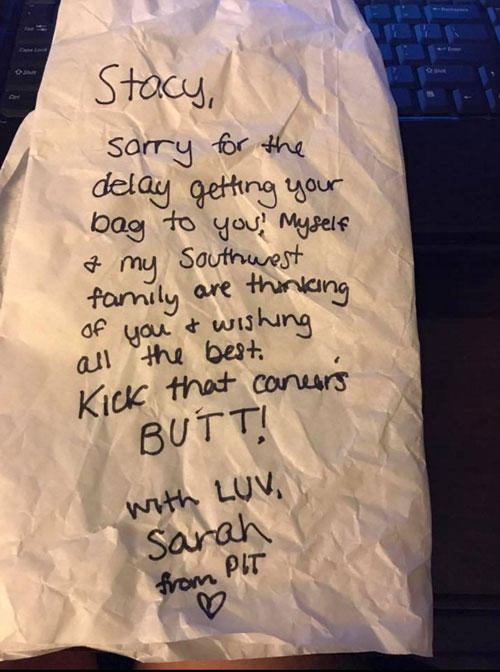 “Sorry for the delay getting your bag to you, ” the note read. “Myself and my Southwest family are thinking of you and wishing all the best. Kick that cancer's BUTT. with LUV, Sarah from PIT.”

Hurt posted the picture of the note on her Facebook page and recounted the story ending the post with: “She put this note in my suitcase- when I read it, I cried- Sarah, I don't know you, but THANK YOU! You give new meaning to the words "exceptional customer service."

Hurt also reached out to Southwest Airlines to make sure they knew what Sarah had done.

“Goodness breeds goodness,” Hurt says, her voice breaking. “She deserves a raise, a free trip somewhere, something special. Things happen for a reason. I'm crying with hope. This kind of thing restores your faith in humanity.”

While the two have yet to meet in person –– “I want to hug her” Hurt says –– Sarah did send a text message after hearing from her boss at Southwest.

“I started crying when my manager called today. You touched MY heart with your patience, understanding, and bravery. I'm glad I could make you smile during a difficult time. Been thinking of you ever since and sending all the positive thoughts I can! Thank you for being one of the reasons I love my job and company ❤,” she wrote.

There was one other item in her luggage; a T-shirt she'd picked up at the colon cancer conference she'd attended in Nashville. It reads "Where there is no struggle, there is no strength."