South Side Park Has Got Your Goat(s) This Weekend

The Allegheny GoatScape Herd will return to the Pittsburgh park for the Second Annual Goat Fest on Saturday. 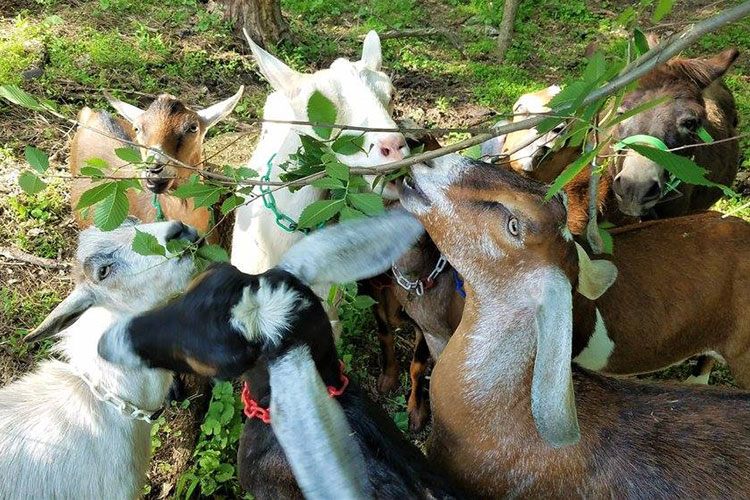 Watching landscaping on a Saturday afternoon doesn’t sound like a lot of fun — but it can be when the workers have four legs, fluffy tails and scruffy little beards.

The second annual Goat Fest at South Side Park is bringing the locally famous Allegheny GoatScape Herd back to munch on pesky invasive plants from 12 p.m. to 4 p.m. Saturday, rain or shine.

The herd visited South Side Park in July 2017 to clear out unwanted and overgrown vegetation in an area popularly known as Jurassic Valley —  about a thousand people flocked to the park to see the professional nibblers in action.

The nonprofit that owns the goats, Allegheny GoatScape, formed in January 2017 with a mission to reduce unwanted vegetation in public spaces and vacant lots by bringing in the hungry herd to eat them. It partners with organizations, businesses and landowners that allow the herd to dine on their overgrown properties. The goats have munched on 15 areas around the city so far, including Brighton Heights Park and the Great Allegheny Passage.

According to Allegheny GoatScape, using goats to clear vegetation is beneficial because it removes the need to use harmful land management products such as herbicides. Goats also do not require fuel like machines do —  they get their energy from the plants they eat. The animals also can reach places humans and machines cannot, work long hours and leave the soil they pluck plants from more nutrient-rich than they found it.

There currently are 15 goats in the herd, made up of a mix of breeds including Nigerian dwarf and Nubian and sporting names such as Angel Face, Oreo and Wimpy. They are often accompanied by a “cantankerous” mule named Hobo for protection.

The festival will also feature food trucks and live music at The Bandi Schaum Community Garden and a craft vendor market on the Paved Loop Trail. Representatives from the Department of City Planning will be on hand to discuss the South Side Park Master Plan, which details improvements planned for the park in coming years.