At Victory Pointe Arcade and Gaming Cafe, decades of video game history are waiting for you (and some friends). 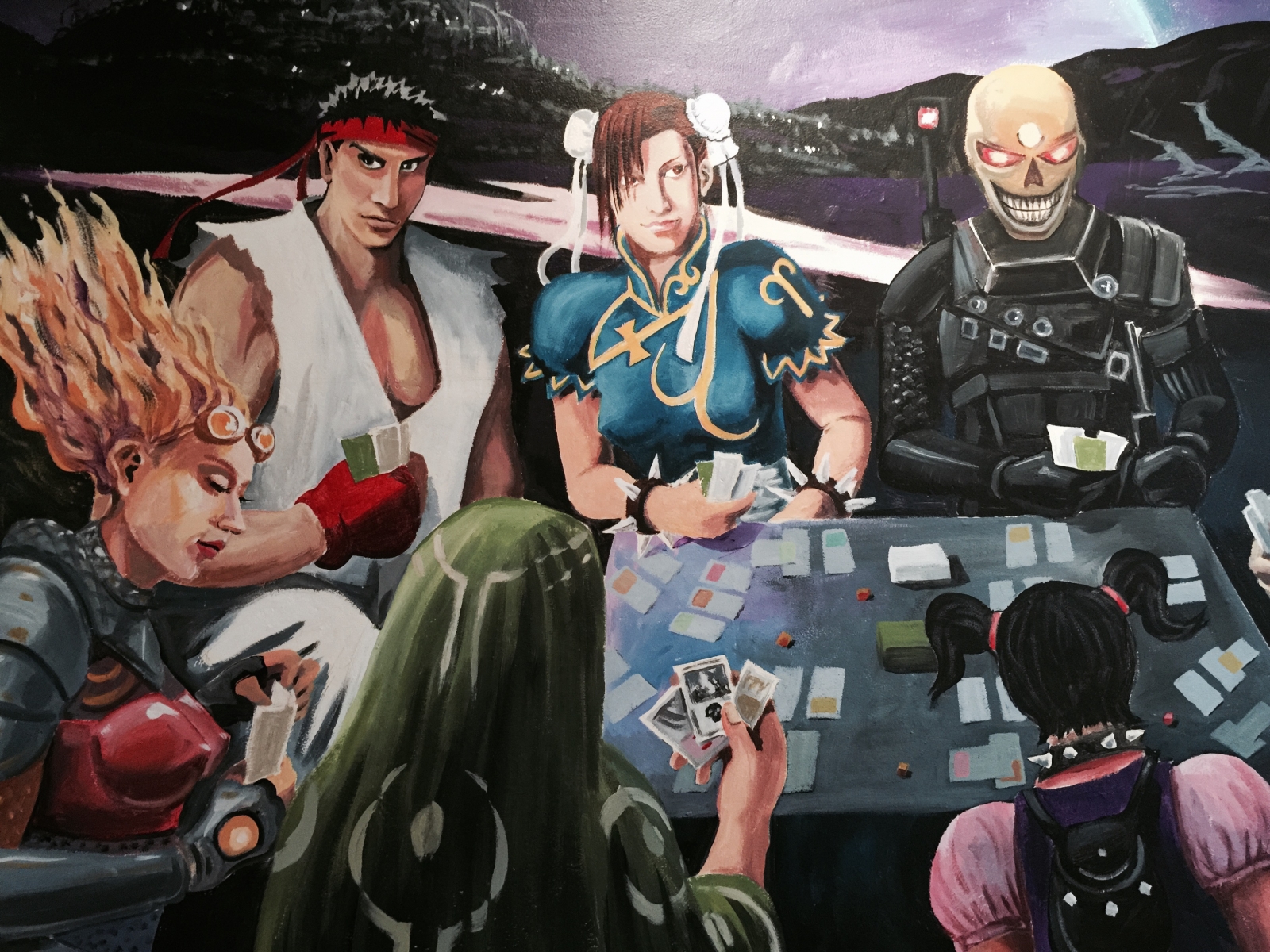 ABOVE: MURAL ON THE SECOND FLOOR OF VICTORY POINTE ARCADE, BY JOHN FISHER

When I think of the first few months of my college years, I don’t recall classes. I’m sure I attended a handful (at least occasionally), and if I worked at it for a while, I might be able to name a few of them. I don’t really remember the parties too well, either. I can sort of picture the layout of my first dorm room, but only because it was laughably small.

Those early weeks out of the house make me think of Playland.

A sprawling arcade in the center of College Ave., just across the street from the Penn State campus, Playland opened in 1968 with a handful of coin-operated amusements; video arcade games weren’t even available yet. As early as its second year in business, Playland expanded to student-friendly hours, keeping the games beeping each night until 4 a.m. Decades of students played pinball — then Pong, then Pac-Man, then Street Fighter — in its admittedly dark and smoky confines.

That fall semester of 2003, I was there nearly every day. I can remember putting on a backpack and heading to class, only to abruptly change course and go to Playland.

And then, in December of that year, Playland closed. It had stood for 35 years; it was there when my parents were at Penn State. And about four months after I finally got to it, it was no more.

(To add insult to injury, I got the flu on the day of the closing auction. Believe me, I would still have a Playland arcade cabinet in my house today if I had been feeling better that morning.)

My story isn’t unique; most of us who grew up with video games went through a similar grieving process as their favorite arcade faced a final “Game Over.” The days of omnipresent mall arcades coincided with an era when at-home game consoles weren’t yet de rigeur (and hit its peak decades before the pinnacle of online and mobile gaming).

While many still think of video games as a solo endeavor, though, the arcade boom of the late ’80s and early ’90s speaks to the inherently social nature of gaming; while single-player campaigns may be the high water mark of games as an artform, people have always sought ways to play games together, whether that’s at a dusty mall arcade or via an XBox One connected to the internet.

Thankfully, that social aspect is revived at Victory Pointe Arcade and Gaming Cafe, a new, multi-story game hall on East Carson Street. After some delays related to permitting, Victory Pointe officially opened its doors to the public in September.

Downstairs, games ranging from vintage Pac-Man and Punch Out! cabinets to brand-new Mario Kart and Alien titles crowd the room opposite a long counter that serves bar-food staples with gamer-friendly names (the Harvest Moon Burger, named for the series of farming-themed role playing games, boasts “farm fresh” onions, peppers and mushrooms, for example). They also have a selection of coffee creations and milkshakes; you’re free to bring beer along, too, for a minimal fee.

The second floor of Victory Pointe elevates the business beyond the realm of a bygone arcade, however. For $5/hour or $10/day, you can access just about any game console you can name, from the 8-bit Nintendo Entertainment System through the Playstation 4; simply select the game you’d like to play from an exhaustive menu and settle in.

It’s a concept that’ll take some time to resonate with customers, I think; while I’m in the habit of dropping a few quarters into a game machine, the idea of going to the South Side to revisit some Super Nintendo favorites seems initially unusual. But that’s where the social aspect comes in; rather than another night at the bar, grab three friends and head to Victory Pointe for an endless series of Goldeneye deathmatches. That’s something I can get behind. (More of a board game fan? There’s a large library of those, too, and ample table space.)

When I’m at home playing XBox, I’m usually content to work through a game solo, at a leisurely pace. When I was at Victory Pointe bashing my way through the early-’90s Simpsons arcade game, however, I found myself wishing that I had three friends — or, in true arcade fashion, quarter-bearing strangers — to join in the fight. Next time, I’ll come with a posse and a six-pack.

I still miss Playland, but this place will do just fine.