When she’s not fronting local rockers Fist Fight in the Parking Lot, Abby Krizner is manning the booth at 105.9 The X. We caught up with Krizner to ask her about her musical roots and metal ambitions. 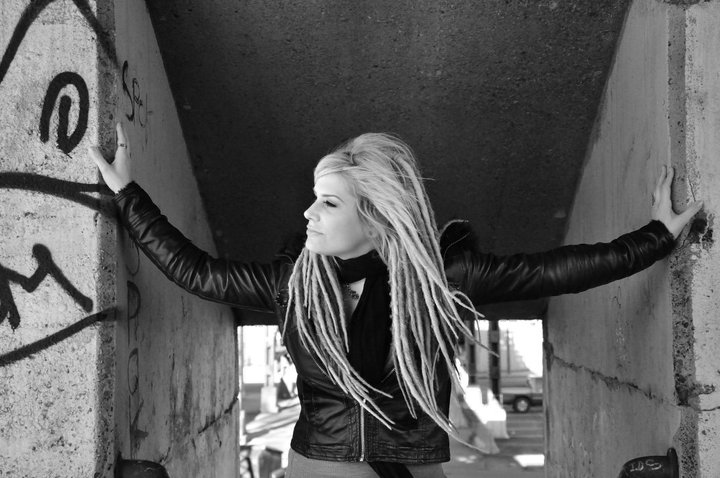 Who was your favorite musician growing up?
The first musician that captivated me was Elton John — specifically the first time I heard Goodbye Yellow Brick Road. The combination of such visual lyrics from Bernie Taupin and musically whimsical yet totally rocking songs was all I needed to decide I wanted to take up piano around age five.

What was the first concert or show you attended?
My parents took me to see Elton John’s dueling piano tour with Billy Joel. I think I was about eight or nine years old, but all I can really remember is my Dad trying to shield me from the more adult activities going on around me! I wonder if they regretted that decision at the time.

Do you have a stage superstition or ritual?
I used to bring these “lucky” sticks of honey [to help my throat] — until they exploded one night on my pedal board. Now I just go for a good ol’ fashioned shot of whiskey and I’m ready to go!

What is your favorite part about being on stage?
Musicians are in such a vulnerable place when writing; it’s this opportunity to expose who you are and hopefully dig deep and find something that surprises you. When you’re on stage, you’re really taking ownership of that vulnerability — so when an audience is into a show or tells you they love a specific song, it’s such a genuine validation and invigorating feeling.

If you could own any guitar in the world, what would it be and what would it look like?
A friend of mine, Jim Buckels, surprised me a few years ago with a one-of-a-kind Explorer that he created for me from beginning to end. He kept it with a wood grain finish, but added a zombie character on the body with skulls and bones in the inlays…every decision he made was perfect for me.

Of all the venues in Pittsburgh, which is your favorite and why?
At the 31st Street Pub, you get a sense of the history; the ceilings are covered with signed cymbals and stickers from bands that visited. The best part: They don't care if you like them or not; they are what they are, take it or leave it…and I love it!

What is your favorite part about the Pittsburgh music scene today?
I’ve never seen as many blogs, websites, or online zines as I do today — and they’re all assembled with passion to connect bands and let the scene thrive. I’m also noticing that bands are putting together more eclectic shows. I love when I get to see unexpected bands on a bill that might not necessarily go together on the surface. It’s a great time to be in a band in Pittsburgh, and I’m lucky to be a part of it.

That question about Abby’s favorite venue in Pittsburgh got us thinking. We decided to check in with a few more local favorites to get their picks.

“There's nothing like a crowd down at Heinz Field. Whether it’s hyping a crowd ready for game day, or an event in the stadium — there’s just an aura that screams Pittsburgh when you’re there.”
— DJ Bonics (A.K.A. Brandon Glova), Wiz Khalifa’s Official DJ/Kiss 96.1, djbonics.com

“Pittsburgh does an outstanding job at organizing summer, outdoor concerts. My favorite is the outdoor stage at Station Square — it's a great opportunity to attract new, young fans that don't always make it out to clubs.”
— Adam Sivitz, Drummer/Percussionist/Songwriter, adamsivitz.com

“I gravitate toward rooms like Squirrel Hill’s Christine Fréchard Gallery and Shadyside’s Pittsburgh Center for the Arts – unconventional spaces and places that feel "warm." I feel like I get to know my audience better when I can see them.”
— Joy Ike, Singer/Songwriter, joyike.com

“My favorite venue at the moment is Thunderbird Cafe in Lawrenceville.  There's great sound, always a fun crowd, and seats in the upper balcony so your mom and dad can come see the rock show!”
— Josh Verbanets, Meeting of Important People, meetingofimportantpeople.com

This article appears in the February 2013 issue of Pittsburgh Magazine.
Categories: Arts & Entertainment