Songs of Steel for a Summer in Pittsburgh

Love PGH Music Month has formed just in time for a summer filled with great shows. 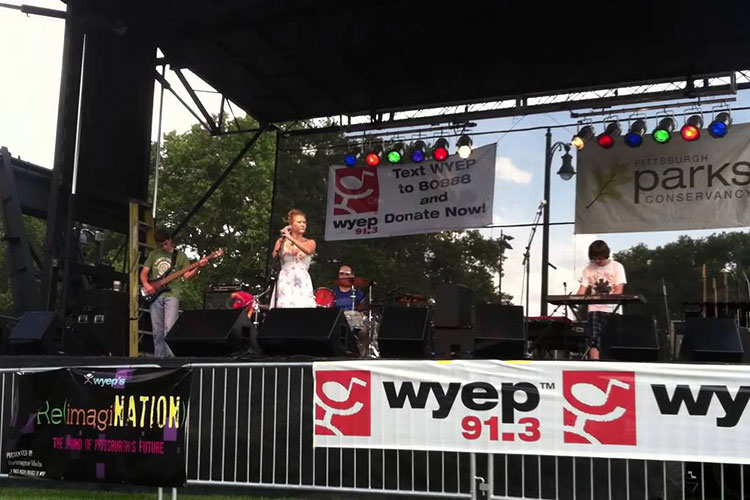 There is no question that Pittsburgh is a music town. From its vibrant and vital jazz history to the Grammy-winning Pittsburgh Symphony Orchestra to the pop sensation Christina Aguilera, there has always been something to rub Pittsburgh audiences the right way.

But even with a large and diverse number of artists, the Pittsburgh music scene can sometimes feel either obscured by larger touring acts or inaccessible to fans trying to discover a new local sound. The question, then, becomes not, “Is Pittsburgh a music town?,” but, “How can we make sure that everyone can access all the great music this town has to offer?”

That question is central to the Love PGH Music Month campaign. The campaign, spearheaded by a committee of local arts professionals and nonprofits, designated July as a month-long celebration of all things local music. The goal is to get eager audiences in front of local musicians they could fall in love with and create a sense of civic pride for Pittsburgh-area music.

“We just want to grow that audience so that everyone in the music scene can flourish,” says former WYEP General Manager Abby Goldstein, one of the campaign’s organizers. “It all starts with audience.”

Love PGH Music Month bloomed from recommendations from the Pittsburgh Music Ecosystem Study, an extensive report on the state of the local scene released last year. Funded by The Heinz Endowments and the Henry L. Hillman Foundation and led by the City of Pittsburgh, the Pittsburgh Downtown Partnership and WYEP, the study used interviews, town halls and surveys to identify the strengths, weaknesses and areas of opportunity for the region. And one of the biggest opportunities identified was audience development.

Taking those recommendations, the Love PGH Music Month campaign branded July as a celebratory umbrella for all of the local acts playing around town. July was chosen because in addition to the usual music offerings — a long list of every type of music played in every type of venue, from small smokey dive bars to the sloping amphitheater of Hartwood Acres — there are a number of festivals centering around or featuring local musicians, including the Deutschtown Music Festival, Picklesburgh, Vine Rewind and Yinzfest.

The most visible part of the campaign is the website, a master calendar of local shows throughout the month. The planning committee worked with artists, venues and media outlets to get shows onto the schedule at lovepghmusic.com.

And while there are a number of events listings in local media outlets, including Pittsburgh Magazine (see my picks this month on page 113), the new website aims to be not only a comprehensive aggregate of shows with a focus on Pittsburgh-based artists but also a portal where the audience can engage with artists.

“We’re going to do everything we can to drive audience to that website,” Goldstein says. “And over time we’d like to build it out … give those bands a chance to put video content [and] playlists, so that when [visitors] comes to the site they can learn more.”

While this nascent month is a sort of proving ground for how the website and campaign will be used — and the community impacted — some local artists are ready to embrace the love and build off the excitement.

Christiane Leach, the Greater Pittsburgh Arts Council Artist Relations Manager and a member of the Love PGH Music Month committee, moved the release for her album, “The Pantry of Salt and Sugar,” (under her performance name Madame Dolores) to July in order to be part of the kickoff.

“Love PGH Music Month is a way for not just the city, but the whole western Pennsylvania region to celebrate and value the whole music ecosystem,” she says. “We are world class.”