Something Borrowed, Something Cherished

After the white doves have flown to the stars and the tablecloths are littered with petals and soaked with Champagne, many festive wedding objects are preserved in photos — while other items are cherished for years to come. 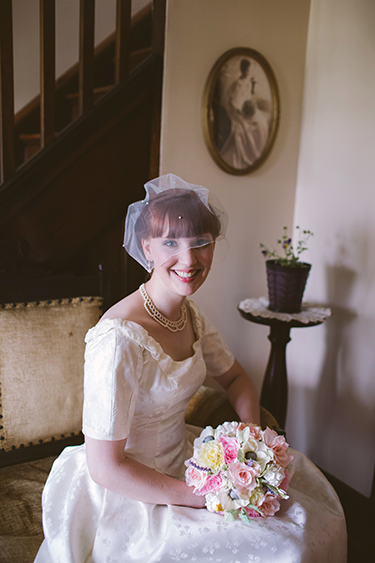 For as long as Sarah Henderson can remember, a photo from her parents’ wedding hung on the wall of their bedroom in her childhood home in Carnegie. After she decided to wear her mother’s gown for her June wedding, she says it seemed only natural to recreate the photo as well.

“It was almost a way to mark the end of my childhood in that home on the day that I left to form a new household,” says Sarah, 26.

Jonathan and Tiffany Cooper from Hot Metal Studio on the South Side recreated the photo — a picture of Sarah’s mother, Shari Henderson, sitting on an antique settee beside an end table in Sarah’s grandparents’ house.

Today, the furniture sits in the home of Sarah’s parents, where Sarah sat for her own photo.

“My parents’ marriage has always been an example of what hard work and faithful love can produce,” says Sarah, of Carnegie. “Sitting in the same place, wearing my mother’s dress — it felt like such a tribute to their love.”

Before Sarah and her husband, Rian Corcoran, 33, became engaged to marry, Shari invited her daughter to try on the wedding dress, just for fun.

“It slid over my head, and the skirt fell just to the floor. The back zipped right up in a perfectly magical moment. The dress fit as if it were made for me. We both had tears in our eyes and knew this dress was going to see another wedding day,” Sarah says.

The bride also wore her mother’s veil, which had been custom-made with hand-sewn pearls. Sarah and her mother repurposed the long, traditional piece into a birdcage style. 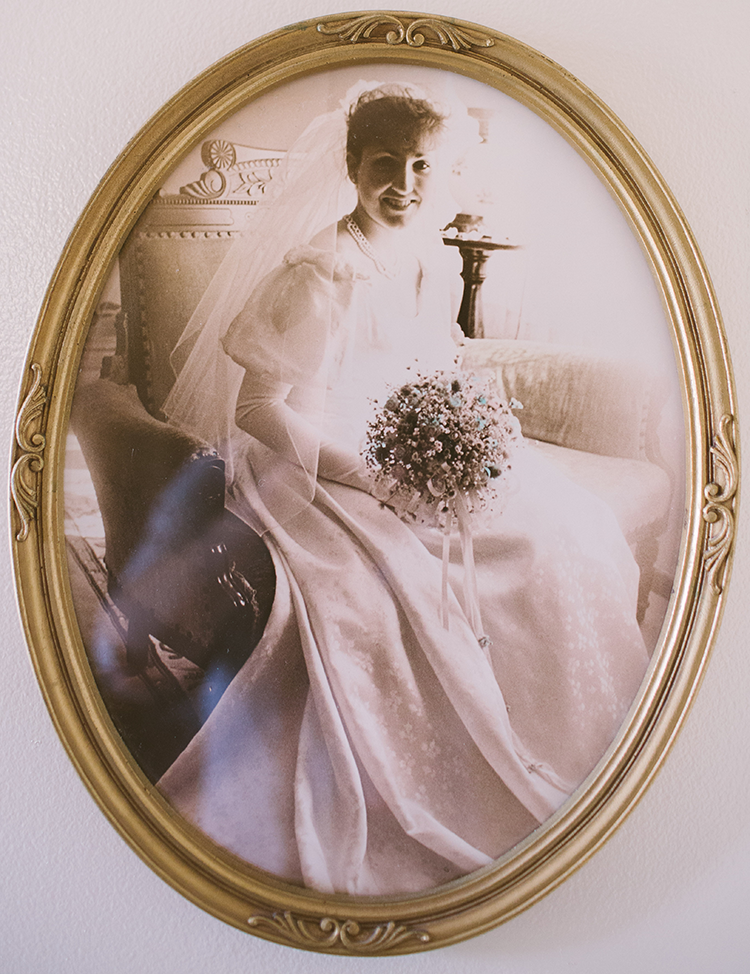 Sarah added another meaningful piece to her ensemble by having a pocket stitched into her wedding dress to hold a handkerchief that once belonged to her grandmother.

To pay tribute to Sarah’s maternal grandmother, who passed away in 2001, Rian proposed with her grandmother’s engagement ring.

“To see it all clean and bright on that special day was so memorable,” Sarah says. She now wears her grandmother’s wedding ring as well.

On June 27, 2014 — 27 years after her parents’ wedding — Sarah arrived at the altar prepared at Blinn’s Farm in New Brighton, conveyed there in her grandfather’s jet-black, 1956 Chevrolet Sport Sedan. 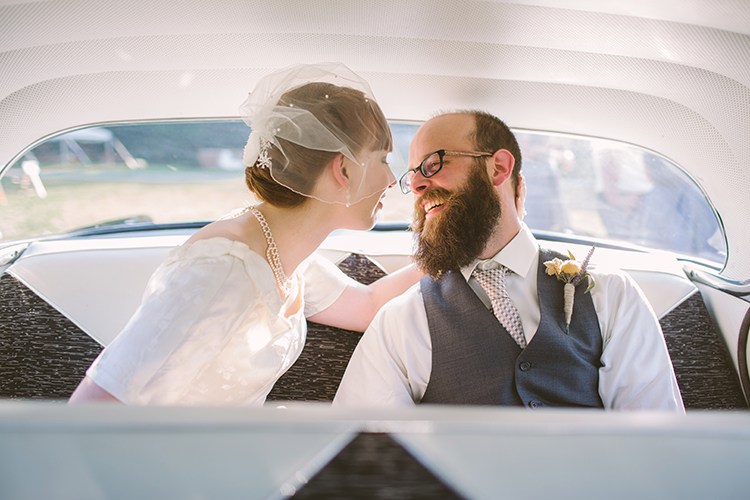 “My wedding day was perfect from the moment my eyes popped open,” Sarah says. “By the time I was dressed and ready, I felt so overwhelmed by the love of my family.” 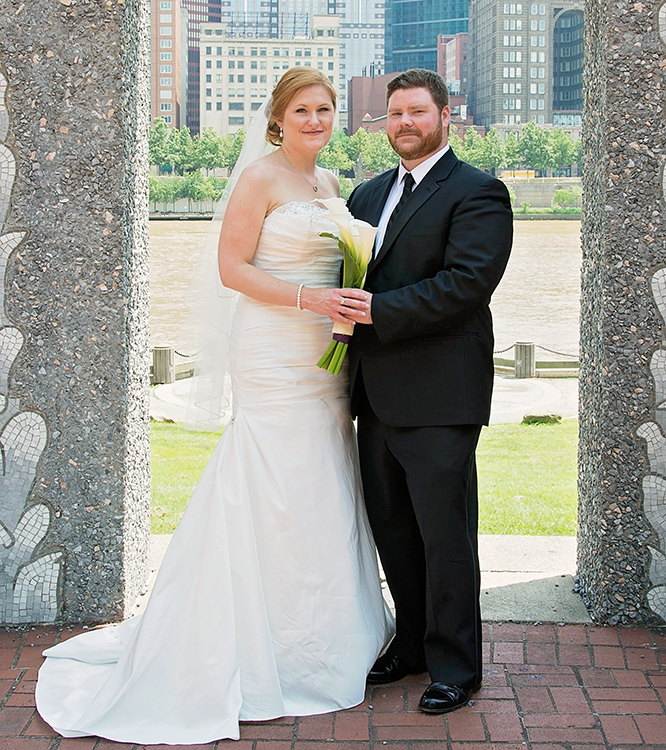 Objects often are tied in memory to the people responsible for the shape of our nose or the color of our eyes — the ones who placed us in “time-out” chairs, who sat with pride at our graduations, who lived the stories we strive to remember and left behind the things we treasure.

For Candace Brayfield, 33, the memory of her parents infuses the bouquet she carried down the aisle when marrying her husband, Mark Rhodes, 34, on June 28, 2014 at the New Hazlett Theater on the North Side. Her father died from a lung disease in 2008, and her mother died after a car accident in 2013. 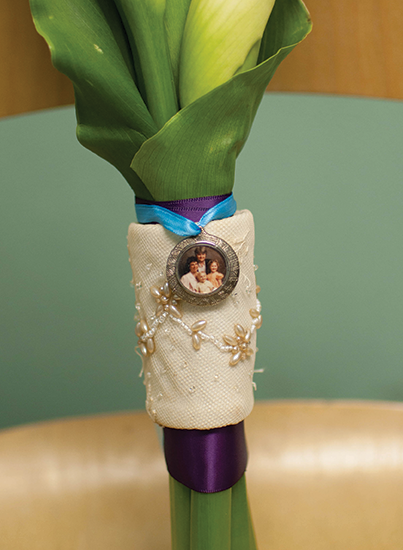 “I had a piece of my mother’s wedding gown wrapped around the stems of my bouquet — she had hand-beaded this part of her dress. I also had a pendant with my family picture tied around the bouquet with a blue ribbon — something blue — to honor my parents and try to make them there with us,” says Candace, who moved with Mark to Boston in 2011.

“The necklace that I wore for the wedding — and wear almost every day now — was my mom’s necklace. The pendant is made with the diamonds from my parents’ wedding rings. My mom had this pendant made when my dad passed away, so now it is mine. That’s actually how I felt I included my parents the most at our wedding.”

Candace’s “something old” was a handkerchief that belonged to Mark’s grandmother. It has been pinned into the wedding gowns of all of the women in the family.
In addition, Mark’s mother gave Candace a sixpence to place in her shoe to follow the old rhyme: “Something old, something new, something borrowed, something blue and a sixpence in your shoe.” 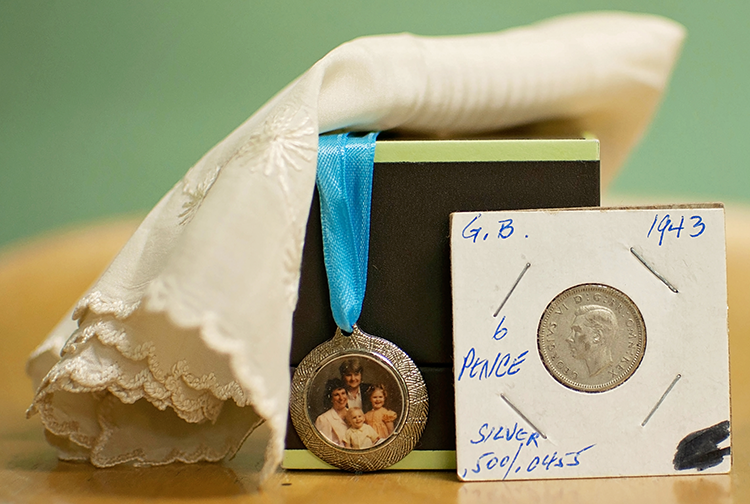 “She bought three sixpence coins a long time ago for each of her three children. I cried when she gave it to me, knowing she’s been holding on to this forever for her son’s future bride — that was me. I had that coin in my shoe during the ceremony,” Candace says. 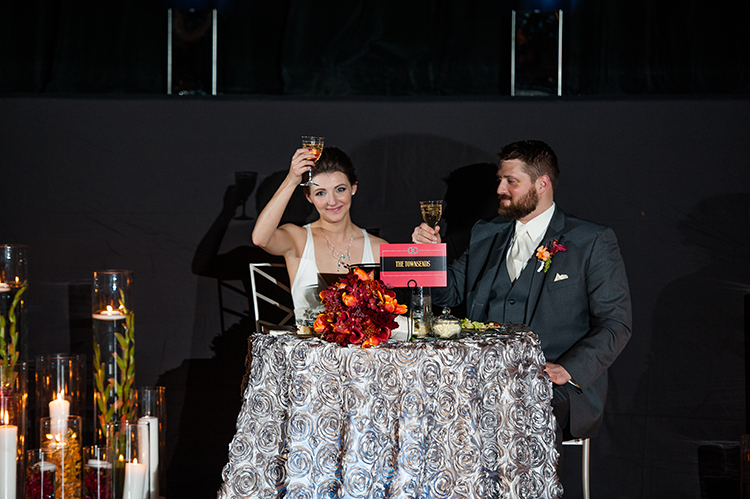 At some weddings, toasts are declared over beer bottles and hearty laughter; others are voiced over mascara-soaked handkerchiefs and flutes of Champagne or prosecco. For Keirstin Kuhlman’s family, the age-old tradition of the wedding toast includes a family heirloom.

On Feb. 22, 2014, Keirstin, 26, toasted her husband, Robert Townsend, 33, with an etched crystal glass brought over the sea from Ireland in her great-grandmother’s steamer trunk.

Tina Kuhlman, Keirstin’s mother, describes the romance of her grandparents, Loftus and Nellie Smith, as “very ‘Downton Abbey.’” The couple met while working for the Mellon family — Nellie as a maid and Loftus as the family’s chauffeur. The Mellons purchased Nellie’s wedding dress and even hosted the occasion on April 29, 1914.

Afterward, the couple moved into an apartment above the garage on the Mellon estate on Fifth Avenue. Nellie soon became pregnant, but she miscarried after falling while fleeing from a house fire. Her employer sent her home to Ireland to recover with the comfort of her family.

When Nellie regained her health, her mother gave her 12 crystal glasses as a wedding present. Nellie packed the glasses in a steamer trunk and traveled home to Pittsburgh to rejoin her husband. 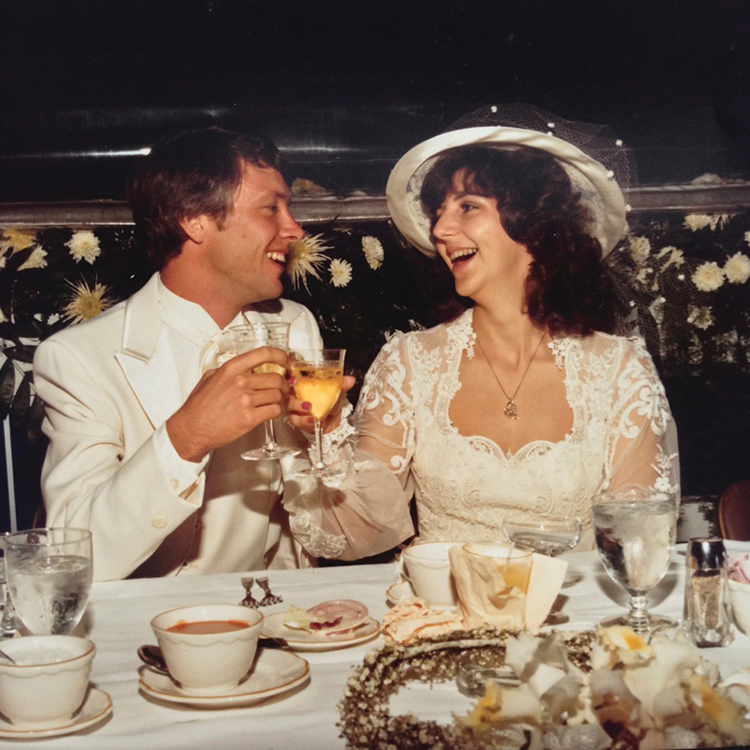 Tina, who toasted her husband on their wedding day with her grandmother’s crystal glasses, says she was 14 when she first saw some of the goblets stored in the same steamer trunk that accompanied her grandmother from Ireland. Ten of the glasses have been lost or broken over the years, but two remain in the family.

“I remember my gran telling me that she and my grandpa never drank out of them because they were much too precious to use,” Tina says. “How they went from 12 to two when no one ever used them is beyond me.”

The glasses circulate to family weddings all around the country and have been part of 15 celebrations through four generations.

“When we finally got to use the glasses, I felt very honored to be part of such a long and loving tradition,” says Keirstin, of Cranberry Township. “It made me feel happy to think in some way, my Nana was sharing in the moment with us. It was also very special to see all of my family members who have used the glasses at their weddings looking back at us with their spouses, wishing us luck in our marriage.” 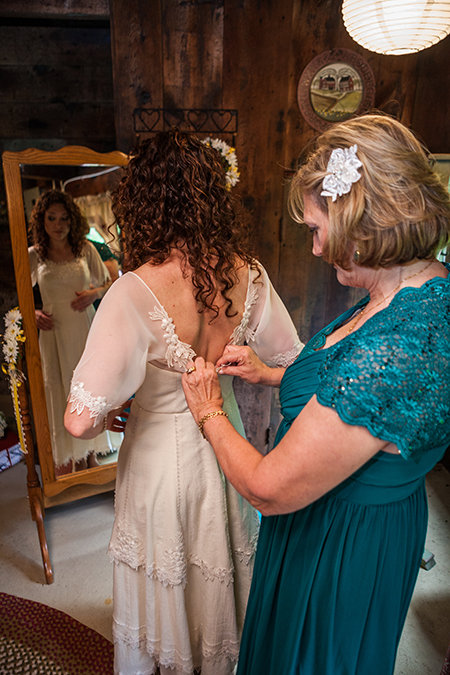 Jen Rocket is Pittsburgh’s fairy godmother, or rather, fairy godsister. The designer-seamstress owns a business in which she upcycles vintage garments for brides. Rocket is not intimidated by invention but thrives on the thought of turning something old into something new.

Sarah Ferry, 28, of Highland Park, is among the brides who have stood under Rocket’s magic wand. Sarah’s parents, Jack and Jennifer Ferry, have been married for 40 happy years, and she says it was important to her to capture their energy in the threads of her own wedding gown when she began planning to marry Greg Nicholas, 30.

“My dad said the dress worked perfectly once, so I should stick with it,” Sarah says. “They have such a wonderful marriage and friendship, [so] it would be hard to argue that point.”

Disenchanted by the dress options she found in traditional bridal shops, Sarah began to wonder about what might be done with her mother’s wedding gown. She came across Rocket’s website and contacted her in the hopes of gathering some ideas.

Sarah had fallen in love with the daisy pattern in the lace of her mother’s gown, and Rocket was able to recover the material and incorporate it into a new gown.

“Seeing it finished was just like seeing my imagination come to life,” Sarah says.

Thanks to Sarah’s father — the singer in doo-wop group Tom Slick and the Converted Thunderbolt Grease Slapper Band — the familial elements surrounding Sarah and Greg’s wedding did not end with the dress. 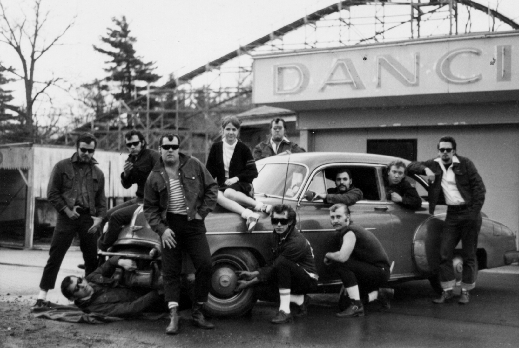 Sarah’s father, Jack, established the band in 1972 with a group of young men who sang in the glee club at King’s College — Jack’s alma mater. When Sarah’s parents married in 1975, the band played for guests at the wedding in Wilkes-Barre. Jack also sang “My Girl” to his new bride, Jennifer. Now when the band reunites, Jack sings the song to his wife, as he did on their wedding day. Guests also danced the polka, as was the custom in their community. 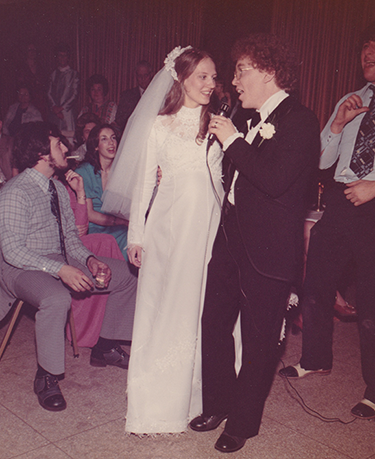 Sarah and Greg married on May 24, 2014, at Jack and Jennifer’s home in Marysville, Pa., near Harrisburg; their nuptials mirrored much of the older couple’s day. Tom Slick and the Converted Thunderbolt Grease Slapper Band surprised Sarah with a performance of “Kiss the Girl” from Disney’s “The Little Mermaid.” Instead of a father-daughter dance, Sarah and Jack sang a duet of “Come to My Garden/Lift Me Up,” from “The Secret Garden” musical. Once again, guests danced to polka music. 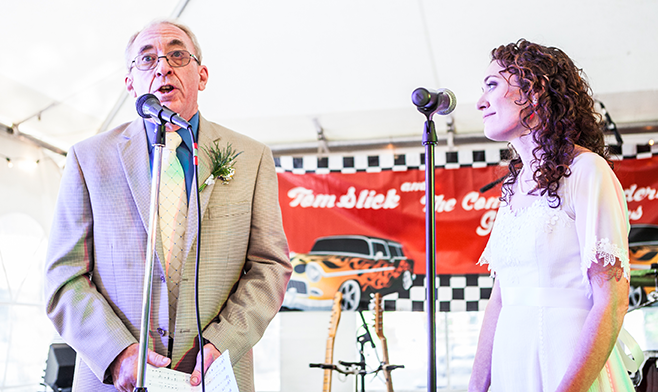 “Our families are just so amazing. Every single person had a piece in creating our wedding day, and it all came together to be bigger than we imagined,” Sarah says.

“I think that’s what makes family traditions so important and so meaningful on your wedding day. We weren’t alone up there getting married, and I’m so grateful for that.”

Georgia A. Templeton is a former editorial intern at Pittsburgh Magazine and is studying for a masters degree in journalism and mass communication at Point Park University.