Solving a Minor South Side Mystery

Somewhere on the Slopes, something paranormal has occurred. 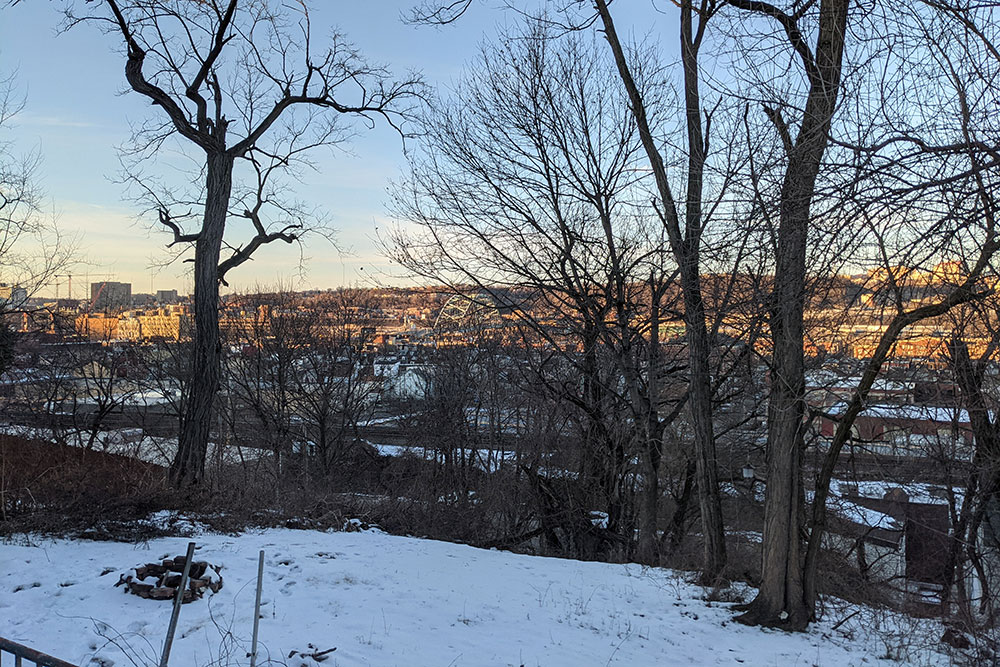 Someone was in my backyard.

This is uncommon, but not in and of itself shocking. It takes a bit of effort to get to my backyard, but it’s easily accessible between a few neighboring houses — and one of them is on the market right now, so finding footprints in the persistent snow back there would not ordinarily be perplexing.

Here’s where the mystery sets in: Those footprints are coming from the far side of the yard, where they appear suddenly near a nearly unclimbable hill. If you look at the photo, the line of snow isn’t just a small crest and beyond that lies a remarkably steep drop-off.

I live in the South Side Slopes, where every house is bordered on one or more sides by the kind of terrain only passable to seasoned climbers and the hardiest deer. Mine is one of innumerable nearby houses that is not, strictly speaking, located on a street. In short: It’s remote. The odds of anyone wandering through the backyard from the rough side are slim — and rendered infinitesimal by the snow and ice covering the already perilous hillside.

Even if I were to accept that someone was daring (or drunk) enough to try to climb the hill, that still doesn’t offer a full explanation. The footprints begin near the hill, but not at it; the trail, carefully preserved in the frozen ice, begins suddenly, as if someone were dropped onto the spot.

The solution is clear: There’s some “X-Files” stuff going on around here.

Before I get in touch with one of the numerous paranormal investigation associations or extraterrestrial enthusiasts in southwestern Pennsylvania (seriously, there are a lot of them), let’s try to reason this out. (Also, I ripped my jeans climbing over the railing to inspect the footprints. If I have to buy new pants, I’m at least getting a column out of it. Can I file the pants as a work expense? I’ll have to look into this.)

As I see it, there are four reasonable possibilities: The errant skydiver theory, the alternate universe/wormhole theory, the ghost theory and the U.F.O. theory.

I admit that I may have just used the word “reasonable” incorrectly, but let’s press on.

First, the most earthbound of my theories: The errant skydiver. Somewhere, a recreational daredevil leapt from a plane, only to be thrown dramatically off-course by the high winds we’ve been having. The amateur plummeter came to rest in my backyard, considered their options and then walked calmly to the street to seek help.

On the other hand, skydiving landings are rarely clean, slow descents to earth, like Charlie and Grandpa Joe burping their way to safety after stealing Willy Wonka’s Fizzy Lifting Drinks. These footprints are gentle — and there’s no discarded parachute to be found. (Also, who skydives in the dead of winter?)

So we must move on to the alternate universe/wormhole theory. The theory of infinite parallel planes of existence is too large — and somehow both boring and terrifying — to include here, but if you’ve ever read a Marvel comic book, you’re familiar with the idea that things might be playing out differently in a variety of mirror dimensions. (Not for nothing, but don’t try to use “You know, you and I are probably dating in a parallel universe” as a pick-up line. Trust me on this.)

Every third sci-fi movie involves someone flipping a switch and winding up on a different version of Earth; perhaps some battle-hardened protagonist fled calamity on their world by warping directly underneath my birdfeeder. I have very little proof for this theory, but I also don’t have anything that would disprove it, and this is the internet: Saying some stuff that can’t explicitly be disproven and acting like it’s reality represents the vast majority of web traffic.

Now, I’m fond — but skeptical — of the ghost theory. Plenty of spooky stories involve the appearance of eerie, surreptitious footprints, so I have no trouble believing that some form of spectre appeared in my backyard and left signs of its presence. It’s precisely the kind of thing I would do if I were a ghost.

I must admit, however, that I would take it further than that. This ghost had a perfect opportunity to stand on my back porch and get the dog to bark until we got sufficiently creeped out; why didn’t that happen? Was it just because the dog was asleep? (Knowing my dog: Yes.)

And finally, the U.F.O. theory. It’s straightforward as it can be: A recent abductee, having sufficiently been probed by an extraterrestrial race, was deposited back on Earth. The offending aliens probably didn’t care to get the spot exactly right, so the victim was likely a neighbor; when they figured they were near, but not at, their home, they walked to the street in a daze, struggling with their already-wiped memory.

When confronted with a lack of information, it’s often best to assume the simplest answer is correct — and the U.F.O. thing sounds right to me. It’s neat, it’s tidy, it requires no timid ghosts or parallel universe travel. Easy: The person in my backyard was placed there by an alien race.

Or — and this is the most outlandish theory — I’m looking at the footprints the wrong way, and someone just walked to the backyard from the front of the house, turned around and walked back in their own footprints.

But how likely is that? I’m going with the aliens.