Get all the info on the world-class musical acts headlining this month at Point State Park. 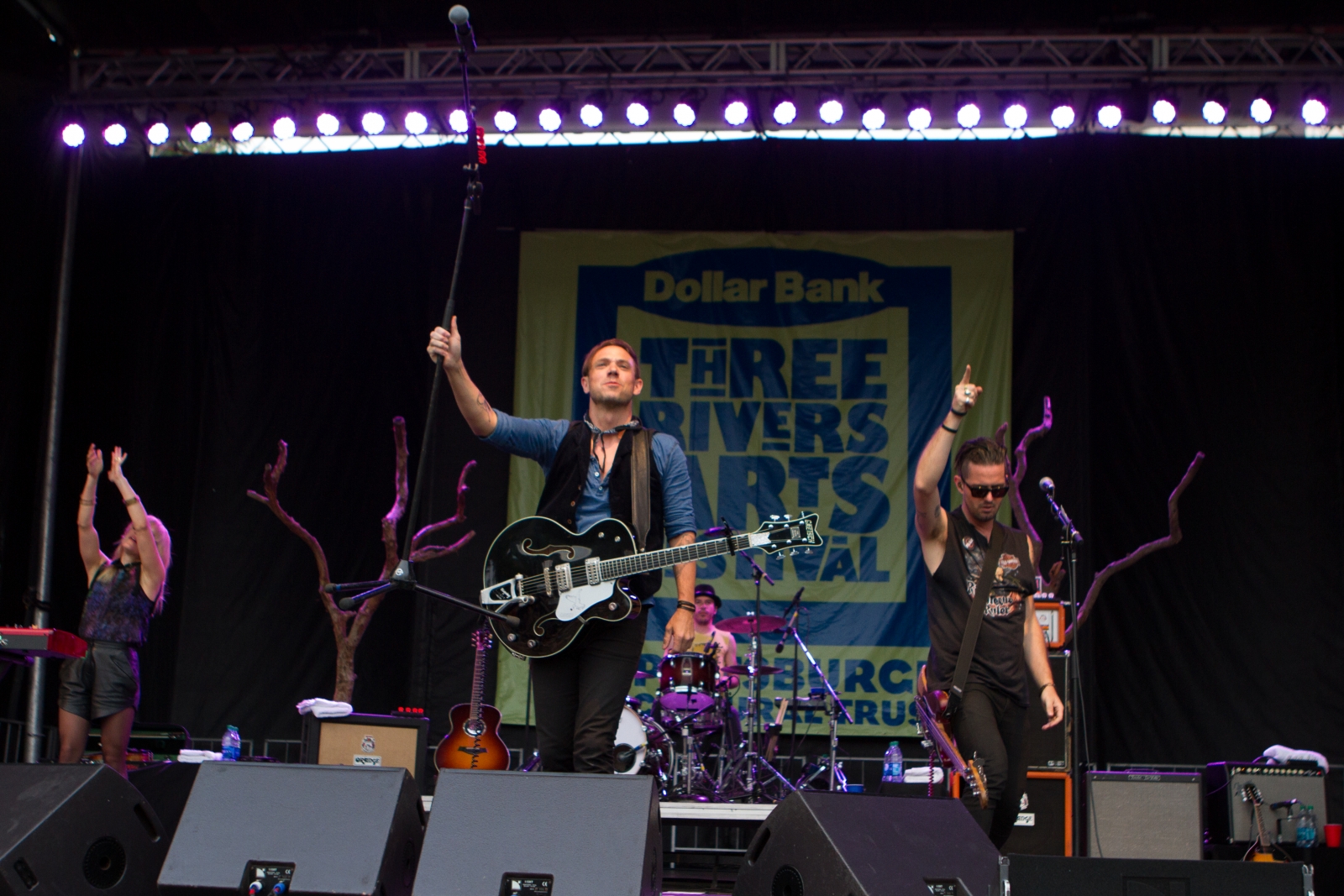 No brief summation can capture all there is to experience at the Dollar Bank Three Rivers Arts Festival. Name an art form, and it’ll be represented downtown over from tomorrow through June 14 — and most years, someone probably invented a new form just for the occasion.

Exploration is the best way to handle this embarrassment of riches; dedicate a day to wandering around downtown, sampling bits of this and that. If you’re like many festivalgoers, though, you’ll pick the day to go based on the headlining musical acts that take the Dollar Bank Stage when the sun begins to set.

Here’s a rundown of this year’s main events. Any other time, you’d pay good money to see these world-class acts; at the arts fest, you get them in an awesome environment, surrounded by summer sun, carnival food and the arts, free of charge. All headliners are set to perform from 7:30-9 p.m., unless otherwise noted.

Friday, June 5 — Jenny Lewis
Rilo Kiley, Lewis’s former outfit, helped to set the tone for the indie explosion in the mid-2000s, while jumping genres from introspective folk to alt-country to dancefloor pop. Many aficionados prefer the careful, soulful melodies of her solo work, though; 2006’s “Rabbit Fur Coat” is a minor classic, and last year’s “The Voyager” was critically lauded. Indie rockers All Dogs will open for Lewis, taking the stage at 6:30.

Saturday, June 6 — Railroad Earth
You’ll hear plenty of picking over the course of this year’s Bluegrass Day, with a lineup of rootsy acts — also including Elephant River, the Allegheny Drifters, Border Ride and Jakob’s Ferry Stragglers — lasting from noon into the night. You may be surprised by the diverse sounds offered by headliners Railroad Earth, though, weaving Americana genres into a sweet, folky base.

Sunday, June 7 — Alvvays
The forecast calls for a clear, warm summer night on Sunday — the perfect conditions for the nostalgia-soaked, poppy indie rock produced by Toronto-based Alvvays. The act’s self-titled, debut album was a huge college hit last fall. Alvvays are headlining WYEP Day at the fest, and similarly minded acts will take the Dollar Bank Stage throughout the day.

Monday, June 8 — Pittsburgh Symphony Orchestra with the Pittsburgh Opera
The annual tradition continues, as the PSO takes to the open air for an evening of free opera and classical. If you need convincing, remember that this is quite possibly your only opportunity to enjoy world-class performances of Western Civilization’s best music while eating a corn dog.

Tuesday, June 9 — The Felice Brothers (7-8 p.m.) and Hurray for the Riff Raff (8:30-9:30 p.m.)
The upstate New York country-folk rockers have toured with Bright Eyes, performed as part of the late Levon Helm’s famous Midnight Rambles and seen two albums reach the Top 10 of Billboard’s Heatseekers chart — not bad for a band that started out playing in subway stations. Later in the night, you’ll be dazzled by the pinpoint folk of Hurray for the Riff Raff — she’s a Bronx native raised on Motown and R&B, but if you didn’t know any better, you’d think she’d grown up deep in the heartland.

Wednesday, June 10 — Milo Greene (8:30-9:30 p.m.)
If you’re like me, you swear that the best indie music has a heavy dose of ’80s sheen running through it. That’s definitely the case with Milo Greene; the act’s cinematic pop-rock compositions, as breathily belted by one of the band’s four lead singers, have beats out of a 30-year-old Top 40 chart despite a distinctly modern tone. Hey Marseilles and local indie favorite Donora perform earlier in the evening.

Thursday, June 11 — Rhiannon Giddens
A frequent collaborator of folk mastermind T. Bone Burnett, Giddens’ music exists at perhaps the best possible intersection of soul, folk and the blues. A Grammy winner as a member of the Carolina Chocolate Drops, Giddens was part of the lineup for “Lost on the River: The New Basement Tapes,” an album of songs culled from disused Bob Dylan lyrics, along with Elvis Costello, Taylor Goldsmith, Jim James and Marcus Mumford. Jimbo and the Soupbones will open Thursday’s show.

Saturday, June 13 — Neko Case
The songs Neko Case recorded with pop-alt titans The New Pornographers are some of the best power pop of the 21st century — but they don’t scratch the surface when it comes to the breadth of talent Case has to offer. Her acclaimed solo records include the moving “Fox Confessor Brings the Flood” and the Grammy-nominated “Middle Cyclone,” her highest-charting record. Jennifer O’Connor will take the Dollar Bank Stage before Case.

Sunday, June 14 — Benjamin Booker
Those fortunate enough to have scored tickets to last summer’s epic Jack White performance at Stage AE are familiar with Booker, who opened for White for much of the latter artist’s 2014 tour. Like White, Booker is a guitar virtuoso, alternating mid-song between rock power and dazzling riffs.