CMU-created Viewseum takes potential entrepreneurs to the top of the US Steel Building. 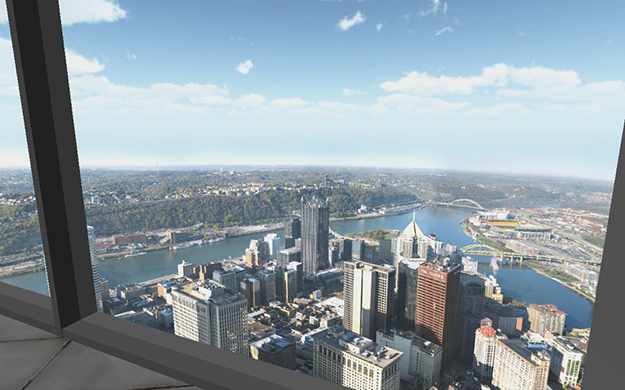 CMU-CREATED VIEWSEUM TAKES PROSPECTIVE BUSINESS OWNERS ON VIRTUAL TOUR OF US STEEL BUILDING
When you get a load of the Carnegie Mellon University ETC’s (Entertainment Technology Center) Viewseum project, you’ll forget everything you thought you knew about the power of advertisement.

With a virtual public showcase set to interactively browse the one-acre rooftop of the US Steel Building (which may undergo a rooftop expansion in the future), soon-to-be businesses can visualize and explore the options of setting up a workplace in Pittsburgh’s tallest skyscraper. These 12 video game-like kiosks — a high-budget, multiple-year scheme — are being designed by CMU programmers with one desire: to open doors for businesses by allowing them to realize the imaginary.

What is to the untrained eye a vast lot of unused commercial space becomes so much more if one has access to the eye-opening Viewseum world. In a simple online journey, a prospective business owner holds in his or her hands the unique capability of accessing what could be, financially, physically or otherwise.

PITT RESEARCHERS ANALYZE SYNTHETIC MATERIALS
University of Pittsburgh biomedical engineers are on to a brand-new scent in the field of devising ways of synthesizing materials that are identical to many of the body’s vital microscopic regulating components. As Pitt research team co-investigator Anna Balazs puts it, “Our design is a much more active way of continuously sensing and regulating the temperature. It’s another step toward making smart materials that are just as conscious of their internal workings as the human body is of its inner mechanisms.”

Balazs also makes an important contrast between relatively primitive forms of regulation and her team’s model: “Consider, for example, what happens when a typical hair dryer becomes too hot: The device just shuts off. The hair dryer does not, however, turn itself back on when the system has cooled down.”

These biomedical movers and shakers, in alliance with engineers from Harvard University, have concocted a never-before-seen oscillatory network of synthetic components that are, individually, far from perfect substitutes for the “real deal” (in other words: natural anatomical features). In combination with one another, however, these components mimic nature

RMU PROFESSOR KEEPS THE MUSIC PLAYING, DESPITE SETBACKS
Earlier in life, Heather Pinson played the violin and played it well. Now, in addition to being somewhat of a master of several musical styles, she teaches communications and media arts at Robert Morris University, knows the popular music industry like the back of her hand and has become what she calls “a critical consumer of how music is marketed.”

And she has done all of this despite a sizable roadblock: a bone disease common among musicians as a result of overuse of the hands and wrists called Kienboch’s syndrome. “I boo-hooed for nine months,” Pinson, who's now the interim head of RMU's Department of Communication. “It just wasn’t in the cards for me to be a classical diva.

With hard work and the guidance of a local jazz club, she soon began to overcome the disadvantages of having a metal plate for a wrist bone, playing with a new style, a new vigor. Pinson now leaves each of her students with a piece of her new-found musical three-dimensionality.

This article appears in the July 2012 issue of Great Minds.
Categories: Great Minds