Six More Things You Might Not Know about Pittsburgh

The thing that annoyed a young Andy Warhol. A typo broadcast over the city skyline. And how our first mayor outwitted hostile natives at age 13. All of this and much more in the latest edition of Things You Might Not Know About Pittsburgh! 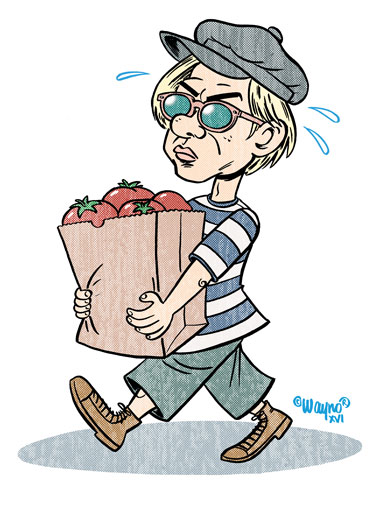 Step Right Up … And Up:
The inclines weren’t always the only way to scale the face of Mount Washington. In 1910, an ordinance was introduced to “build steps up the side of the bluff to Grandview Avenue following the old Indian trail,” according to the Pittsburgh Daily Post. Starting in 1935, this 2,400-foot stairway was used by those who couldn’t afford the incline fare. It was made up of 628 steps, “miles of wood, and enough gray paint to coat a battleship.” The steps were mostly gone and unusable by the 1940s, leaving us with our current options to get to Grandview: McArdle Roadway, an incline or getting drunk enough to attempt to free-climb it.

A Different Kind of Amusement:
The “Park” in Kennywood Park’s name has a deeper historical meaning than you probably realize. When the Monongahela Street Railway Company opened Kennywood Park in 1899, it was a park-like attraction billed as picnic grounds. In addition to a dancing pavilion, the park featured several small lakes, cottages, a bowling alley, tennis courts, a bicycle racing track and even a baseball field. A far cry from the coaster-rich Kennywood we know and love (and eat our way through) today.

At Least They Didn’t Drop the H:
Outside of a Bucs home run or a Penguins goal, you need a 10-page PDF to figure out what the weather-forecasting light display atop the Gulf Tower is telling you. But the beacon atop the Grant Building has been spelling out the same word in Morse Code since 1928 … P-I-T-T-S-B-U-R-G-H. Except during malfunctions; at various points, it has been spotted spelling out PITETSBKRRH and TPEBTSAURGH.

From Huckster to Artist:
efore achieving international fame, Andy Warhol was an 18-year-old Carnegie Tech student who spent the summer of 1946 selling vegetables from a wagon in Oakland and Homestead. He used the experience as inspiration for a series of sketches skewering the “new-rich” of Pittsburgh who made him “carry a pound of tomatoes to a sixth-floor apartment just to impress their friends.” That November, those sketches earned him a $40 Leisser Art Fund award. Of particular annoyance to the young Andy? Those who would squeeze the tomatoes. Makes you wonder if that’s why he chose the tomato soup can all those years later.

Risky Move:
In 1904, H.J. Heinz decided he wanted the house in which he built and started the Heinz company to serve as a museum near his plant on the North Side. There was just one small problem: The house was 5 miles away in Sharpsburg. Heinz hired a local company to uproot the two-story brick house, roll it 800 feet to the Allegheny River and float it via barge to the North Side as a crowd looked on. In 1952, it was dismantled and rebuilt in Greenfield Village, Mich., where it sits today.

Just Like in the Movies:
Since I last wrote about Pittsburgh’s first mayor, war hero Ebenezer Denny, I learned he became a message dispatcher for the Fort Pitt regiment by begging his father for permission to enlist — despite being just 13. Young Ebenezer did most of his riding at night to avoid detection, but once while nearing Fort Ligonier, he tried to finish the trip in the day … only to be met by three hostile Native Americans. Ebenezer put his horse in a full sprint while they fired guns. After rounding a sharp curve, he dismounted, removed the long leather rein, stretched it across the path, and then watched as the indians’ horses hit the obstacle and tumbled down the hillside, allowing him to ride on. So what were you doing when you were 13?