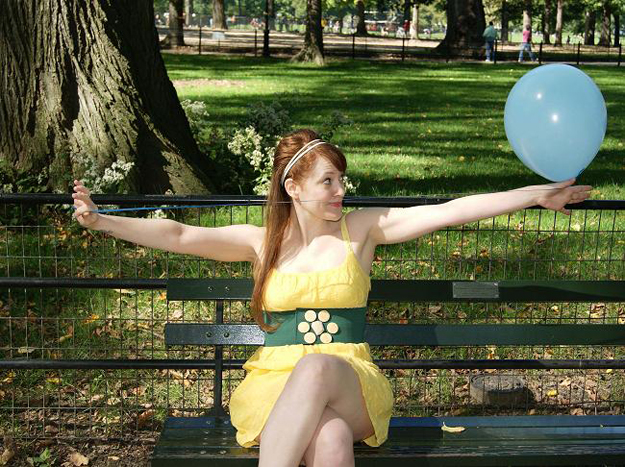 “I decided, what can I give up? And I absolutely cannot give up singing.”

When Irwin native Parry Adams made that decision, she was going through a process familiar to most young Americans (especially those involved in the arts.) With clear career paths and easy job placement a thing of the past, more and more talented college grads find themselves doing a little bit of everything for a long while.

That was certainly the case for Adams. After graduating from Point Park University with a degree in Musical Theater, she bounced around the country, from Pittsburgh to Cincinnati to New York to Atlanta. She danced professionally for several years, she acted, she sang in bars. She made coffee, inevitably. She started to get some poems published.

“I had a poem chosen for a compilation called A Sea of Treasures, and that evolved into songwriting. And then I became friends with [musician] Bryan Fenkart, who I’ve been backing up for six years—he really encouraged my songwriting. I took up the guitar and went back to playing the piano.”

After years of honing her style, Adams has completed a five-song E.P., Puzzle Piece. Her songs are sweet, simple melodies, starkly arranged but beautifully performed. Her careful songwriting and soulful voice lead the way on tracks refreshingly free of over-production and digitized revisions.

“I’m a singer. I want people to know that this is my voice. It’s not dressed up with auto-tune or a ridiculous amount of reverb. When you go to the theater, you expect to hear as close to perfection as you would hear on an album. That’s where I want to stand from. When you come out to see me, my voice shouldn’t sound like it needs more help.”

This weekend marks Adams’ first homecoming as a solo performer. While growing up in Irwin, she did the musicals at Norwin High School and Greensburg Civic Theater. She could be seen on the Pittsburgh Playhouse stage during her days at Point Park. So to return to the area not as a face in the Playbill, but on her own tour, with her name on the marquee—that’s a big homecoming.

She’ll be joined by guitarist Joe Stile in a late-night set at South Side’s Club Cafe this Friday night. There may be no more appropriate venue for Adams; her emotive and sincere performances are boosted by the intimacy that a venue like Club Cafe provides. Get there early, though; it looks like you’ll have to fight some loved ones off to find room in the club. Parry has a lot of proud folks at home gearing up for this one.

“With the release of the EP, I’ve really tried to get in contact with everybody to let them know. I’m really, really excited for this show. A lot of my family hasn’t seen me perform. It’s really exciting for me.”

This article appears in the December 2011 issue of After Dark.
Categories: After Dark